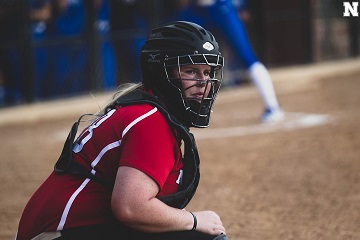 Cathedral City, Calif. — Nebraska (5-5) fell to No. 3 Oklahoma on Friday at the Mary Nutter Collegiate Classic by a score of 10-2 in its first of two games on the day.

Samantha Owen, Keana “KP” Pola and Brooke Andrews each had one hit against the Sooners.

Courtney Wallace (1-2) started and pitched the entire 4.0 innings. She gave up 10 runs – nine earned – on 10 hits and recorded three strikeouts.

OU’s Brooke Vestal (1-0) pitched 3.0 innings of relief. She gave up one hit and had one strikeout.

Oklahoma got off to a hot start, scoring six runs in the first off six hits.

In the second, the Huskers cut the lead to 6-2. Owen got a leadoff double and Pola homered to put the Huskers on the board. The Sooners added four more runs in the bottom of the inning.

In the top of the fifth, Boruff reached on a fielder’s choice and stole second. Edwards hit by a pitch to put two runners on with no outs, but a fly out would end the game due to the mercy rule.

Cathedral City, Calif. — Nebraska (5-6) fell to BYU (7-5) by a score of 4-1 in its second game of the day on Friday at the Mary Nutter Collegiate Classic.

The Huskers had five hits on the day. Tristen Edwards went 2-for-3, while Cam Ybarra, Ally Riley and Rylie Unzicker each had one hit as well for Nebraska.

BYU’s Aris Paulson improved to 4-1 on the season. She pitched 4.0 innings and gave up one run on four hits. She also had three strikeouts.

Edwards hit a leadoff single in the first to start the Huskers off. She moved to second on a groundout and reached third on a fly ball, but NU couldn’t bring her around to score a run.

A solo homer for BYU in the second gave them a 1-0 lead.

The Cougars scored another run in the third after three singles. In the bottom of the inning, Rylie Unzicker drew a walk and Edwards singled to put runners on the corners. Edwards stole second to get in scoring position but BYU got out of the inning without allowing a run.

The Huskers got on the board in the fourth. Owen and Huscroft each drew a walk and Riley doubled to cut the lead to 2-1. Andrews reached on a fielder’s choice that got the tying run out at home. With two outs and runners on the corners, Andrews stole second and Unzicker drew another walk to load the bases but a pop up ended the inning.

In the fifth, Ybarra singled and Bree Boruff pinch ran for her but three straight outs ended the inning.

In the top of the seventh, BYU capitalized on a pair of Husker errors and scored two unearned runs to go up 4-1. In the bottom of the inning, Nebraska got two runners in scoring position with two outs but a ground out ended the game.

Nebraska continues the Mary Nutter Collegiate Classic on Saturday when the team takes on Cal (4:30 p.m. CT) and No. 2 Washington (7 p.m. CT).