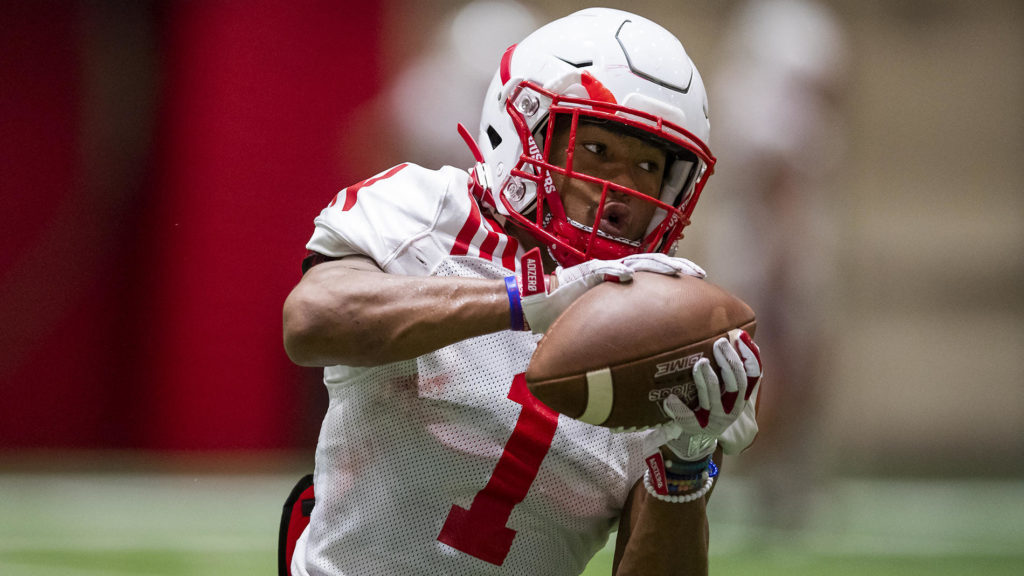 Lincoln — The Nebraska football team practiced in full pads for the first time during fall camp on Wednesday, working out for nearly two hours while splitting time inside the Hawks Championship Center and outside on the Ed and Joanne Gass practice fields.

Offensive Coordinator Troy Walters spoke to the media following practice and talked about the direction of practice and the competition he has seen within the offense.

“The theme of this camp is really, competing on both sides of the ball,” Walters said. “The defense is making us a whole lot better. Those guys are getting after it, we have to compete with them, and then competition within each position has been great. It’s been a good camp.”

Walters spoke highly of freshman wide receiver Wan’Dale Robinson and how he has taken care of his body throughout the summer.

“He’s (Robinson) looked good,” Walters said. “He’s staying healthy, that was the key in spring, he was nicked up a little bit, so he’s doing a good job of taking care of his body. He did a good job in the summer taking care of his body. He’s everything that we hoped for. He keeps getting better, he makes plays as a receiver, he is making plays as a running back. That dual threat option is going to cause challenges for opposing defenses.”

Walters also commented on the defense and how the unit has challenged the offense to protect the football.

“The entire defense is flying around,” Walters said. “The defensive staff is doing an excellent job of getting those guys to play with a lot of energy, enthusiasm, they’re flying around and they’re creating turnovers. That’s one of the things as an offense, we have to do a better job of protecting the football. Those guys are trying to strip it and create turnovers.”

Walters, who also coaches the Husker wide receivers, was asked about the progress of the freshmen wideouts.

“I like what they’re doing,” Walters said. “Darien Chase is a big target, he’s picking up the offense well, solid receiver, good hands. Demariyon Houston, he’s more of a speedster. We tell the freshmen to dive in, don’t dip your toe in the water. It’s hard for those guys because they’re not used to the speed and physicality and sometimes, they’re kind of going through the motions, trying to feel things out. As we’ve gone along in camp they have gotten faster and understand what the expectations are and so I’m very pleased with their performance so far.”

The Huskers will be back on the practice field Thursday morning, and head coach Scott Frost will address the media after practice on Friday.