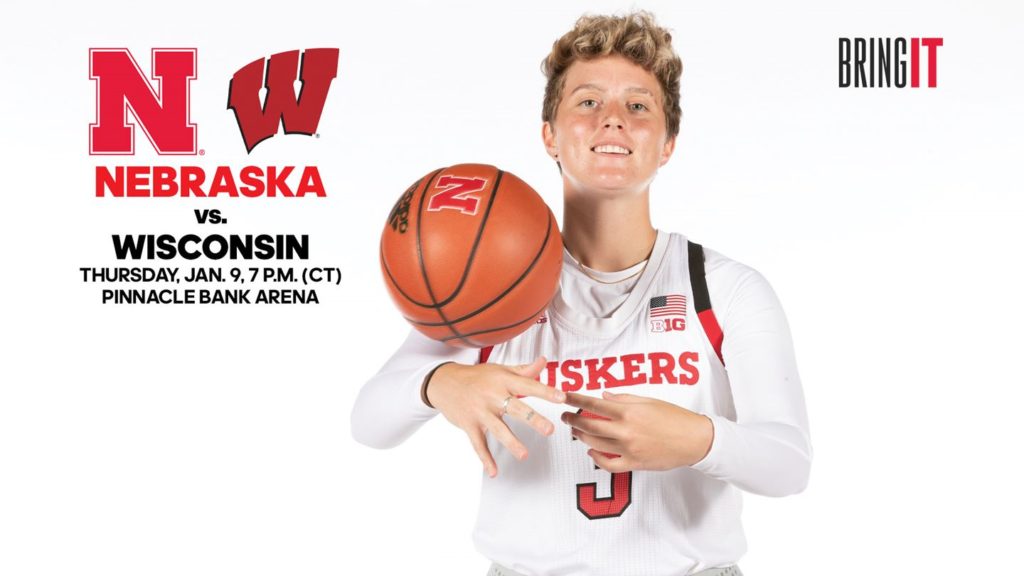 The Nebraska women’s basketball team returns to Pinnacle Bank Arena on Thursday night hunting for another Big Ten Conference home win when the Huskers take on Wisconsin. Tip-off between the Huskers (12-2, 2-1 Big Ten) and the Badgers (9-5, 1-2 Big Ten) is set for 7:05 p.m. (CT) with tickets on sale now at Huskers.com. Tickets can also be purchased at the Pinnacle Bank Arena Box Office beginning 90 minutes before tip-off.

Live statewide television coverage will be provided by NET with Thor Tripp and Jami (Kubik) Hagedorn on the call. The NET production also will be used for the BTN+ video stream.

Live radio coverage for Thursday’s game can be heard on B107.3 FM and 1400 AM KLIN in Lincoln along with ESPN 590 AM in Omaha beginning at 6:45 p.m. (CT). Stations across the state will also carry the broadcast on the Learfield IMG College Husker Sports Network. Free live audio can be found at Huskers.com, the Huskers App and TuneIn.

Nebraska notched its second Big Ten home win with a 72-58 victory over then-No. 24 Minnesota on Saturday at Pinnacle Bank Arena.

Cain, a Lisa Leslie Award candidate, continued her strong open to Big Ten play with season highs of 19 points and 15 rebounds to go along with six blocked shots. In league play, Cain is averaging 15.0 points, 13.7 rebounds and 3.7 blocks. She leads the Big Ten in blocks per game while matching Wisconsin’s Imani Lewis for the conference lead in rebounding during league play.

Hannah Whitish played big for the Huskers in the win over Minnesota with a season-high 17 points while matching her season high with five three-pointers. The senior from Barneveld was the 2016 Wisconsin High School Player of the Year. She is the first Husker in history to reach the combined career milestones of 1,000 points (1,084), 400 assists (416) and 200 three-pointers (223).

Fellow sophomore Leigha Brown leads Nebraska overall in scoring this season at 13.7 points per game off the bench. She is a leading contender for Big Ten Sixth Player of the Year honors, and is the only Big Ten player to rank among the top 30 in the league in scoring without making a start.

Scouting The Wisconsin Badgers
• Head coach Jonathan Tsipis brings his fourth Wisconsin team into Thursday’s game at Nebraska following a 71-65 win over Penn State at the Kohl Center in Madison. The Badgers are 9-5 overall and 1-2 in the Big Ten.
• Last season, Wisconsin finished with a 15-18 overall record that included a 4-14 Big Ten mark. The 15 wins for the Badgers were their most since 2010-11 (18-15), which was also their last winning season in women’s basketball.
• Tsipis, who is 42-66 in his four seasons at Wisconsin, has his Badgers taking pride in their defense. Wisconsin is allowing just 60.9 points per game and has not allowed an opponent to score 75 in any game this season. Colorado (74) and Purdue (72) are the only two Badger foes to hit 70.
• Last season, the Badgers defeated Nebraska, 70-69, on a Kelly Karliss buzzer-beating three-pointer in the corner in Madison (Jan. 27, 2019).
• Wisconsin is led by outstanding sophomore Imani Lewis. The 6-1 forward is averaging team bests of 14.3 points and 8.5 rebounds per game, including 20.0 points and 13.7 boards in Big Ten play. She has taken more than 25 percent of UW’s shots in league play. She had 23 points and 14 rebounds in Saturday’s win over Penn State. She had 17 points and seven boards in last season’s win over Nebraska.
• Senior Abby Laszewski, a 6-3 forward, has added 11.8 points and 7.0 rebounds on the season, including 13.3 points and 7.7 boards in Big Ten play. Neither Lewis nor Laszewski have attempted a three-pointer for the Badgers this season.
• Freshman Sydney Hilliard has made an immediate impact. The 5-11 guard is averaging 10.3 points and 5.8 rebounds on the season and has started all three Big Ten contests. She has also matched senior point guard Kendra Van Leeuwen for the team lead with 16 steals.
• Van Leeuwen has averaged 6.4 points, 4.1 rebounds and a team-best 4.4 assists.
• Junior Niya Beverley rounds out Wisconsin’s starting five with 7.2 points and 2.2 rebounds per game. Beverley erupted for 19 points in the win over Penn State after managing just 10 points combined in UW’s Big Ten losses to Rutgers (64-61) and at Purdue (72-61). Beverley ranks third among the Badgers with 11 made three-pointers. Beverley played a huge role in Wisconsin’s win over Nebraska last season with 10 points, four rebounds, five assists and four steals.
• Senior Suzanne Gilreath leads Wisconsin from long range with 23 three-pointers on the year, but she is 0-for-6 from three-point range in Big Ten play early this season. Gilreath is averaging 6.2 points per game off the bench, but has not scored in Big Ten play.
• Freshman Julie Pospisilova has added more pop from long range with 14 threes on the season. Pospisilova started nine non-conference games and is averaging 5.9 points per game on the season. However she has opened Big Ten play just 2-for-15 from the field, including 2-for-9 from three.
• Freshman Tara Stauffacher is the only other Badger to find the scoring column so far in Big Ten play. Stauffacher, a 5-11 forward, is averaging 3.0 points and 2.8 rebounds on the season and has scored four total points in three Big Ten games.
• As a team, Wisconsin is averaging 66.1 points per game on the season while shooting 41 percent from the field, including 29.8 percent from three-point range. UW is averaging just 4.9 threes per game. In last season’s win over Nebraska went just 2-for-10 including the game-winner at the buzzer. • In Big Ten play, Wisconsin is shooting just 36.9 percent from the field, including 22.5 percent (9-40) from three-point range. UW owns a plus-3.5 rebound margin on the season but a minus-0.4 turnover margin. However, the Badgers own a plus-3.0 turnover margin in Big Ten play after forcing 26 turnovers by Penn State (+8) on Saturday.
• For the season, Wisconsin is holding opponents to just 36.8 percent shooting from the field, including 30.2 percent from long range.

Nebraska vs. Wisconsin Series History
• Nebraska leads the all-time series with Wisconsin, 9-7, including a 51-48 win over the Badgers at Pinnacle Bank Arena on Feb. 11, 2018. All nine of Nebraska’s victories over the Badgers have come as Big Ten foes.
• The Badgers have won back-to-back games against the Huskers in Madison, including the 70-69 win over the Huskers at the Kohl Center on Jan. 27, 2019. Nicea Eliely hit a driving layup with 0.7 seconds left to give the Huskers a 69-67 lead, before Kelly Karliss answered with a three-pointer in front of the Wisconsin bench as time expired. Taylor Kissinger led Nebraska with 15 points, while Kate Cain added 14 points and seven rebounds. Hannah Whitish and Nicea Eliely each had 12 points. Marsha Howard led Wisconsin with 18 points and seven boards.
• Wisconsin rolled to an 82-56 win over the Huskers in Madison on Feb. 9, 2017, for the largest margin of victory in the series. Despite the back-to-back wins for the Badgers in Madison, the Huskers have won nine of the last 11 meetings in the series.
• Nebraska meets Wisconsin at the Kohl Center in Madison on Saturday, Jan. 25, at 11 a.m. (CT) in a game televised by BTN.
• The Huskers are 9-2 against the Badgers as Big Ten Conference opponents, including 5-0 in Lincoln and 3-0 at Pinnacle Bank Arena. Nebraska is 4-2 against Wisconsin at the Kohl Center. Nebraska’s first three wins at the Kohl Center were by a combined nine points, including a 71-70 OT win on Feb. 5, 2014, a 55-53 win on Feb. 28, 2013, and a 75-69 win on Jan. 12, 2012 – the first meeting between the schools as Big Ten foes.
• Wisconsin won the first five meetings between the two school as non-conference opponents, including a pair of overtime victories at the Devaney Center in Lincoln and three wins in Madison. All five of the non-conference meetings between the schools were decided by 10 or fewer points.
• Overall, 12 of the 16 all-time meetings have been decided by 10 or fewer points, including three overtime contests.