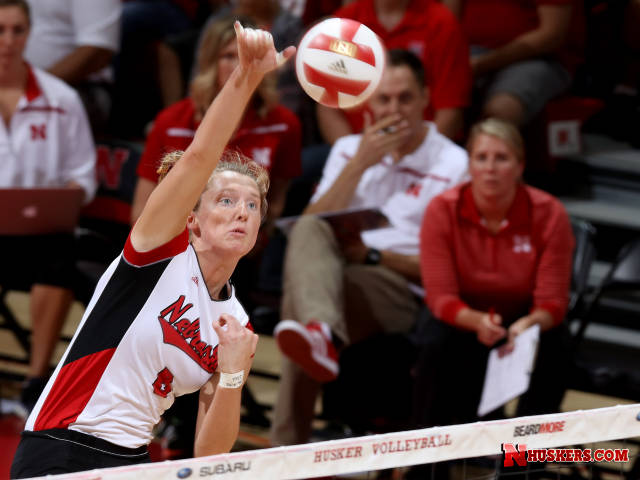 ALBUQUERQUE, N.M. – The No. 1 Nebraska volleyball team battled past New Mexico for a 25-22, 25-20, 25-14 sweep on Saturday in the final match of the Lobo Classic. It was the Huskers’ first true road match of the season and came in front of 4,473 fans at The Pit. Andie Malloy led the Huskers (6-0) for the second straight match with 14 kills on .385 hitting and was selected to the all-tournament team. Kadie Rolfzen added nine kills and a match-high 16 digs and was named the most valuable player of the tournament. She moved to 11th on Nebraska’s career kills list with 1,256.

Kelly Hunter was also on the all-tournament team with 39 assists, seven digs, four kills and four blocks. Amber Rolfzen tallied eight kills with no errors for .667 hitting on the night and also had three blocks. Mikaela Foecke had eight kills, and Briana Holman had five to go with her match-high six blocks. Cassie House had 12 kills to lead the Lobos (6-3), who finished second in the tournament with a 2-1 record. The Huskers outhit the Lobos .311 to .110 and had a 9-5 edge in blocks. Five of the nine blocks came in the final set as the Huskers finished the match on a strong note. Nebraska served five aces and fell victim to just one from the Lobos. NU had a 43-38 lead in digs.