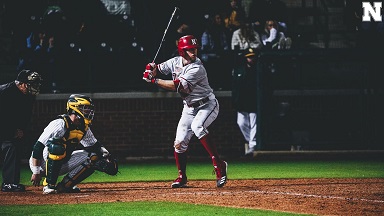 Waco, Texas – The Nebraska baseball team (1-0) scored 11 runs in the first inning on its way to a 19-9 win over Baylor in the opener of the Will Bolt Era at Baylor Ballpark on Friday night.

Senior left-hander Gareth Stroh, making his Husker debut and 32nd career NCAA Division I start, threw 5.1 innings and picked up the win. He tallied four strikeouts and allowed only one walk, while giving up five runs (four earned runs). Trey Kissack (1.2 innings), Braxton Bragg (0.1) and Tyler Martin (1.2) each made relief appearances for the Big Red.

Nebraska’s 11 runs in the first inning were the most runs in an inning since March 10, 2018 when the Huskers plated 13 runs in the sixth against Cal Poly. The first 11 batters reached base and scored, as each of NU’s first five batters singled, before Baylor recorded its first out. Every Husker batter touched the plate for a run at least once during the frame. In the bottom of the first, Stroh retired the Bears 1-2-3 with two flyouts and a strikeout.

In the top of the second, Acker laced a leadoff single before each of the next three Husker batters produced outs. Baylor scored two runs on three hits in the bottom of the second.

NU added one run in the top of the third to extend its lead to 12-2. Aaron Palensky drew a leadoff walk before Luke Roskam walked. Ty Roseberry drove in Palensky with a two-out RBI single before a strikeout ended in the inning. The Bears managed one run on two hits in the bottom of the third.

NU managed two baserunners in a scoreless top of the fifth. In the bottom of the fifth, Baylor scored one run to cut NU’s lead to 12-4. The Bears managed two hits, while the Huskers committed one error during the fifth.

Chick drew a walk in the top of the sixth, but each of the other three Husker batters during the frame were retired. Baylor’s Chase Wehsener hit a solo home run to trim the score to 12-5. Baylor stranded two runners in the bottom of the sixth.

Nebraska plated four runs in the top of the seventh to extend its lead to 16-5. Roskam and Leighton Banjoff drew back-to-back walks to open the frame before advancing to second and third on a sacrifice bunt. Acker hit an RBI single before Drew Gilin produced an RBI single of his own. Cam Chick drove in two runs with a triple. In the bottom of the seventh, Baylor’s first two batters reached, but a double play and flyout kept the Bears from scoring.

In the top of the eighth, the Huskers added three runs to build a 19-5 lead. Palensky was hit-by-pitch in the leadoff spot before Roskam doubled. Roseberry ripped an RBI single and Acker drove in a run with his double during the inning. Baylor tallied four runs in the bottom of the eighth to make the score 19-9.

The Huskers went down in order in the top of the ninth. Baylor managed one baserunner via walk in the bottom of the ninth, but three flyouts ended the game.

The Huskers and Bears continue their three-game series on Saturday, starting at 2 p.m. (CT). The series concludes on Sunday at 1 p.m.