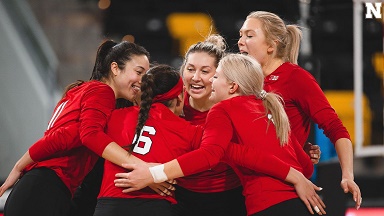 CORALVILLE, Iowa – The fifth-ranked Nebraska volleyball team posted its eighth sweep in 13 matches this season with a 25-19, 25-21, 25-11 win over Iowa at XTream Arena on Wednesday night.

Lexi Sun had 14 kills and 12 digs with a pair of aces. Madi Kubik had 10 kills and hit a season-best .364, and Lauren Stivrins had eight kills on .615 hitting to go with three blocks. Kayla Caffey and Jazz Sweet both had seven kills. Sweet turned in her best match of the year, hitting .417 with seven kills and two errors on 12 swings.

Nicklin Hames set the balanced attack with 37 assists, seven digs and three kills. Kenzie Knuckles had 11 digs and Keonilei Akana had 10. The Huskers had a 49-37 digs advantage.

The teams will meet again on Saturday at the Bob Devaney Sports Center at 6 p.m. The match will be televised on NET and streamed on the FoxSports platform. Husker Sports Network will call the action on HSN affiliates, the Huskers app and Huskers.com.

Set 1: Nebraska went out to an 8-4 lead but surrendered a 9-3 Iowa run that put the Hawkeyes up 13-11. Nebraska committed three service errors and three unforced attack errors to allow Iowa to go in front. Trailing 17-15, Nebraska got a kill from Sun and then benefited from three straight Iowa hitting errors that made it 19-17 Huskers. Kills by Sweet, Kubik and Hames made it 22-19 Big Red, and Sun tacked on a kill before Akana finished the set at 25-19 with an ace.

Set 2: The Huskers led 7-2 after a block and kill each by Hames and Stivrins. Nebraska increased its lead to six at 15-9 after consecutive kills by Kubik and Sun. But Iowa answered with a 5-0 run to cut it to 15-14. Sun kept the Huskers in front with back-to-back kills that made it 17-14. After Iowa pulled within 17-16, Caffey terminated a kill and then combined with Sun for a block. The junior middle blocker put down yet another kill to help the Huskers back to a four-point lead, 20-16. After Iowa got back within two, the Hawkeyes committed a service error before Sweet added a kill and Sun served an ace to make it 23-18. Another kill by Sweet earned set point at 24-21 and the Huskers closed it out at 25-21.

Set 3: Nebraska set out to finish the sweep, taking a 7-1 lead with Kubik serving a 5-0 run for the Big Red while four different Huskers registered kills early on. The Huskers continued to pour it on with kills by Caffey, Stivrins and Kubik to go up 17-6. Kubik and Stivrins teamed up for a block to make it 19-7, and Kubik and Caffey added kills down the stretch as the Huskers pulled away for a 25-11 win, their most decisive set win of the season. NU hit .429 in the third set and held Iowa to -.032 hitting.