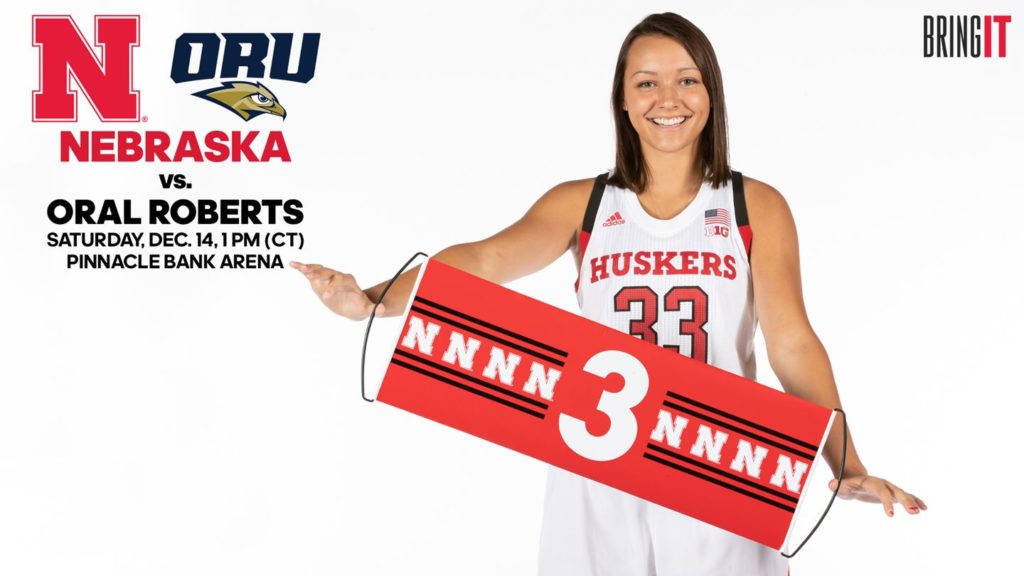 The Nebraska women’s basketball team heads into the final stretch of non-conference play taking on Oral Roberts on Saturday afternoon in Lincoln. Tip-off between the Huskers (8-1) and Golden Eagles (4-6) is set for 1 p.m. (CT) at Pinnacle Bank Arena, with tickets available now through the Nebraska Athletic Ticket Office at Huskers.com.

A live video stream will be provided to subscribers of BTN+ as a BTN Student U production.

Live radio coverage for Saturday’s game with ORU can be heard on B107.3 FM in Lincoln and ESPN 590 AM in Omaha beginning at 12:45 p.m. (CT). Stations across the state will also carry the broadcast on the Learfield-IMG College Husker Sports Network. Free live audio can be found at Huskers.com, the Huskers App and TuneIn.

Saturday’s game will also feature a halftime performance by the KC Disc Dogs.

Senior guard Hannah Whitish added another mark to her spot in Husker history in Nebraska’s 83-79 win over Duke in the Big Ten/ACC Challenge on Dec. 4. Whitish dished out three assists on Nebraska’s first three baskets of the night to reach 400 career assists. In the process, she became the first Husker to reach the combined career milestones of 1,000 points (1,042), 400 assists (403) and 200 three-pointers (213).

Whitish, a two-time All-Big Ten guard, finished with 10 points and a season-high six assists in the win over the Blue Devils, scoring Nebraska’s final four points at the free throw line to seal the win.

Junior Taylor Kissinger led Nebraska with a season-high 19 points and a career-high-tying six three-pointers in the win over Duke. She also tied a career high with four assists. Kissinger is averaging 15.0 points the last two games, after overcoming a concussion suffered early in non-conference play.

Junior Kate Cain, a candidate for the Lisa Leslie Award, added 12 points, five rebounds and five blocks in the win over Duke. Cain moved into a tie at No. 3 on the Husker career block chart (207) with Olympic bronze medalist Danielle Page (2005-08).

Sophomore Ashtyn Veerbeek played an impressive all-around game in the win over Duke with a season-high 14 points on a perfect shooting night that included a career-high-tying three threes. Veerbeek (9.6 ppg) is part of a trio of sophomores leading Nebraska in scoring, including Leigha Brown (13.6 ppg) and Sam Haiby (9.8 ppg).

Scouting Oral Roberts
• Coach Misti Cussen brings her eighth Oral Roberts team to Lincoln with a 4-6 overall record after a 78-58 loss at Utah on Thursday, Dec. 5.
• The Golden Eagles own early season wins over Wichita State (79-66), Sam Houston State, Texas State and Central Christian.
• ORU is 0-5 on the road this season with losses at Arkansas, Kansas State, Tulsa and Southern Utah, joining the setback to the Utes.
• Junior Keni Jo Lippe provides ORU with an explosive presence in the backcourt. The 5-9 guard from Adair, Okla., is averaging 18.7 points, 7.0 rebounds, 2.8 assists and 2.3 steals. Lippe lives at the free throw line, averaging 7.8 free throw attempts per contest. She scored more than 2,300 points at Adair during her high school career.
• Lippe is joined in the backcourt by fifth-year senior Rylie Torrey. An impressive shooter, Torrey is averaging 2.9 made threes per game (29-66, .439) while averaging 14.4 points per game. She erupted for a career-high 25 points while going 5-for-9 from three-point range in the loss at Utah (Dec. 5). It was her third 20-point effort of the season and the second time she had hit five or more threes in a game, joining her season-high six in the win over Wichita State (Nov. 11).
• Another senior, Sarah Garvie adds more experience to the ORU backcourt. Garvie is averaging 8.3 points and 2.1 rebounds while giving the Golden Eagles another dangerous three-point threat. The 5-8 guard is averaging 2.2 threes per game (22-56, .393), including four in the win over Wichita State on her way to a season-high 17 points. She scored more than 2,600 points in her prep career as one of the top-10 all-time scorers in the history of Oklahoma high school basketball.
• Garvie and Torrey, who are both transfers from Northern Oklahoma-Enid junior college, combined for 10 of ORU’s 13 three-pointers (13-30, .433) in the win over Wichita State. As a team, the Golden Eagles also went 16-of-17 at the free throw line in the win over the Shockers.
• Spaniard Montserrat Brotons provides ORU with a strong inside presence. The 6-4 center is averaging 9.5 points and team bests of 7.0 rebounds and 1.4 blocks. A four-year contributor for the Golden Eagles, Brotons has not attempted a three-pointer in her college career.
• Freshman Macy Gore has started all 10 games for ORU and is averaging 5.2 points, 2.7 assists and 1.5 steals. She has also knocked down 10 threes. She and her fraternal twin sister, Karly, led Seiling High School to three straight state titles. Karly Gore, who is averaging 4.6 points and 4.5 rebounds per game off the bench, was the 2018 state tournament MVP.
• Two other freshmen, Gem Summers (4.2 ppg, 1.4 rpg) and Nena Taylor (2.5 ppg, 1.8 rpg) have seen action off the bench for the Golden Eagles.
• Junior Katie Kirkhart earned her first start of the season at Utah, matching Montserrat Brotons with a team-high seven rebounds. The 5-9 Kirkhart, who started 10 games last year, did not score against the Utes and is averaging 2.5 points and 1.9 rebounds so far this season.
• Fellow junior Regan Schumacher joins Brotons as the only Golden Eagles taller than 6-0. The 6-2 Schumacher is averaging 2.3 points and 3.3 rebounds.
• Senior guard Rachel Skalnik rounds out the ORU contributors with 1.6 points and 2.5 boards per contest.
• ORU has been without the services of second-team All-Summit League guard Maya Mayberry, who started all 29 games for the 18-13 Golden Eagles last year. The daughter of former Arkansas All-American, NBA first-round pick and current ORU Assistant Coach Lee Mayberry, Maya averaged 14.1 points per game last season, including a career-high 31 against North Dakota State. She finished 10th in the Summit League in scoring and seventh in three-point percentage (.430) last season.
• Maya Mayberry’s older sister, Kaylan, was a senior guard for ORU in 2016-17 and an All-Summit League pick in her career. As a freshman in 2013-14, Kaylan Mayberry scored 20 points off the bench and hit four threes the last time ORU met Nebraska.
• As a team, ORU is averaging 70.7 points per game but shooting just 37.2 percent from the field. The Golden Eagles have hit 33.6 percent of their three-point attempts and are averaging 8.2 three-pointers made per game. ORU is also an outstanding free throw shooting team, hitting 77.4 percent of their attempts. ORU owns a plus-4.7 rebound margin but a minus-1.7 turnover margin.

Nebraska vs. Oral Roberts Series History
• Nebraska is 6-0 all time against Oral Roberts with all six meetings coming in Lincoln.
• Saturday’s meeting marks ORU’s second visit to Pinnacle Bank Arena, joining an 89-53 loss to the Huskers in their inaugural season at PBA on Dec. 29, 2013. That Husker victory capped a 10-2 non-conference season for a Nebraska team that went on to win the Big Ten Tournament title.
• The series with the Golden Eagles dates back to a 100-87 Nebraska win over ORU at the Bob Devaney Sports Center on Nov. 27, 1987.
• The largest margin of victory in the series for the Huskers was a 110-61 (+49) win over ORU on Dec. 5, 1989.
• In 2012-13, the Huskers worked their way to an 80-67 victory on Dec. 20, 2012. It matched their narrowest victory margin (+13) in the series and the last time the two teams met at the Devaney Center. That Nebraska team advanced to the NCAA Sweet Sixteen.