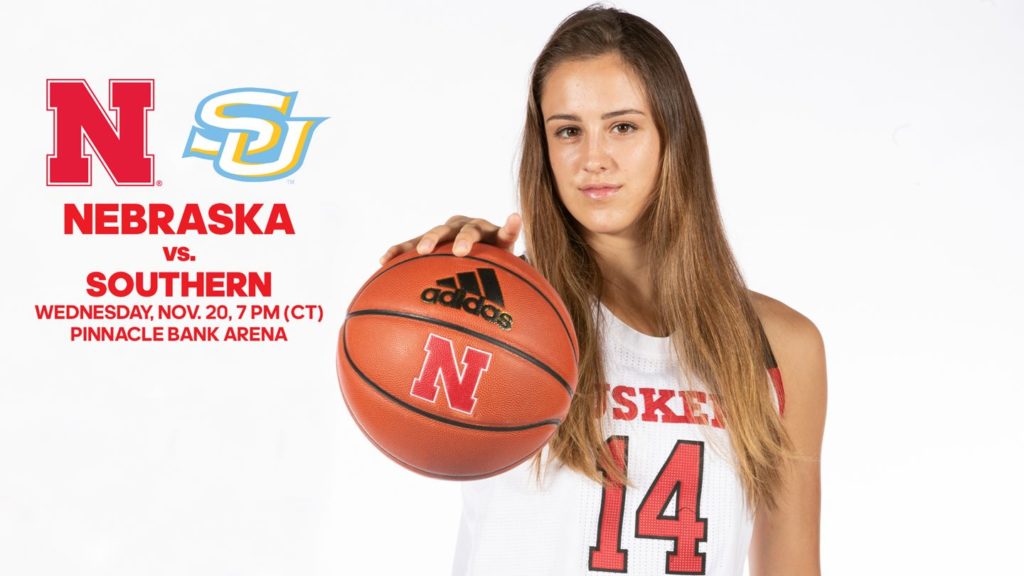 Tip-off between the Huskers (4-0) and the defending Southwestern Athletic Conference champion Jaguars (2-2) is set for 7 p.m., with tickets on sale now through the Nebraska Athletic Ticket Office at Huskers.com.

Wednesday night’s game includes a Veterans Day/Military Salute with two complimentary tickets for all Veterans and Active Military through print-at-home or mobile PDF delivery. The U.S. Marines will also be collecting for their Toys 4 Tots drive, beginning when the gates open 90 minutes prior to tip-off, and concluding at the start of the game. Marines will collect new, unwrapped toys or cash donations inside each main entrance at Pinnacle Bank Arena.

Live radio coverage (beginning at 6:45 p.m.) can be heard in Lincoln on B107.3 FM and in Omaha on CD 105.9 FM. Stations across the state will also carry the broadcast on the Learfield-IMG College Husker Sports Network. Free live audio can be found at Huskers.com and the Huskers App.

A live video stream will be provided by BTN+ as part of Nebraska’s BTN Student U telecasts.

Nebraska is coming off a 63-49 win over SIUE in Lincoln on Sunday. Senior wing Nicea Eliely notched her second straight double-double with 13 points and 10 rebounds to go along with game highs of four steals and two blocks. Eliely is averaging 9.8 points and 7.8 rebounds.

Leigha Brown recorded double-figure points for the fourth straight game with 12 points against the Cougars. The 6-1 sophomore from Auburn, Ind., is averaging a team-best 15.5 points while adding 4.3 rebounds and 2.0 assists. She is the only Husker to score in double digits in all four games.

Ashtyn Veerbeek continued her strong play as a starter with 10 points and six boards in the win over SIUE. The 6-2 sophomore is averaging 10.5 points and 5.8 rebounds per game.

Sophomore guard Sam Haiby ranks second among the Huskers with 13.0 points per game, including a career-high 28 in a win at Missouri (Nov. 10).

Senior guard Hannah Whitish needs just two points to become the 33rd Husker to score 1,000 points in a career. Whitish had eight points and a career-high nine rebounds to go along with five assists in Sunday’s win over SIUE. Whitish is just 22 assists away from becoming the eighth Husker in history to dish out 400 assists.

Husker Nuggets
• Nebraska will try to open the season 5-0 for the first time under Coach Amy Williams in her fourth season at Nebraska. The last Husker team to open 5-0 was the 2014-15 Nebraska team that advanced to the NCAA Tournament after opening the year 7-0.
• Through four games, Nebraska is allowing an average of 58.8 points per game while holding opponents to 31.7 percent shooting from the field and 21.5 percent success from three-point range.
• Last season, Nebraska allowed an average of 70.1 points per game, while opponents shot 41.1 percent from the field and 33.4 percent from long range.
• Nebraska has held three opponents to 55 points or less in four games this season. Last year, NU held only two foes (Radford-39, Kansas-52) to 55 or less.
• Nebraska’s bench has outscored the opposing bench in all four games this season. The Huskers have outscored the opponent bench in 32 of the last 34 games.

Scouting The Southern Jaguars
• Southern University comes to Lincoln with a 2-2 record after a narrow 69-63 loss at Wichita State on Sunday afternoon. The Jaguars own wins over Wiley and Tougaloo, and a loss at Iowa State to open the season at Hilton Coliseum in Ames on Nov. 7.
• The defending Southwestern Athletic Conference champions, Southern went 20-13 overall and 14-4 in the SWAC last season to advance to the first round of the NCAA Tournament to play Mississippi State. Southern’s losses last year included road games at Baylor, Kentucky, Arizona State, Texas Tech, TCU and Michigan.
• Southern, which is the preseason pick to win the SWAC, returns three starters and seven letterwinners from last year’s squad.
• Carlos Funchess is in his second season as the head coach of the Jaguars. A long-time assistant under Sandy Pugh at Southern U before taking the top job at the Baton Rouge, La., school, Funchess was not only the 2019 SWAC Coach of the Year, he also claimed the 2019 Spalding Maggie Dixon Rookie Coach-of-the-Year award from the WBCA.
• An outstanding college player, Funchess was the winner of the ESPN College Slam Dunk Contest in 1991 following his career at Northeast Louisiana (now University of Louisiana Monroe). He was the Southland Conference Co-Player of the Year in 1991.
• Brittany Rose has been a starter for the Jaguars early this season. The 5-9 senior guard from Jackson, Miss., is averaging 14.5 points, 3.0 assists and 2.3 steals per game. She has scored in double figures in all four games, including a season-high 21 points on 8-of-10 shooting in just 16 minutes in the win over Tougaloo (Nov. 14). In her first season at Southern, Rose averaged 7.4 points while primarily coming off the bench. She ranked second among the Jags a year ago with 38 threes. The transfer played at the same junior college (Copiah-Lincoln CC) as Southern Head Coach Carlos Funchess.
• Alyric Scott, a 5-10 junior guard, returns to the Southern starting five after averaging 9.0 points and a team-best 6.0 rebounds a year ago. She also ranked fourth among the Jags with 21 made three-pointers. Scott, who was a preseason first-team All-SWAC selection, is averaging 9.3 points and 3.3 rebounds through four games this season. As a high school player in Richton, Miss., Scott scored 3,000 career points.
• Another returning starter in the backcourt, Jaden Towner is averaging 4.5 points and 3.8 rebounds through four games this season. The 5-10 Towner started 19 games last season and averaged 6.2 points and 2.7 boards per contest while ranking third on the team with 22 three-pointers made.
• Caitlin Davis, a 5-6 junior guard has stepped into the lineup in place of graduated senior star Skylar O’Bear (9.2 ppg, 2.9 rpg). Davis, who spent her first two seasons as a starting guard at McNeese State before sitting out as a transfer last season at Southern, is averaging 4.3 points and 1.3 rebounds through four games. As a sophomore at McNeese State in 2017-18, Davis was the team MVP, averaging 12.2 points and 5.8 assists. She averaged 8.9 points and 3.3 assists as a true freshman for the Cowgirls.
• Raven White (6.0 ppg, 4.3 rpg), a 6-1 freshman forward from Fort Lauderdale, Fla., gives the Jaguars talent and size inside as a starter. She was a member of the South Florida Sun’s Fab Five at Dillard High School the last two years, averaging a double-double both seasons. She is the daughter of former Michigan State and eight-year NFL running back Lorenzo White (Houston Oilers, 7 seasons, Cleveland Browns, 1). Lorenzo White, who was also a graduate of Dillard High School, spent two seasons in the backfield with former Nebraska Heisman Trophy winner Mike Rozier with the Oilers (1988, 1989).
• Raven White’s high school teammate Genovea Johnson is Southern’s second-leading scorer (9.8 ppg) through four games while coming off the bench. The 5-8 Johnson and White led Dillard High School to a Florida Class 7A state championship together in 2019. Johnson also averaged a double-double (10.9 ppg, 11.2 rpg) last season while adding 4.8 assists per contest.
• Sophomore Amani McWain (6.5 ppg, 2.8 rpg) and junior Nakia Kincey (5.3 ppg, 1.8 rpg, 3.0 apg) have also been reliable contributors off the bench this season, along with sophomore Taneara Moore. A 6-0 forward, Moore started 12 games and averaged 6.2 points and 5.7 rebounds last season.
• Nebraska is 2-0 all-time against Southern, including an 89-38 win at Pinnacle Bank Arena on Nov. 23, 2015. The Jaguars were the fourth opposing women’s basketball team in history to face the Huskers at Pinnacle Bank Arena, as Nebraska notched an 87-64 win over the Jags on Nov. 24, 2013. Southern star Kendra Coleman scored 30 points in that game, while Nebraska All-American Jordan Hooper had 23 points and Emily Cady contributed 18 points and 14 rebounds.

Nebraska Streaks
• Kate Cain owns Nebraska’s longest streak of consecutive starts (65).
• Nicea Eliely owns Nebraska’s second-longest streak of starts (60).
• Eliely was the only Husker to score in all 30 games last season, and the only Husker to score in all of Nebraska’s games against Big Ten Conference foes. She has scored in 38 consecutive games overall. She did not score in a win over Penn State on Feb. 22, 2018, the only time in the past three seasons (including 2019-20, 60 games) that Eliely was shut out.
• Leigha Brown has scored in double figures in all four games to open the season. She has scored in double figures in five consecutive games overall – the longest active streak by a Husker.
• Nebraska’s current four-game winning streak is its longest since a pair of five-game winning streaks in 2017-18. The Huskers have not had a six-game winning streak since 2015-16 (Jan. 10-27).
• Nebraska will be shooting to open the season with five straight wins for the first time since 2014-15, when the Huskers opened the season 7-0.
• The Huskers have knocked down at least one three in 346 straight games dating back to a loss at UTEP on Dec. 20, 2008. Nebraska has hit at least two three-pointers in 225 consecutive games.