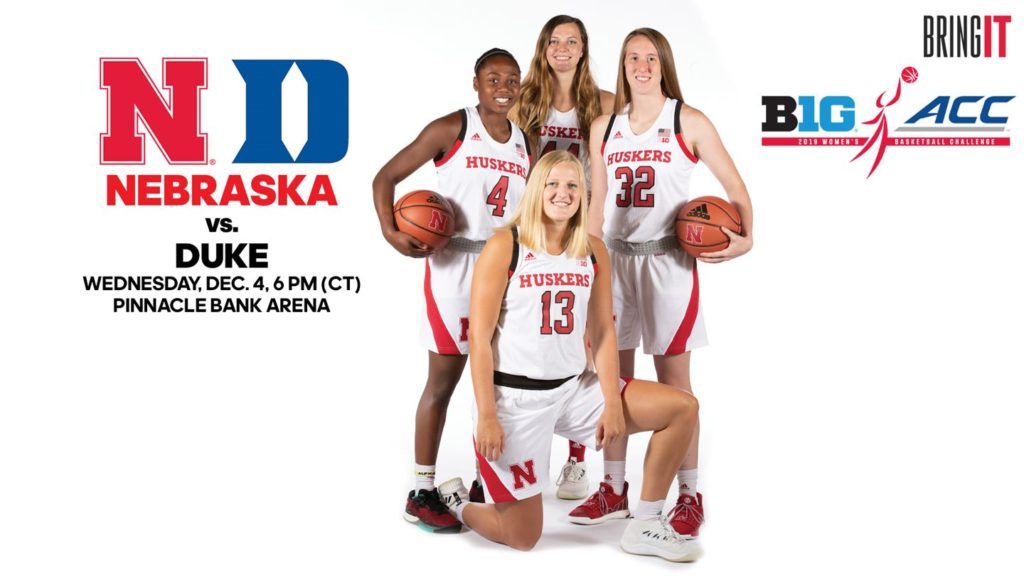 The Nebraska women’s basketball team returns home to play host to Duke in the Big Ten/ACC Challenge on Wednesday night. Tip-off between the Huskers (7-1) and Blue Devils (6-2) is set for 6 p.m. (CT) at Pinnacle Bank Arena, with tickets available now through the Nebraska Athletic Ticket Office at Huskers.com.

Live television coverage will be provided by the Big Ten Network with Larry Punteney and Brenda VanLengen on the call.

Live radio coverage for Wednesday’s game with Duke can be heard on B107.3 FM in Lincoln and CD 105.9 FM in Omaha beginning at 5:45 p.m. (CT). Stations across the state will also carry the broadcast on the Learfield-IMG College Husker Sports Network. Free live audio can be found at Huskers.com and the Huskers App.

Nebraska is coming off a pair of double-digit wins over USC and Sacred Heart at the South Point Shootout in Las Vegas over the Thanksgiving weekend.

Over eight games to open the season, Nebraska has held six opponents to 55 points or less. Last season, the Huskers held just two opponents to 55 or less the entire season (30 games).

Brown leads Nebraska in scoring (14.3 ppg) producing double figures in each of NU’s first seven games this season. Haiby (10.4 ppg) owns the Huskers’ biggest scoring effort of the season (28 at Missouri) and Veerbeek ranks third on the team in scoring (9.0 ppg) while leading the Big Red in rebounding (6.5 rpg).

Scouting Duke
• Duke comes to Lincoln riding a four-game winning streak to improve to 6-2 overall on the young season.
• All six of Duke’s wins this season have been by double digits, including weekend wins over Davidson (82-52) and Penn (66-50) in Durham.
• Duke’s losses have come at the hands of No. 6 Texas A&M (79-58) on the road (Nov. 10) and to Northwestern at Cameron Indoor Stadium (63-42, Nov. 17).
• The Blue Devils are led by Ann Meyers Drysdale Award candidate Haley Gorecki, who is averaging 18.3 points, 6.5 rebounds, 4.3 assists and 1.6 steals per game. The 6-0 guard has also knocked down a team-best 17 threes on the season and is shooting nearly 90 percent from the free throw line. Gorecki, who owns three 20-plus scoring efforts this season including a season-high 30 in a win over Idaho State, needs 24 points to join Duke’s 1,000-point club. The Parade High School All-American was the Illinois Player of the Year in 2015.
• Leaonna Odom, a 6-2 senior forward, has added 14.5 points and 5.8 rebounds. Odom, who owns 1,104 points and 601 rebounds in her career, is in her fourth year as a starter for the Blue Devils and is a Katrina McClain Award candidate this season. Odom is coming off a 23-point, 16-rebound performance in Friday’s win over Penn.
• Sophomore Miela Goodchild gives Duke four starters averaging in double figures with 11.3 points per game. Goodchild, a 5-10 guard from Brisbane, Queensland, Australia, also leads Duke with 2.1 steals per game, while adding 3.9 rebounds. She was a teammate of Nebraska freshman Isabelle Bourne on Australia’s silver medal winning team at the 2019 FIBA U19 World Cup in Bangkok, Thailand this summer. Last season, Goodchild started 22 games for the Blue Devils and averaged 10.9 points per game while knocking down 73 threes (.445). She also hit 87 percent of her free throws.
• Fellow sophomore Onome Akinbode-James also returns to the Duke starting five. The 6-3 forward/center is averaging 6.3 points and 5.1 rebounds, after averaging 4.0 points and 5.4 boards while making 22 starts a year ago. Akinbode-James is a native of Abeokuta, Nigeria. She had 12 points and 12 rebounds to go along with three blocks off the bench in last Wednesday’s win over Davidson, before moving back into the starting lineup for the win over Penn.
• Junior Jade Williams rounds out Duke’s probable starting five by averaging 7.4 points and 4.4 rebounds per game. The 6-5 forward/center from Texas was a McDonald’s All-American and ranked among the top 25 prospects in the nation by every recruiting service coming out of The Colony High School. A Lisa Leslie Award candidate, she scored a season-high 12 points, including two threes, against Davidson. She opened the year with 12 points and two threes in a win over High Point.
• A trio of freshmen have provided Duke with talented depth this season. Jada Claude, a 6-0 wing from Fayetteville, Ga., has split time in the starting lineup with Onome Akinbode-James. Claude has made three starts and is averaging 4.0 points and 5.0 rebounds.
• Azana Baines, a 6-1 freshman forward, was a top-100 recruit nationally and is averaging 6.9 points and 4.6 rebounds off the bench early in her career.
• Jaida Patrick, a 5-10 wing, has managed 2.0 points and 1.3 rebounds. She was a top-100 prospect out of Saddle River Day School.
• Graduate student Kyra Lambert is one of seven Blue Devils to play in all eight games this season. The 2015 WBCA and McDonald’s High School All-American out of Cibolo, Texas, was a top-10 high school recruit but suffered a torn ACL in her left knee during the 2017 NCAA Tournament. That injury kept her out for the entire 2017-18 season. She then suffered another torn ACL during preseason in 2018-19, undergoing surgery in November of 2018 before missing another entire season. She is averaging 2.8 points and 1.9 rebounds in 13 minutes per game this year. She started 56 games in her first two seasons at Duke.
• Another top-25 national recruit, Mikayla Boykin has not played this season and has missed a majority of her first two college seasons with major knee injuries. As a true freshman in 2017-18, Boykin started eight times in Duke’s first 10 games before tearing the ACL in her left knee on Dec. 10, 2017. She returned to play eight games last season, after missing the first seven games, only to reinjure her knee against Miami (Jan. 17, 2019).
• As a team, Duke is averaging 72.8 points per game while allowing 62.1 points per contest. The Blue Devils have hit 43.3 percent of their field goals and 35 percent (42-120) of their threes, while knocking down 71.2 percent of their free throws. They have held opponents to 35.8 percent shooting, including 28.6 percent (64-224) from three. Duke owns a plus 5.4 edge on the glass but a minus-0.5 turnover margin.

Nebraska vs. Duke Series History
• Nebraska and Duke have split the two previous meetings in series history and both involved high level basketball teams.
• In the last meeting between the Big Red and the Blue Devils (also in the Big Ten/ACC Challenge), the No. 12 Huskers defeated No. 9 Duke 60-54 at Pinnacle Bank Arena on Dec. 3, 2014. All-America point guard Rachel Theriot led Nebraska with a game-high 17 points, while Hailie Sample added 16 points on 6-for-6 shooting from the field. Emily Cady added a double-double with 13 points, 11 rebounds and four assists.
• The 2015 Huskers advanced to the NCAA Tournament, while Duke went to the Sweet Sixteen.
• In the first meeting between the two schools, No. 5 Duke worked its way to a 53-45 win over the No. 24 Huskers in the NCAA Sweet Sixteen in Norfolk, Va., on March 31, 2013. All-American and first-round WNBA draft pick Lindsey Moore led the Huskers with 11 points and six assists in her final game. All-American Jordan Hooper added six points and 11 rebounds before leaving the game midway through the second half with an ankle injury. Duke All-American Elizabeth Williams produced 10 points, nine rebounds and seven blocks, while Alexis Jones had 14 points and nine rebounds. Tricia Liston led Duke with 17 points while contributing eight boards. In a defensive struggle, the two teams went a combined 7-for-40 from three-point range.
• The 2013 Duke team went on to lose to Notre Dame in the Elite Eight.

Nebraska Streaks
• Kate Cain owns Nebraska’s longest streak of consecutive starts (69).
• Nicea Eliely owns Nebraska’s second-longest streak of starts (64).
• Eliely was the only Husker to score in all 30 games last season, and the only Husker to score in all of Nebraska’s games against Big Ten Conference foes. She has scored in 42 consecutive games overall. She did not score in a win over Penn State on Feb. 22, 2018, the only time in the past three seasons (including 2019-20, 69 games) that Eliely was shut out.
• Leigha Brown had her streak of eight straight games scoring in double figures snapped when she managed six points in a win over Sacred Heart (Nov. 30).
• The Huskers have knocked down at least one three in 350 straight games dating back to a loss at UTEP on Dec. 20, 2008. Nebraska has hit at least two three-pointers in 229 consecutive games.

Husker Nuggets
• Nebraska Coach Amy Williams shoots for her 50th win at the helm of the Huskers.
• Senior guard Hannah Whitish is set to appear in her 100th game in a Husker uniform.
• Through eight games, Nebraska is allowing an average of 57.0 points per game, after allowing 70.1 points per game last season. Nebraska’s 2018 NCAA Tournament team surrendered 63.6 points per game.
• Opponents are shooting just 31.9 percent from the field and 26.5 percent from three-point range early this season against the Huskers. Last year, Husker foes hit 41.1 percent of their shots, including 33.4 percent from long range. In 2017-18, Nebraska led the Big Ten in field goal percentage defense (.371) and three-point field goal percentage defense (.299).
• Nebraska has held six opponents to 55 points or less through eight games this season. Last year, NU held only two foes (Radford-39, Kansas-52) to 55 or less.
• In 2017-18, Nebraska held 11 of 32 opponents to 55 points or less.
• Nebraska’s bench has outscored the opposing bench in all eight games this season. The Huskers have outscored the opponent bench in 36 of the last 38 games.
• The Husker bench has outscored the opponent bench by double digits 27 times in the last 38 games, including a 30-1 edge in a loss to 2019 NCAA Elite Eight qualifier Iowa (Feb. 25, 2019).