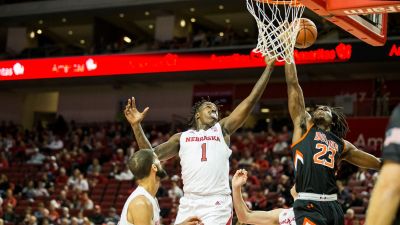 Lincoln – A potential old conference matchup could be on the horizon, as ESPN announced the field for the 2020 Myrtle Beach Invitational Thursday morning.

In all, four of the eight teams reached postseason play last season, including Utah State, which is ranked 15th nationally and coached by former NU assistant Craig Smith. Other postseason qualifiers besides the Huskers include Dayton and Loyola (Chicago), who NU could also face next week in the Cayman Islands Classic.

The Huskers and Missouri have a long history that dates back to 1908. The teams have squared off 219 times over the years, but have not met since the Huskers joined the Big Ten in 2011. NU topped Dayton in the 2016 Wooden Legacy, while a potential matchup with Penn could be the first since the Quakers upset the Huskers in the 1994 NCAA Tournament.

The appearances by Charlotte and Pittsburgh mark the third straight year schools from Conference USA and the ACC have competed in the Myrtle Beach Invitational. The Big Ten, Ivy League and Mountain West will be represented in the event for the first time with Nebraska, Penn and Utah State participating next year. The Atlantic 10, Missouri Valley and SEC will have a school competing for the second time.

UCF captured the inaugural Myrtle Beach Invitational title in 2018 by defeating Western Kentucky 78-62 in the championship game. The Knights eventually reached the second round of the 2019 NCAA Tournament before falling 77-76 to Duke.

For more information on the Myrtle Beach Invitational, visit myrtlebeachinvite.com