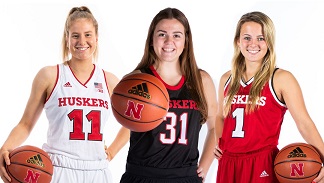 The Nebraska women’s basketball team will welcome three freshmen to its 2020-21 roster with the additions of Ruby Porter, Annika Stewart and Whitney Brown, Coach Amy Williams announced to open the fall 2019 signing period on Wednesday, Nov. 13.

“It’s a very exciting day for our program, as we add a recruiting class that fits our needs on the court and our Husker family as a whole,” Williams said. “We are excited about the potential this group brings, and we are looking forward to helping them build a great list of accomplishments in the future here at Nebraska.”

Ruby Porter
5-10, Guard
Adelaide Australia (Sturt Sabres/Adelaide Lightning)
Ruby Porter, a 5-10 guard from Adelaide, Australia, became the first signee across any of Nebraska’s sports during the signing period. She completed her paperwork shortly after 7 a.m. in her local time in Australia, which was late-afternoon Tuesday in Nebraska.

One of the most talented players in Australia’s class of 2020, Porter was a member of the Australian U18 3×3 National Team that competed in the Youth Olympics in Argentina in October 2018, before winning the Asia Cup in the summer of 2019. She also competed at the 2018 World Championships in Minsk, Belarus as part of the U17 Australian National Team (Sapphires).

In April of 2019, she participated in “Next Generation Saturday” at the NCAA Women’s Final Four in Tampa, before competing in the Australian Team Camp alongside current Husker freshman Isabelle Bourne for a spot on the U19 team at the FIBA Under-19 World Cup.

As a member of the Sturt Sabres in Australia’s Premier League, Porter averaged 15.9 points per game at the U20 national championships in February of 2019. In April of 2018, Porter averaged 16.2 points, 5.6 rebounds and 3.6 steals in helping South Australia to a silver medal at the U18 National Championships.

Porter said she chose Nebraska over LSU because of the Husker program’s family atmosphere.

“The people at Nebraska made it feel like one big family and a place where I can develop best to achieve my goals in basketball and in life.”

Annika Stewart
6-3, Forward
Minneapolis, Minnesota (Wayzata)
Annika (pronounced AH-nick-ah) Stewart, a 6-3 forward out of Wayzata High School in Plymouth, Minn., was the first commitment in Nebraska’s signing class, making her intentions known on July 31. Stewart is expected to provide the Huskers with a versatile forward who brings a strong post game and the ability to shoot the three. Stewart averaged 12.2 points and 7.0 rebounds as a junior for 26-3 Wayzata, while earning All-Lake Conference and All-Metro honors. She produced 10.0 points and 6.0 rebounds per game as a sophomore for the 25-3 Trojans to earn All-Lake Conference honors in her first season at the school. Wayzata was the No. 2 ranked team in Class 4A in Minnesota in both 2018 and 2019. She played her eighth grade and freshman seasons in North Dakota at Minot’s Bishop Ryan High School, before her family moved to Minneapolis.

After coming off the bench as an eighth grader, Stewart averaged 15.2 points and 7.1 rebounds as a freshman for Bishop Ryan. She earned all-region and all-conference honors while helping Bishop Ryan to a 20-5 record on the season. She has totaled 1,095 points, 600 rebounds, 106 blocks and 80 three-pointers in her four high school seasons combined entering her senior year in 2019-20.

Stewart chose Nebraska over Minnesota and Iowa because of the overall environment of the program.

“I really like the coaching staff and the family atmosphere,” Stewart said. “I believe it is a special place with great support to thrive as a student-athlete. I’m excited to be a Husker!”

Whitney Brown
5-8, Guard
Grand Island, Nebraska (Northwest)
Whitney Brown averaged 16.9 points, 3.3 rebounds, 2.7 assists and 2.9 steals per game in leading Grand Island Northwest to the 2019 Nebraska Class B State Championship. The 5-8 guard averaged 21.0 points per game in three state tournament wins for the Vikings, including a 23-point effort in the Class B state championship game against Crete. Her performance as a junior earned her a spot on the Omaha World-Herald’s All-Nebraska First Team, while adding honors on the Lincoln Journal Star’s Super-State Second Team in 2019. She was a first-team Class B All-State selection by both papers. She was the captain of the Grand Island Independent’s All-Heartland Super Squad for Coach Russ Moerer. She played summer club basketball for the Cornhusker Shooting Stars Bison Elite.

“It has always been my dream since I was a little kid to be a Husker, so when I was given the opportunity it was my dream come true,” Brown said. “It will be an honor to represent my hometown with “Huskers” written across my chest.”