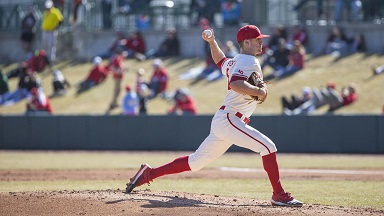 Lincoln, Neb. – Husker pitchers Kyle Perry and Max Schreiber each recorded seven strikeouts to help Nebraska (3-7) to a 5-3 win over Columbia in its 2020 home opener at Hawks Field on Friday afternoon.

The Huskers took a 3-0 lead after three innings before the Lions trimmed the deficit to 3-2 after six innings. NU tacked on a pair of runs in the bottom of the seventh before allowing one in the top of the eighth.

Perry, making his first start and fourth appearance of the season, went 5.0 innings and allowed one run on two hits, while racking up seven strikeouts. Schreiber came out the bullpen for 3.0 innings and gave up two runs (one earned run), while fanning a career-high seven batters. Paul Tillotson earned the save with a scoreless top of the ninth and notched a pair of K’s. NU’s trio of pitchers didn’t allow a walk against Columbia.

Freshman Leighton Banjoff, the reigning Big Ten Freshman of the Week, continued where he left off on Sunday, smacking a solo home run in his first at-bat on Friday. Banjoff’s bomb in the bottom of the second was his third home run in a span of six at-bats, dating back to NU’s win over Arizona State last weekend.

In the bottom of the third, NU loaded the bases with two outs, as Cam Chick doubled, Spencer Schwellenbach reached on a hit-by-pitch and Aaron Palensky drew a walk. Luke Roskam drove in two runs with an RBI single to give NU a 3-0 lead.

In the bottom of the seventh, Joe Acker reached on a leadoff single before advancing to third on Jaxon Hallmark’s single that led to an error by the Lion left fielder. Back-to-back RBI groundouts helped NU extend its lead to 5-2.

The Lions scored one run in the top of the eighth and had runners on second and third with one out before Schreiber notched back-to-back strikeouts to leave the runners stranded.

The Huskers and Lions resume their four-game series with a doubleheader on Saturday, starting at 12:05 p.m. (CT)