Texas Tech shot 54.3 percent from the field and was led by Kyler Edwards, who scored 22 points on 6-of-9 shooting. TTU led by 10 points with under 10 minutes left until the Red Raiders went on a decisive 14-0 run to put the game out of reach.

Poor shooting plagued the Cyclones in their attempt for an upset, making just 35.7 percent of their shots from the field and 3-of-22 shots from downtown. ISU did have some positives in the game and was able to keep it close for the majority of the afternoon thanks to forcing 16 turnovers and holding the advantage on glass at 31-23. ISU had 15 offensive boards.

Tyrese Haliburton paced the Cyclones with 13 points and Michael Jacobson had 10 points.

How It Happened
A sluggish start by the Cyclones put them in a hole at the beginning of the contest. After seven minutes, Iowa State had seven turnovers, made just 1-of-10 shots and was down 11-2.

Iowa State was able to hang around thanks to its defense. The Cyclones forced 10 turnovers in the first 11 minutes of the game, trimming the lead to 15-13 with 8:22 left in the half. Rasir Bolton and Haliburton combined for nine points in an 11-4 run to keep it close.

The first half ended with Texas Tech owning a 27-21 lead. The Cyclones likely went into the break breathing a sigh of relief for being down by only six points despite shooting 31.3 percent from the floor and missing all 13 3-point attempts. Nine offensive boards and 13 TTU turnovers were two big reasons it was less than a double-digit lead for the Red Raiders.

Jacobson helped the Cyclones close the gap to 29-27 with a pair of buckets to start the second half. However, TTU then mounted a 12-2 run to move ahead 41-29. Haliburton finally made ISU’s first trey to cut the Red Raider lead to 43-34 with 12:07 left in the game. ISU had missed its first 15 shots from downtown until Haliburton’s triple.

TTU’s 14-0 run with under nine minutes remaining ended ISU’s chance for a comeback.

Players of Note
Tyrese Haliburton led the Cyclones with 13 points and kept ISU in the game in the opening period with eight points. Haliburton has scored in double figures in 13 of 16 games and has made a 3-pointer in 13-straight games.

Michael Jacobson tallied his fifth double-figure scoring game with 10 points. He also grabbed four rebounds, all on the offensive glass.

Team Notes
-ISU is 1-7 when trailing at halftime.
-ISU is 0-9 when outshot from the field.
-ISU is 2-8 when allowing 70 or more points.
-ISU committed a season-high 20 turnovers.
-ISU is 0-2 when committing more turnovers than its opponent. 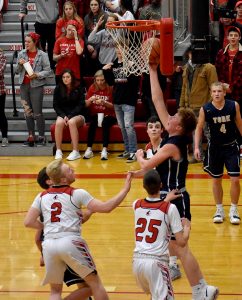