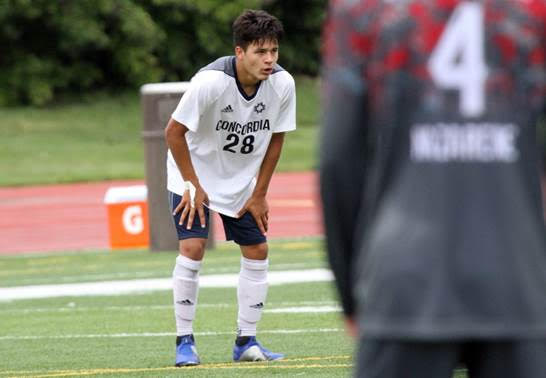 SEWARD, Neb. – For his role in a 2-0 week for the Concordia University men’s soccer program, freshman Moises Jacobo has been named the GPAC/Hauff Mid-America Sports Men’s Soccer Offensive Player of the Week. The announcement on Tuesday (Sept. 17) means that the Bulldogs have now had two GPAC weekly award winners already this season. Freshman goalkeeper Eduardo Alba garnered the GPAC Defensive Player of the Week honor on Sept. 3.

Jacobo was one of the stars in a 12-goal Concordia outburst last week as it topped McPherson College (Kan.), 3-2 in overtime, and Presentation, 9-0. In the victory over McPherson, Jacobo assisted the golden goal in overtime. Three days later, the native of Grand Island, Neb., notched two goals and two assists in the road blowout of the Saints. Jacobo leads the team with four goals this season and shares a team high with three assists.

Jacobo and his teammates have roared to a 5-0 start, marking the best five-game run to begin a season during head coach Jason Weides’ 12 years as head coach. The Bulldogs will attempt to keep their unblemished mark intact tonight (Sept. 17) when they take on Bellevue University (4-5) at 7:30 p.m. at Tranquility Park in Omaha, Neb.