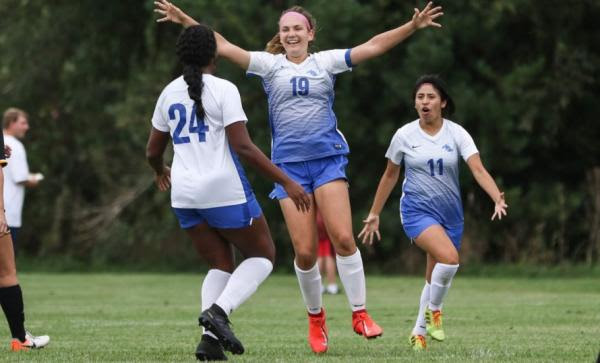 YORK – Amber Jimenez (JR/Gilbert, Ariz) had just one shot on goal on Saturday, but she made sure it was a good one as she sent the deflection off of a Braves’ defender into the back of the net to give York the 1-0 lead in the 24th minute. Jimenez then assisted the game-winner by Sarah Tolentino (FR/San Diego, Calif.) 15 minutes into the second half as the Panthers survived the pressure from Ottawa to win the contest 2-1.

Breanna Bembenek (JR/New Lenox, Ill) kept pressure offensively for York as she had four shots, three of which were on frame. Tolentino added three as well for the Panthers.

York was outshot 16-12 on the day, but the resilience and fight from the backline on defense helped the Panthers get their first KCAC win of the year. Cassandra Martinez (SR/Madera, Calif) picked up the win in goal as she was credited with nine saves. Elizabeth Ryan (JR/Mountain Home, Idaho) and Logan Dye (JR/Wylie, Texas) were solid in the back keeping the Braves’ players off balance and not allowing them to create threatening shots.

York improves to 2-6 on the season and will host KCAC opponent Avila University on Wednesday afternoon.