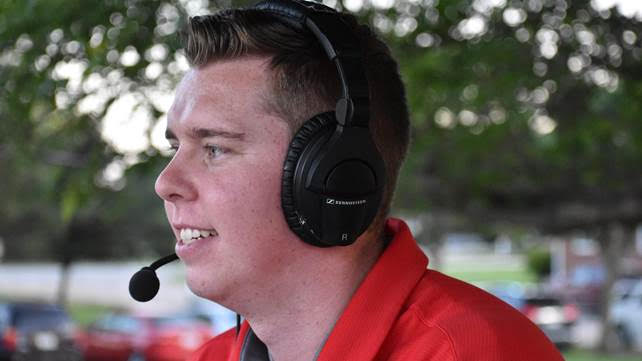 SEWARD, Neb. – Beginning with the 2020-21 academic year, Evan Jones will take over the role of play-by-play voice for Concordia University football and men’s and women’s basketball games. Jones has served as Sports and News Director at Max Country and KOOL Radio since Aug. 1, 2019. This will mark the sixth year of the partnership between Concordia Athletics and Max Country radio.

Wrote Jones in a statement, “It’s always been a goal of mine to broadcast collegiate athletics, and what an outstanding program to be the voice of that has had so much success throughout the years. My faith, family, friends and colleagues have been so instrumental in helping and guiding me so far in my career path. My wife, Mackenzie, has been an amazing support system also. She was willing to move to York so I could take the Sports and News Director position at Max Country and KOOL Radio. What a blessing it has been to have so many support me and prepare me for this opportunity. Having the chance to broadcast a handful of games this past season at Concordia, I had a great feeling while being around the fans, staff and athletes. Everyone has been so kind and welcoming to me so I look forward to building those relationships as I begin this new role. There will be big shoes to fill with Tyler stepping away as he did a top-notch job while broadcasting Bulldog events, but I am ready to provide a seamless transition as he has helped prepare me for this position.”

A native of Cambridge, Neb., Jones has hit the ground running in his broadcast career that has been heavy on high school coverage thus far. Jones filled in for select Concordia broadcasts last season and called the first national tournament victory in the history of the Bulldog volleyball program. While attending the University of Nebraska-Kearney, Jones simultaneously worked at KRVN (Max Country sister station) out of Lexington, Neb.

Jones graduated from UNK with degrees in Sports Communication and Sports Management. After suffering an injury as a senior in high school, Jones began calling football games using a blue-tooth headset and iPad. This experience convinced Jones to proceed in his broadcasting endeavors. Jones describes his broadcast style as a “calming energy and conversational.” Added Jones, “I am very even-keeled, but when the big play happens you’ll know, and I like for the listeners to feel like they can chat with me after the game about anything.”

Meanwhile, Cavalli will turn his focus to his role as Program Director at KRVN. Cavalli had this to say about Jones, “Evan is a very good listener. He’s always looking to improve. I think that’s a great thing for a young broadcaster. Evan has been with this company before he even graduated. He’s been doing ballgames at the high school level and did a terrific job filling in for me a couple times this last year. He wants to know every detail about each player. He’ll jump in very nicely. I think Concordia fans will love his broadcasting and it will be a seamless transition.”

Jones will work with a color commentator to be determined for football broadcasts this fall. After three years working with Cavalli, Roger Fitzke will step aside from radio duties. His son Brady is a current member of the Concordia football team. When available, Director of Athletics Devin Smith has filled the color commentator role for men’s and women’s basketball.