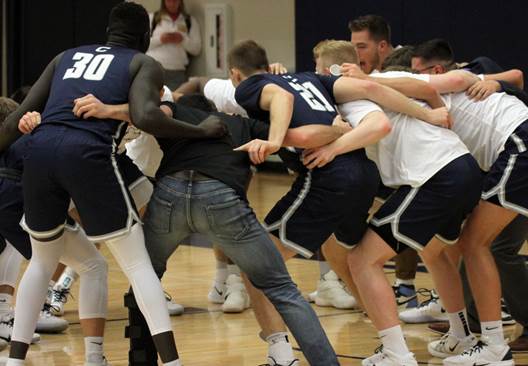 SEWARD, Neb. – This one came with perhaps a bit more late game drama than the Concordia University men’s basketball team would have preferred, but it got the job done. Carter Kent’s darting layup in the final few seconds proved to be the winning basket in a pulse-pounding 66-65 Bulldog triumph over ninth-ranked (NAIA Division I) Benedictine College (Kan.) in Saturday (Nov. 2)’s final game of the 20th annual Cattle Classic.

Seventh-year head coach Ben Limback’s squad has met every challenge to date and now sits at 4-0. The latest victory stands out as the most impressive considering the Ravens of the Heart of America Athletic Conference won 31 games last season.

“This is a gritty, gutsy group,” Limback said. “That team we played today was really, really good. I can see why they had such a great year last year – well-coached and they have guys that don’t like to lose. We knew in the second half they were going to come back and make a run at some point. We just wanted to match it. Shots won’t always fall, but if we can play defense and get to the free throw line, then you’re going to be in a lot of games.”

Who knows exactly where this journey will ultimately lead, but Concordia is showing that it’s clearly an improved team. It led virtually the entire game on Saturday, even mounting an advantage as large as 16 points in the opening half. Eventually Colby Nickels (game high 20 points) and Benedictine chiseled their way back into the contest.

Raven reserve Chris Jackson made his only six points of the night count. He buried back-to-back 3-pointers to edge Benedictine in front, 65-64, with 13.8 seconds left in the game. That’s when Limback drew up a play that the Bulldogs executed to perfection. Kent curled around two screens, cut to the basket and finished off a pretty feed from Tanner Shuck. The Ravens did not even get up a shot on the last possession as the buzzer sounded.

“I think it was just staying mentally tough throughout the game,” said senior Brevin Sloup. “We knew they’re obviously a really good team. We knew they would claw back. We just stuck together and played really hard.”

Sloup’s playmaking exploits on the offensive end always come in handy. Limback also lauded his defensive work afterwards. Sloup netted 19 points while Kent poured in 18, Sam Scarpelli had 10 and Shuck pitched in nine. Concordia shot only 39.6 percent from the floor, but it made 18-of-21 free throws and held Benedictine to 36.7 percent shooting. Four of the team’s five starters played 36 or more minutes.

“We have a lot of room for improvement and they know that,” Limback said. “We didn’t rebound down the stretch like we needed to, but I love the gutsy plays. Brevin made some great defensive plays and Sammy (Adjei) did some great screening action that we don’t always see. All around it was a great group effort.”

The Bulldogs will have nine days in a row without a game before resuming action on Tuesday, Nov. 12 when conference play opens up. Midland (2-1) will be at Walz Arena on that date for an 8 p.m. CT contest. In last season’s meetings, the home team won in both instances.