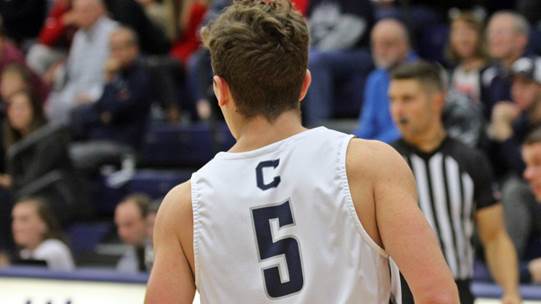 ORANGE CITY, Iowa – Stunningly dominant are the words that sum up the performance put together by the Concordia University men’s basketball team on Thursday (Jan. 2). Carter Kent scorched the nets at the Bultman Center with 25 points and the Bulldogs picked up their first road win over a ranked GPAC opponent since February 2017. Concordia rocked host and 19th-ranked Northwestern, 88-65.

Perhaps head coach Ben Limback’s squad is just hitting its stride with the calendar flipped to 2020. The Bulldogs have won three in a row to move to 10-5 overall and to 3-4 in conference play.

“Our goal is to win as many possessions as possible,” Limback said. “Carter got off to a great start and I think our guys really fed off of that. Gage (Smith) had a great performance. Defensively we did a nice job holding down their top two scorers. We knew if we rebounded and kept them off the free throw line we would have a chance.

“We did the little things. Even when we’re not shooting it well we’re fighting defensively. This was a great team game.”

Concordia has shown flashes of brilliance, as evidenced by it taking a lead into the final minute of the game on Dec. 11 at No. 1 Morningside. This time the Bulldogs finished while being powered by a trio of rising sophomores in Kent, Smith and Justin Wiersema. Kent and AJ Watson splashed home back-to-back treys and Concordia led 34-22 at the 7:15 mark of the first half. It maintained a double-digit lead the entire rest of the way.

The Bulldogs roared to begin the ‘20s with its 3-point shooting (14-for-34), impressive ball security (only five turnovers) and solid work on the defensive end. The Red Raiders (13-4, 5-2 GPAC) shot 43.6 percent while suffering their first home loss of the campaign. Northwestern had won five-straight home games versus Concordia.

“He really stretches the defense,” Limback said of Smith. “He can guard inside and he’s playing with a lot of confidence. He brings versatility because he can guard big guys. He gives us a different look and is very gifted.”

The star for the Red Raiders has been Trent Hilbrands. He struggled to get going on Thursday. His seven points (3-for-9 from the field) were well below his season average of 18.1 per game. Jay Small topped Northwestern with 17 points. The Red Raiders went just 9-for-17 from the free throw line.

Contrast that with 20-for-29 free throw shooting by the Bulldogs. Wiersema posted 12 points, five assists and three rebounds as the third Concordia player in double figures. Tanner Shuck added nine points and six rebounds while Watson contributed nine points off the bench. Rebounding was even at 41 boards per team.

The most recent Bulldog victory on the home court of a ranked GPAC foe came on Feb. 12, 2017, when Chandler Folkerts spearheaded a 109-106 overtime win over seventh-ranked Dakota Wesleyan. The conference road slate has been brutal thus far with Concordia having already played at Morningside and No. 23 Mount Marty.

Now the Bulldogs try to keep things rolling when they host Dordt (13-4, 5-3 GPAC) at 4 p.m. on Saturday. The Defenders have won three conference games in a row.