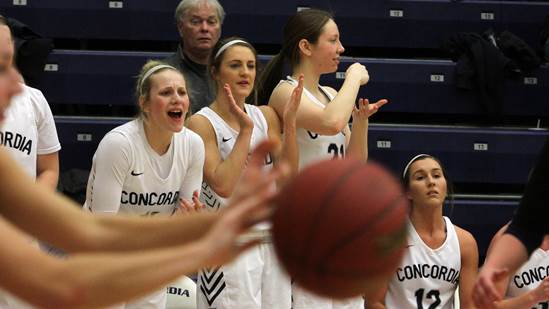 SEWARD, Neb. – Whatever flaws the second-ranked Concordia University women’s basketball team may have shown a week ago were ironed out in the GPAC tournament quarterfinals. While playing the same Midland squad for the second Wednesday in a row, the Bulldogs looked invincible at home once again, winning, 95-46. Concordia nailed 12 treys and forced 34 turnovers in advancing to the conference semifinals.

Fourteenth-year head coach Drew Olson’s program has won 13-straight GPAC tournament home games and is on the cusp of another 30-win season at 29-2 overall. The Bulldogs are in pursuit of a fourth-consecutive GPAC tournament title to equal their string of conference regular-season championships.

“I think there’s a lot of different factors in it,” Olson said of the blowout. “We are just a little bit more confident when we play at home. Watching the tape you could just tell we didn’t play as hard as we needed to at their place. When we play that focused and that hard and that confident at home, we’re a pretty good team.”

It took sophomore Mackenzie Koepke less than three minutes into the third quarter to record a career high scoring total. She made four 3-point shots in the first half alone as the ringleader behind the latest offensive surge. After a couple of road battles last week that took a full four quarters to put in the bag, Concordia returned to its dominant ways. By halftime, the outcome had virtually been decided with the score resting at 54-27.

A week earlier, the Warriors (12-19) shot 48.9 percent from the floor while giving the Bulldogs a tussle (75-68 decision) in Fremont. The well dried up at Walz, where Concordia seems to have a little extra juice. Midland shot only 24.5 percent from the floor on Wednesday. The second half numbers were even more putrid – 13.8 percent (4-for-29).

It all added up to the Warriors suffering the same fate endured by many Walz visitors. All 13 Bulldogs who saw action registered in the scoring column. Koepke’s 19 points (to go along with her five steals) led the way with Grace Barry (15) and Philly Lammers (10 points and seven rebounds) also reaching double figures. Colby Duvel added eight points and four rebounds and the special forces off the bench contributed in a big way with 40 points, including nine from Rylee Pauli and eight from Taryn Schuette.

Koepke is already quite a weapon in the present, but she also showed on Wednesday what the future may look like. She put on a shooting display that included some shake N bake off the dribble.

“I don’t know, honestly,” said Koepke in trying to explain her hot shooting. “My teammates are always so supportive and encouraging. They always know the right thing to say. When you’re feeling good and hitting shots it’s that constant support (that makes the difference) – and they keep feeding me the ball.”

A week ago Midland’s Lexi Kraft made four 3-point field goals and notched 16 points. This time she went just 1-for-7 from the floor and had two points. Not a single Warrior managed more than 10 points. Midland had been playing much better than its record indicated down the stretch of the regular season and even defeated then seventh-ranked Morningside in Sioux City.

In the semifinal round of the conference tournament, the Bulldogs will host 12th-ranked Dordt (24-7, 15-7 GPAC) at 2 p.m. CT on Saturday. Concordia swept the regular-season series from the Defenders, who got past No. 15 Dakota Wesleyan, 75-55, on Wednesday. That result snapped a string of three-straight years that saw the Bulldogs meet up with DWU in the GPAC tournament.

Said Koepke, “Every game from here on out is a big game. It doesn’t matter if we have a bid (to the national tournament locked up). We want to win and we want to prove to people that we’re the best team in the nation.”