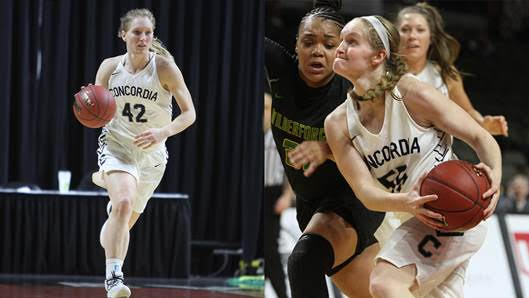 Barry and Lammers were the most high profile players for a 2019-20 squad that went 32-2 overall, swept GPAC regular-season and postseason titles and earned the No. 1 overall seed in the national tournament. Head coach Drew Olson has coached five players who have been named first team All-Americans: Kristen Conahan, Amber Kistler, Lammers, Bailey Morris and Whitney Stichka.

The only real misfortune that occurred during Lammers’ career is that it came to an abrupt end. As a Bulldog, Lammers appeared in 146 games and helped the program to a four-year record of 137-10 during a stretch that also included four GPAC regular-season titles, four GPAC tournament championships and a national title. Individually, Lammers has been honored as a four-time first team All-GPAC performer, a GPAC Player of the Year (2018-19), a GPAC Defensive Player of the Year (2019-20), an NAIA Liston Award winner and a CoSIDA Academic All-American. She concluded her career with school all-time rankings of second in points (2,033), second in blocked shots (181), third in rebounds (1,026) and fourth in steals (357).

After transferring in from the University of Nebraska-Kearney, Barry proved to be the final piece that solved the national championship puzzle for Concordia. The Lincoln East High School graduate has received plenty of attention recently for her mature handling of the cancellation of the national tournament. The 2019 national tournament MVP averaged 13.9 points, 5.8 assists and 3.2 steals per game as a senior and was named the CoSIDA Academic All-American of the Year for NAIA women’s basketball. Including her two seasons at UNK, Barry totaled 1,081 points, 521 assists, 302 rebounds and 291 steals over 126 collegiate games.

Barry and Lammers will graduate and depart from the program, but Olson will return one previous All-American in Taylor Cockerill (2019 honorable mention). Cockerill has been rehabbing from a season-ending injury.

*National player of the year