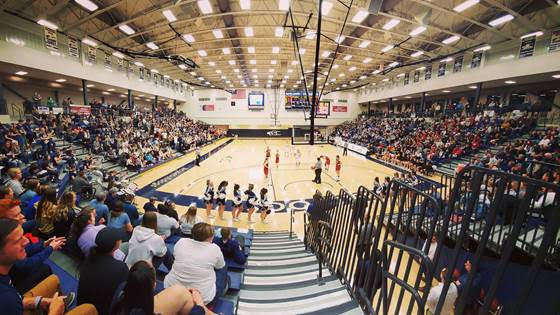 SEWARD, Neb. – Even through its glorious runs throughout the 2010s and beyond, the Concordia University women’s basketball program has never gone undefeated in GPAC regular-season play. So why would it be keen on letting rival Hastings accomplish such a feat? The third-ranked Broncos went only 13-for-61 from the floor in falling for the first time this season. The Bulldogs won a rugged affair, 53-46, on Wednesday (Feb. 12) night inside a packed Walz Arena.

Fourteenth-year head coach Drew Olson’s squad (25-2, 18-1 GPAC) now moves into a tie for first place with Hastings as it aims for a fourth GPAC regular-season title in a row. The unbeaten run is over for the Broncos (26-1, 18-1 GPAC).

“We weren’t at our best. I think a lot of that has to do with Hastings’ pressure getting us out of our offense,” Olson said. “But our kids just have so much toughness and they find a way. They made some big plays when we needed it.”

Walz remains a fortress from which few opponents emerge unscathed. There may have been some battle scars on both sides after this one. It was a game for the tough and the gritty, which describes All-American Philly Lammers. Baskets were hard to come by, but Lammers came up with them when it was critical for the team. Lammers used her physicality to muscle up eight crucial points in the fourth quarter.

With Concordia clinging to a 46-41 lead in the final three minutes, Lammers skied over a Bronco for an offensive board and made a power post move on her way to two points. On the next offensive possession, Grace Barry found Lammers for a reverse layup on a nifty out-of-bounds play. In a slugfest like this, the nine-point lead with less than two minutes remaining felt like a commanding advantage.

The energy of the crowd certainly played in favor of the Bulldogs. That was enough to help carry them through. Said Lammers, “It was an awesome game, awesome atmosphere. I love all the fans that come out and all the support our friends and family continue to show us. It was just awesome.”

It was one of those nights for the Broncos. They turned it over only 13 times, but they got very little production in the half court against a Concordia zone. Hastings actually had a chance to cut into a 50-43 deficit on a steal of an in-bounds that resulted in an uncontested missed layup in the final minute. That was the last gasp for the Broncos. Even star Shandra Farmer was just 2-for-9 from the floor. Emma Grenfell paced the visitors with 12 points.

It wasn’t exactly the formula that Olson has typically concocted during his tenure. The Bulldogs were minus-11 in turnovers and had 20 fewer shots from the field than Hastings. It took a collective defensive tenacity and the sheer will of Barry and Lammers to get it done. Lammers finished with 19 points, 11 rebounds and four blocked shots while Barry posted a line of 17 points, eight assists and five rebounds. No other Concordia player scored more than five points.

Chalk up another hard-nosed victory in front of a special Walz atmosphere. Said Olson, “It’s awesome for women’s small college basketball. I hope a lot of the girls around here see how great it can be. For our players, this is why you come to Concordia. You get to play in big games. You get to play in atmospheres like this. This is what you dream about as a little kid. It’s so much fun to play in.”

The Bulldogs will be at home for the final time this regular season when Mount Marty (13-13, 7-12 GPAC) makes a visit to Seward on Saturday. Concordia will honored its accomplished group of nine seniors at halftime of the men’s game that afternoon. The women’s game will tip off at 2 p.m. CT. The Bulldogs have won each of the last seven meetings with the Lancers.