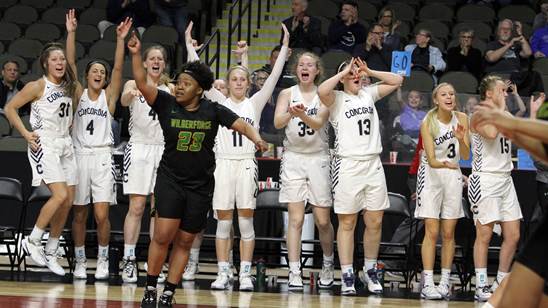 SIOUX CITY, Iowa – This time around, Wilberforce University (Ohio) provided more resistance as the top-ranked Concordia University women’s basketball team returned to the site where it captured a national championship one year ago. Eventually the talent and depth of the heavily favored Bulldogs took over. Concordia forced 31 turnovers in a 75-57 victory in the NAIA Division II Women’s Basketball National Championship first round in Sioux City, Iowa, on Wednesday morning (March 11).

The contest marked the 35th win in 19 all-time national tournament appearances for Concordia (32-2). Fourteenth-year head coach Drew Olson’s squad has its eye on another extended stay in Sioux City. Olson will expect sharper play in Friday’s second round.

“We’re glad that we got a win and we move on,” Olson said. “In tournament play you can’t ride an emotional rollercoaster. You just take it one game at a time and you move on from it.”

Just like 2019, the GPAC champs began their national tournament run by taking on Wilberforce in the first round. Concordia did not fire on all cylinders out of the gate, but it managed to get to the foul line and make 11 of its first 12 attempts from the charity stripe. By halftime, the Bulldog pressure had turned a slight early deficit into a 14-point advantage. Concordia then scored the first six points of the third quarter (two on buckets by Grace Barry) and cruised to the finish.

The atmosphere is rarely an energetic one during morning weekday action at the national tournament. At times, Concordia just looked like a team looking ahead to Friday. That didn’t mean it was all bad. Philly Lammers supplied all 14 of her points in the first half in providing a steadying presence. Off the bench, Chloe Schumacher injected some life into her teammates by knocking down three treys in an 11-point performance.

To be sure, the defending champs were never in danger. Reigning national tournament MVP Grace Barry made 7-of-12 shots from the floor and notched 14 points and three steals. Barry and the fellow starters each played fewer than 20 minutes. Twelve Bulldogs registered in the scoring column. Forty-three points were contributed by the bench, including seven from Taryn Schuette, who also grabbed four rebounds.

Wilberforce (20-9) looked like an improved team from 2019. Also nicknamed the Bulldogs, the team from Ohio got a starring performance from LaTryah Beasley, who posted game highs of 19 points and 17 rebounds. Wilberforce earned an automatic bid to the national tournament via a third-place finish at the Association of Independent Institutions.

“I’m not sure we had the same kind of focus and drive last year when we didn’t know who they were,” Olson said of Wilberforce. “We did still have some individuals who played well. I thought Philly played well and Chloe Schumacher came in and had some nice plays for us. I thought Mack Helman had a nice game too. Collectively, we’ve got to be better.”

Helman chipped in five points, three assists and two steals in a reserve role. Also off the bench, Elsie Aslesen and Taylor Farrell returned after missing time due to injury. All 15 Concordia players on the postseason roster saw action on Wednesday.

Up Next: In the second round of the Naismith Bracket, the Bulldogs will go head-to-head with 15th-ranked Kansas Wesleyan University (26-6), a No. 4 seed. The game is slated to tip off at 12 p.m. CT on Friday (March 13). The Coyotes howled in the first round, toppling Mayville State University (N.D.), 86-64. Kelcey Hinz poured in a team high 23 points for KWU, the Kansas Collegiate Athletic Conference regular-season champion. Concordia and Kansas Wesleyan have not met since the 2010-11 campaign when the Coyotes won both matchups that season.