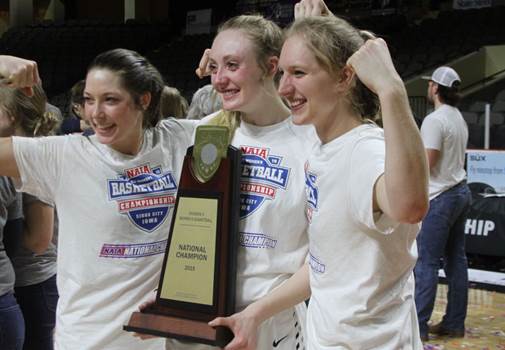 SEWARD, Neb. – One more 2018-19 honor rolled in this April for the accomplished Philly Lammers. The Concordia University women’s basketball All-American was named captain of the Omaha World-Herald NAIA/NCAA Division III All-Nebraska Women’s Basketball Team for the second year in a row. She was joined on the news outlet’s All-Nebraska first team by teammates Grace Barry and Taylor Cockerill. Additionally, Quinn Wragge landed on the second team and Mackenzie Koepke and Riley Sibbel garnered honorable mention selection.

Each of the aforementioned All-Nebraska honorees were key figures in helping the program celebrate its first-ever national title this past March. NAIA Division II National Coach of the Year Drew Olson guided the 2018-19 team to GPAC regular season and postseason titles in addition to the national title. The Bulldogs went 35-3 overall.

In her junior season, Lammers continued down a path that will place her among Concordia’s all-time greats. She was named the GPAC Player of the Year and now joins former NAIA National Player of the Year Bailey Morris as a fellow two-time All-Nebraska captain. A product of Millard West High School, Lammers is the first player in program history to ever be named a first or second team All-American in three-straight years. This past season, the Omaha native averaged 14.7 points, 6.5 rebounds, 2.63 steals and 1.21 blocks while shooting 57.9 percent from the floor and 74.0 percent from the foul line. She was also selected second team all-tournament at the national championship and is a three-time first team All-GPAC honoree. Lammers will enter her senior year with program all-time rankings of seventh in rebounds (823), seventh in steals (271) and 10th in scoring (1,574).

“I think her biggest growth this year has been her maturity and confidence,” Olson told the Omaha World-Herald. “She had very few games where she wavered up and down. She was so consistent.”

Cockerill, who hails from Waverly, Neb., was an honorable mention All-American and a first team All-GPAC selection as a sophomore. She paced the national champions in scoring at 15.4 points per game in her first season as a starter. Cockerill scored 40 points in the season’s opening game for the second highest single game total in school history. Her big moment at the national tournament was a 19-point fourth quarter in the second round win over No. 17 Cardinal Stritch University (Wis.). She also averaged 4.0 rebounds and 1.92 steals this season. She shot 40.3 percent from the field, 36.2 percent from 3-point range and 77.4 percent from the foul line.

Barry was the perfect addition to the 2018-19 team. She transferred in from the University of Nebraska-Kearney and immediately starred in the point guard role. The Lincoln East High School product became the first player in program history to take home the Most Valuable Player award at the national championship tournament. During the five-game run at nationals, Barry averaged 14.2 points, 4.8 assists, 3.4 steals and 2.6 rebounds while going 25-for-48 (.521) from the floor, 6-for-11 (.545) from 3-point range and 15-for-18 (.833) from the foul line. For the season, she averaged 11.5 points, 5.68 assists and 3.66 steals per game.

Senior Quinn Wragge went out on top after a remarkable career as a four-year starter. Over 144 games at Concordia, Wragge piled up 1,776 points, 833 rebounds, 251 steals and 223 assists. On the program’s all-time lists, the Crofton, Neb., native currently ranks third in scoring, seventh in rebounding and ninth in steals. Wragge was named either first or second team All-GPAC in each of her four seasons and was tabbed a third team All-American as a junior in 2018. As a senior, Wragge averaged 10.4 points, 5.1 rebounds and 1.8 steals while shooting 49.1 percent from the field.

Koepke, a Lincoln Lutheran High School graduate, put together a solid freshman season and was named honorable mention All-GPAC. She played in all 38 games and averaged 6.8 points, 2.9 rebounds, 1.5 steals and 0.8 blocks per game while knocking down 64 3-point field goals. The highlight of her national tournament was a 15-point performance versus Indiana Tech. A junior from O’Neill, Neb., Sibbel was a major reason why the Bulldogs broke a program record in 2018-19 for number of turnovers forced in a season. She became a fixture in the starting lineup and averaged 5.1 points, 2.6 steals and 2.0 rebounds per game.