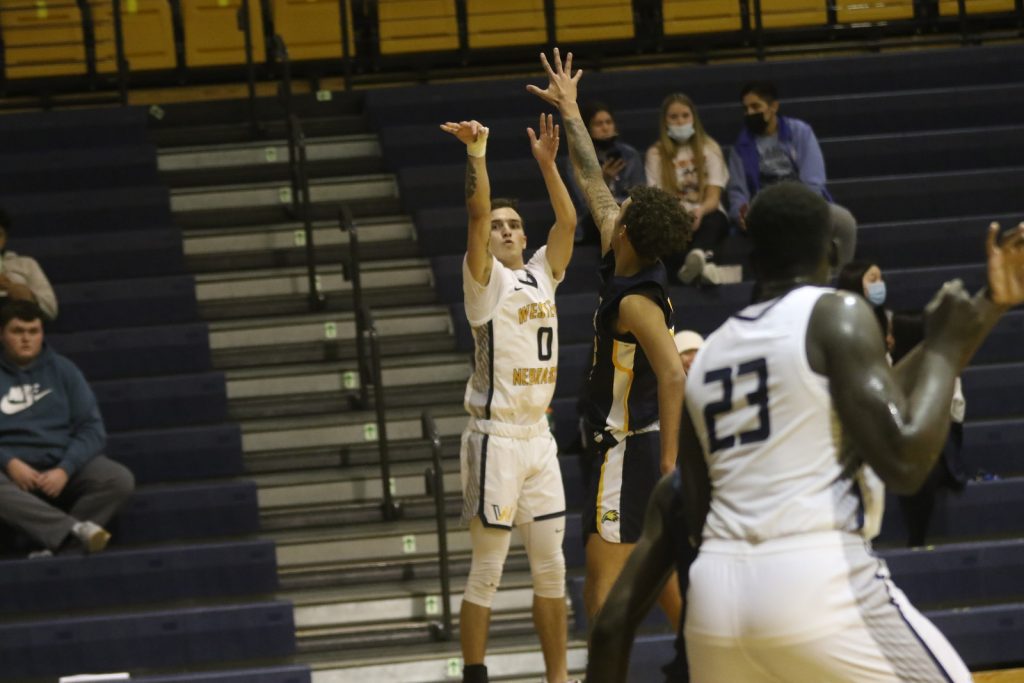 Brown nailed 4-or-4 free throws in the final 15 seconds to seal the win for the Cougars and giving WNCC their fifth win of the season.

The Cougar men will have little time to rest as they head to Central Wyoming College Tuesday night for a men’s only game. Tuesday’s contest will be WNCC’s fourth game in five days.

WNCC coach Billy Engel said his team did enough right things to get the win.

“We played hard the whole game, but we didn’t play hard enough on the defensive end early,” Engel said. “I thought that got us in a little bit in a hole. When we don’t play hard defensively, we aren’t quite as good offensively. I thought in the second half we played a lot harder defensively, played a lot harder on the glass, and had more open looks. Credit Laramie County, they got open looks and hit open looks. That is how the game goes sometimes.”

The game was a shootout between WNCC and LCCC, who went to overtime a couple weeks ago with the Golden Eagles coming out on top 109-108. This time around, there would be no overtime as Brown hit 4-of-4 free throws down the stretch to help WNCC to the 83-79 win.

As much as the ending was climatic, the entire game was a barnburner. WNCC started strong, leading 16-8, but the Golden Eagles came back to tie the game at 16-16. LCCC never could get the lead in the opening 20 minutes as WNCC led 38-29.

The second half saw a back and forth contest. LCCC took the lead at 57-56. It was short-lived as WNCC came back and went up 68-61 as Brown nailed a trey and then converted three free throws after being fouled on a 3-pointer.

WNCC had five players in double figures. Solano and Chase Thompson each had 15 points. Solano had three treys. Brown finished with 13 points with two 3-pointers and a perfect 7-of-7 from the line. Tyler Mack also had 12 points with two treys and Nywesh had 10 points.

Engel said his team will have to be ready to go another night as it will be the fourth time in five nights they will have played. The Cougar men will face Central Wyoming College in Riverton, Wyoming, on Tuesday before coming home to start South Sub-region play on Friday against McCook Community College.

Engel said they need these types of games in back-to-back contests for regional tournament time in April.

“Four games in five days is something we talked about a little bit going into this stretch here,” Engel said. “It is exactly what we need. We knew it was going to be a shortened season where we had to get a lot of games in a short about of days. We need to expect something like this and when it comes regional tournament time, the goal is to win three games in three days. This is exactly what we need right now.”