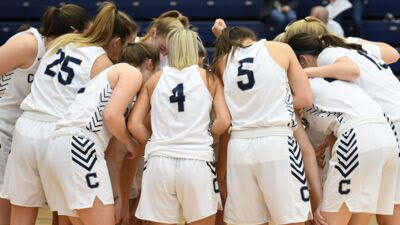 SEWARD, Neb. – There were many positive signs of growth on a day when the Concordia University Women’s Basketball team fell just short of what would have been its most significant victory of the season. First-place Morningside finished the game on a 10-2 run while edging the Bulldogs in a nail-biter, 66-64, inside Friedrich Arena on Saturday (Jan. 16) afternoon. The 11th-ranked Mustangs avoided an upset despite shooting only 32.9 percent from the floor.

Head Coach Drew Olson’s squad is disappointed in the result, but encouraged by the growth shown since the previous meeting with Morningside (an 86-67 defeat). Concordia now sits at 12-7 overall and at 11-5 in GPAC play (third place).

“Our team is fighting like crazy,” Olson said. “And we’ve got a lot of toughness to us. We’ve come a long way … We had a couple late turnovers and the offensive rebounds that Morningside got really hurt us. We get them to miss and if we get the rebound it’s a different game. They’re a great team. They hit shots when they needed it and we didn’t. It was a great game. I’m proud of our team and I know it’s something we’re going to learn from.”

Bulldog star guard Taylor Cockerill twice nailed treys in the fourth quarter that put the Bulldogs up by six in both instances. Concordia still led (64-61) with as little as 45 seconds remaining. That’s about the time when Mustang standout Sierra Mitchell came through with a consequential offensive rebound and game-tying 3-point basket. After an empty Bulldog possession, Faith Meyer drove baseline and scored the game-winner with 1.4 seconds left on the clock.

It was a great escape for Morningside (15-2, 13-1 GPAC), which has padded its lead atop the GPAC standings. So many factors played in favor of the Bulldogs, who managed to limit the Mustangs to 10-for-41 shooting from beyond the arc. Mitchell (team high 15 points) had been 2-for-9 from long range before burying the clutch trey in the final minute.

Concordia also poked holes in the Morningside zone by making use of the height of Kayla Luebbe (13 points and eight rebounds) and Chloe Schumacher (11 points and four rebounds). They combined for 24 points on 11-for-12 shooting from the floor. The work of Luebbe and Schumacher almost overcame the team’s 21 turnovers and the 17 offensive rebounds it surrendered.

“We learned we can’t dig ourselves that big of a hole (as occurred in the first meeting with Morningside),” Schumacher said. “We did a great job of coming out strong and doing the little things like rebounding and getting stops.”

Cockerill led all players with 17 points (6-for-14 from the floor) to go along with her seven rebounds. Mackenzie Koepke chipped in with five points and eight rebounds. The starting five other than Cockerill went a combined 6-for-27 from the floor. Overall, the Bulldogs shot 40.0 percent from the field.

Morningside’s 66 points were its lowest total of the season in conference play. While Mitchell paced her side with 15 points, McKenna Sims added 13 and Grace Meyer collected 12 off the bench. Another of the team’s marquee players, Sophia Peppers contributed nine points, seven rebounds and five steals. The only losses for the Mustangs have come against Benedictine College (Kan.) and Briar Cliff.

The Bulldogs will enjoy a mid-week bye before returning home next Saturday to host Briar Cliff (13-5, 11-4 GPAC). Tipoff from Friedrich is again set for 2 p.m. CT. Concordia will attempt to avenge its 69-59 loss at Briar Cliff that occurred on Dec. 5. Under the leadership of first-year Head Coach Brita Hand, the Chargers have already surpassed their win total from the entire 2019-20 season.