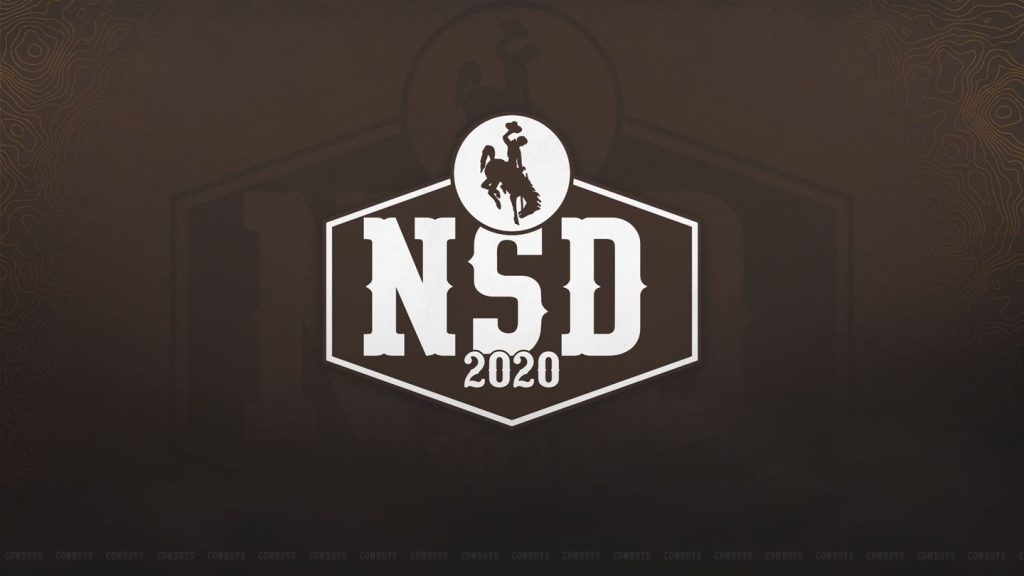 LARAMIE, Wyo. (April 15, 2020) –  University of Wyoming head men’s basketball coach Jeff Linder announced on Wednesday the signing of six players to the 2020-21 roster. Three junior college transfers and three high school prospects signed on the dotted line to play for the Cowboys next season. The six signees helped the Pokes rank No. 53 in the nation and top in the Mountain West in recruiting according to Rivals.com.

“In a short period of time and under less than ideal circumstances, with COVID-19, our staff was able to assemble a tremendous recruiting class,” Linder said. “We identified the areas where we need improvement in order to compliment the returning players and build upon the momentum they created at the end of the season.  One area we are focusing on is our perimeter shooting.  With our style of play it is important to be both efficient and effective shooting the ball from the perimeter.”

“With this recruiting class we were able to sign four players (Marcus Williams, Xavier DuSell, Drake Jeffries, Drew LaMont) who embody our philosophy and have had tremendous success thus far in their budding careers at doing just that,” Linder said. “.  To add these four players to the current players Kwane Marble, Kenny Foster, and Hunter Maldanado will give us a great deal of firepower.  Another immediate focus we needed to address was our size and depth at the post position.  The signing of Eoin Nelson and Graham Ike will give us size and athleticism which will undoubtedly complement returning players Hunter Thompson and Austin Mueller.  My staff and I are extremely excited about the talent of this recruiting class combining with the ever growing abilities of the returning players to make a team to be reckoned with.  Cowboy fans should be excited about the days to come and mark their calendars to watch these fine young men when they return to the Double A to showcase their talents.”

Jeffries is a native of Mattoon, Ill. and will have two seasons of eligibility. He spent last season playing at Indian Hills Community College in Iowa for head coach, Hank Plona and was a three-star recruit according to Rivals.com. Jeffries earned First Team All-Region Honors. He averaged 9.8 points per game for the season in 21 minutes per game. One of the top three-point shooters in junior college basketball, Jeffries connected on 45 percent of his three-point attempts hitting 86 for the season. During conference play, Jeffries hit 47 percent of his three-point attempts. He also added 2.9 rebounds per game from his guard position and 1.1 assists. He helped lead his team to a second seed in the National Tournament.

Prior to his time at Indian Hills, Jeffries redshirted and played one season at Minot State in North Dakota. After redshirting as a freshman, during his redshirt freshman season, Jeffries added 6.4 points and 4.3 rebounds per game. He also shot 40 percent from behind the arc in 32 games with 15 starts.

Linder on Jeffries
“Drake comes to Wyoming regarded as one of the best shooters in all of junior college basketball.  Drake is a late bloomer and has really improved as a player, both physically and from a skill standpoint in the years since high school.  Playing in the D2 ranks and then for one of the best junior college programs in the nation at Indian Hills Community College has helped prepare him to help the Cowboys from day one.  Drake is not only a skilled perimeter shooter and scorer, but he brings excellent length and athleticism to the perimeter.  We love the character, maturity and leadership ability that Drake brings to the Wyoming program”

Nelson is a native of Dublin, Ireland and will have three seasons of eligibility.  He played last season at Otero Junior College in Colorado for head coach, Cole Dewey. He added six points per game and 5.8 rebounds per night. An aggressive offensive player in the post, Nelson shot 58 percent from the field. He recorded 22 points against Laramie County Community College for a season high. He grabbed a season-high 15 rebounds against North Platte Community College.

He played club basketball for UCD Marian in Dublin, Ireland. He helped lead his team to the National Club Finals in 2018.

Linder on Nelson
“We’re excited for Eoin to join the Cowboys.  As a developing player, who is young in the game of basketball, we’re excited that Eoin’s best days are ahead of him.  Eoin’s background in Gaelic football and hurling while growing up in Ireland bring a physicality and toughness to the table.  Big guys that can run the floor and have great hands are a commodity in college basketball, and Eoin can do both.   Eoin is a quick learner as well as a phenomenal athlete who has improved by leaps and bounds the last couple of years.  We look forward to his continued development in Laramie.” Linder said.

Drew LaMont, 6-8, 225, Forward, Plantation, Fla., Indian River State College
Lamont is a native of Plantation, Fla. and will have two seasons of eligibility. He spent last season playing at Indian River State College for head coach Charlie Wilson, as that program is one of the top junior college programs in the nation. He earned first Team All-southern Conference, as he recorded 12.8 points per game to rank second on the team. He also shot 41 percent and made 84 shots from behind the arc and ranked third on the team grabbing 4.1 rebounds per game.

Prior to his time at Indian River State College, LaMont spent one season at American University. He recorded 3.5 points per game as a true freshman. He played 17.5 minutes per game and started three contests. He shot 36 percent from behind the arc and added 1.7 rebounds per game and nearly one assist per game.

He played at American Heritage High School for head coach Brent Maffett. He scored over 1,000 career points and as a senior, LaMont averaged 22 points and 13 rebounds per game. He is the son of Dave LaMont, a play-by-play announcer for ESPN. His father has called numerous Cowboy Football games for the network.

“Were ecstatic to welcome a forward of Drew’s caliber to the Cowboy Men’s Basketball program.  Drew comes from a family of athletes with his brother Drake having played basketball collegiately at Western Michigan and his mother Jennifer having been a swimmer at USC. As a player, Drew brings an ability to stretch the floor with his perimeter shooting and feel for spacing.  Players with his size at 6’8 and skill level are never easy to find in recruiting.  Additionally, Drew’s experience of having been at both the D1 and junior college level provides great perspective and preparedness for our roster.  We look forward to Drew making shots at a high level in the Double A.”

DuSell just finished his senior season at Arizona Compass Prep. He was rated as a three-star recruit by Rivals.com. As a senior and core member of one of the top high school programs in the country, DuSell helped lead his team to a 24-6 record and a top-10 ranking in the state. In addition to his strong contributions during his senior campaign, he recorded averages of 14.0 points, 4.2 rebounds and 3.1 assists as a junior. He played for head coach Ed Gibson.

In AAU he played for Team Harden – Arizona and head coach, Christian Polk in the Adidas Gauntlet.

“We’re really excited Xavier made the decision to follow us from Northern Colorado to Wyoming.  We knew when he signed at UNC that we were getting an impact player that we felt was a Mountain West caliber talent.  Xavier is a multi-dimensional guard who brings a high level of skill and IQ to the court.  X shoots the ball at an elite level and has the ability to create scoring opportunities for himself and others.  We love the character and personality that Xavier brings to the Cowboy program and look forward to his impact in Laramie.” Linder said.

Graham Ike, 6-9, 245, Forward, Aurora, Colo., Overland High School
Ike is a graduate of Overland High School for head coach Danny Fisher and was a three-star recruit according to Rivals.com. His senior season was cut short due to injury, but in his limited action he recorded 12 points and 8.5 rebounds per game.  As a junior, Ike was named Second Team All-Colorado by USA Today. He recorded 17.6 points per game and 12 rebounds during his junior campaign. He helped lead his team to be ranked sixth in the State of Colorado. For his career, Ike added 12.5 points per game and 8.6 rebounds.

In AAU, Ike played for the Colorado Hawks, the same program that current Cowboys Kwane Marble II played for prior to coming to Wyoming.
He was also recruited by Washington State, Saint Louis, UMass, Air Force, Bucknell, Akron and Loyola Marymount.

Linder on Ike
“We’re thrilled to have Graham join the Cowboy family!  Graham has an infectious personality and spirit to go along with his basketball ability.  As a player, he is an excellent scorer on the block.  Graham is a bit of a throwback post player in many ways, as guys who can really score down low are few and far between in today’s game.  He puts a lot of pressure on the opposing defense to keep him from scoring inside!  Graham is continuing to expand his game and will only continue to improve as he gains more experience. We look forward to the energy that Graham will bring to the program every day.”

Williams just finished his senior campaign at Dickinson High School in the Houston, Texas area where he played for Coach Jay Wilson.  Marcus was rated as a three-star recruit by Rivals.com and was one of the top-rated guards in Texas; ranked 14th in the state by Texas Hoops and in the top 10 for his region of the greater Houston area. As a senior, Williams added 21.4 points per game and 7.3 assists. He also added 3.9 rebounds per game and 3.3 steals per night. He earned First Team All-VYPE, a magazine dedicated to Houston high school sports. His team ranked No. 14 in the nation according to MaxPreps.com and ranked second in Texas.  DHS ended their abbreviated season at 32-5 and with a trip to the 6A state final four in Texas’ largest classification.

In AAU he played for Team Harden – Texas in the Adidas Gauntlet for head coach, Eric Dixon. His brother, Faite plays basketball at Prairie View A&M.

“We’re ecstatic to have Marcus join us in Laramie.  Marcus will bring a lot of excitement to the Arena-Auditorium with his explosive play-making and shifty quickness.  Marcus is a proven winner, taking his team to the final four in the largest class of Texas high school basketball.  Marcus’s ability to make reads – especially in ball-screen situations and to play-make for others is elite.  Players that make life easier for everyone else on the floor are hard to come by and Marcus does that at a high level. We look forward to Marcus electrifying the Wyoming faithful in the Double-A for years to come.” Linder said.