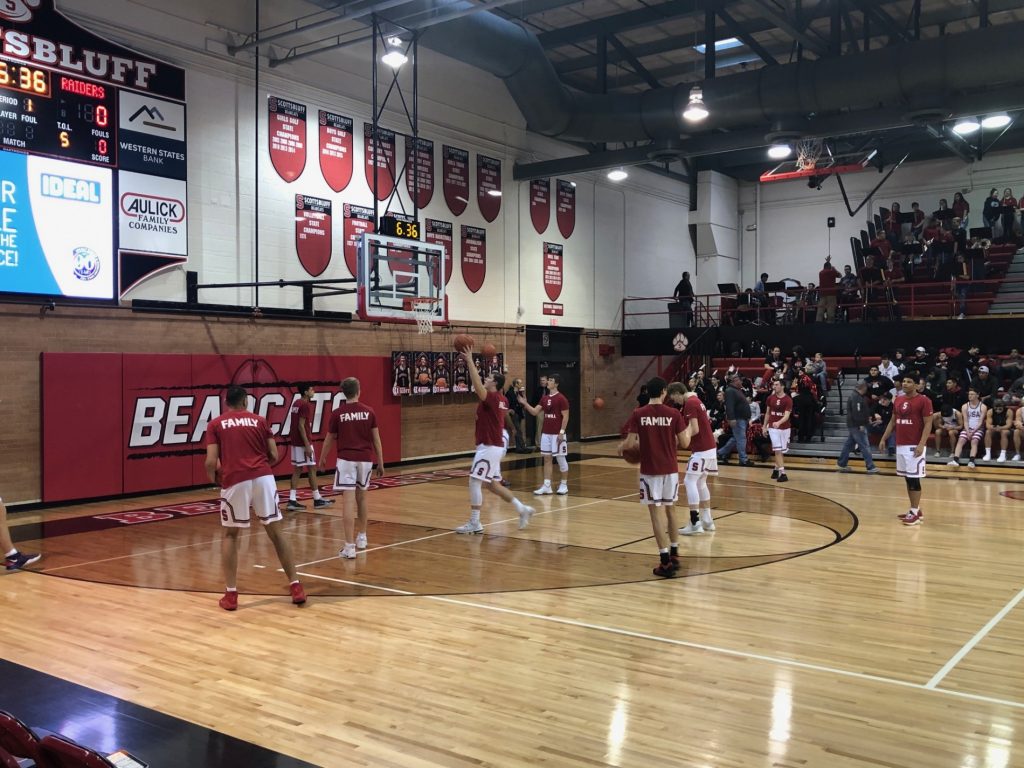 D2-12 at Chadron State: Games tonight have been postponed and moved to Wednesday (tomorrow)..Sioux County vs. Cody-Kilgore, Hay Springs vs. Crawford

D1-12 at Sidney: Games tonight have been postponed and moved to Wednesday (tomorrow)…Paxton vs. Creek Valley 5:30, Garden County vs. Wauneta-Palisade 7:00

D1-12 at Ogallala: Games tonight have been postponed and moved to Wednesday (tomorrow)…Hyannis vs. Potter-Dix, South Platte vs. Leyton

On Monday night at Scottsbluff High School it was the start of the B-8 Tournament with a pair of games and we had both on the Rural Radio Network including coverage on KNEB.tv.

In the opener it was over early and then it was over in a hurry. Scottsbluff scored 34 points in the first quarter against Sidney and then they went up 40 to start the running clock early in the third quarter.

The final was 86-36 as Scottsbluff improved to 22-3 on the season. Dawson Mohr led the team in scoring with 21 first half points. Chance Parker finished with 14 points and 8 rebounds and sophomore Tyler Harre came off the bench with hot shooting in the second half to finish with 11 points.

In the second game last night Alliance took care of business against Gering, winning 66-51. Alliance jumped out to a double digit, first quarter lead and led at halftime 35-25.

Gering got as close as eight in the fourth quarter but a veteran group from Alliance wasn’t going to do things to let Gering get a real sniff of it; not many turnovers, solid rebounding, and they also hit 12-14 at the foul line in the final stanza.

Joel Baker, stymied for part of the game by Gering’s defense, still led Alliance in scoring with 18 points and big man Brayden Palmer chipped in 16.

Bryce Sherrell finished with a team of 17 points for Gering and Kolton Ebbers scored 11 as Gering’s season wrapped up at 9-16.

So the showdown is on for tonight; Alliance at Scottsbluff and we’ll have coverage on KNEB.tv, ALLO 15, Mobius 1500, KMOR 93.3 FM, and steaming at KMORfm.com with pregame starting at 5:45, tip off at 6 pm.

Both teams will be hosting district final games on Saturday but still plenty on the line with seeding and of course the good old personal/program pride.

Scottsbluff has won the first two meetings this season by an average of 12.5 points.

C and D subdistrict championship games are set for Thursday and the hope is schools can all agree on times and location for C and D district final games to be played next Monday.