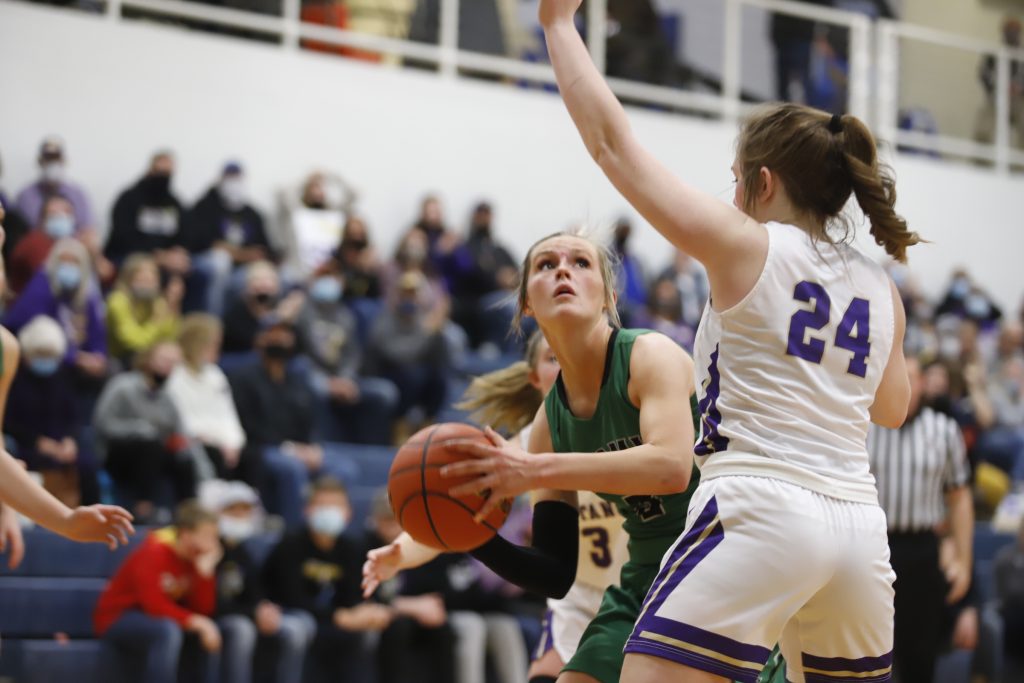 ELM CREEK – The Loomis girls earned a tough victory on Monday evening in their first matchup of the Fort Kearney Conference tournament over Sumner-Eddyville-Miller 36-33. The Wolves will travel to the Viaero Event Center in Kearney on Thursday night to the semifinal round of FKC. Click here to listen to the broadcast.

The contest started off quickly from Elm Creek High School, the host of the as SEM’s Faith Hernandez hit a three pointer to break the scoreless tie, followed by freshman Mikah O’Neill’s lay-in had the Mustangs in an early 5-0 lead. Loomis would remain calm and battle back, adding three pointers in the quarter from Hanna Stewart and Sam Schemper, and Alexis Billeter contributing an additional 5 points for the Wolves. Adi McFarland for SEM added a bucket, but Loomis held the Mustangs to only 9 points in the first quarter as the Wolves led 13-9.

The second quarter began with more consistency brought in by the Mustangs, adding another 9 points. The work came from the free-throw line however, as SEM hit 6 of 7 free throws in the quarter and added a three pointer from Abbie Rohde. Loomis was stifled on their end, only adding in 5 point as Billeter scored her seventh point in the half while Schemper and Stewart knocked down free throws. Loomis and SEM were tied up at 18 entering the half.

The offensive woes continued in the third quarter for the Wolves, but Loomis elected to switch to a slower pace and burn time off the clock to shorten the game. Billeter hit a three point play as Stewart knocked down another triple, but SEM was able to score from four different players: Rohde, McFarland, O’Neill, and Ellie Guthard all had two points. The added contributions had the Mustangs leading at the end of the third quarter, their first lead since Hernandez’ three pointer in the opening moments.

Trailing by only 2 entering the final quarter, Loomis went on a fast 7-0 run after SEM added another two points. A huge three pointer from Schemper took the lead back to Loomis 31-30, and the Wolves held off advances from the Mustangs the remaining time as Loomis earned a 36-33 victory in Elm Creek.

Loomis improves to 10-9 on the season and will square off with #2 Elm Creek at the Viaero Event Center on Thursday. This semifinal matchup can be heard on 880 KRVN, and 106.9 FM in Kearney and 98.5 FM in Grand Island. The Wolves had contributions from Billeter with 14 points, Schemper with 12 points, Stewart added 8 points, and Georgia Crandall tallied 2 points.

SEM falls to 9-6 on the season. The Mustangs had contributions from O’Neill with 11 points, Rohde and Audrey Reiter had 6 points each, Hernandez and McFarland added 4 points, and Guthard tallied 2 points.