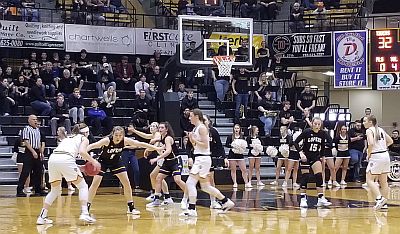 Kearney, Neb. – The 31st-ranked Nebraska-Kearney women’s basketball team shot 61 percent in the first half and got another big performance from sophomore post Brooke Carlson to hold off 16th-ranked Fort Hays State, 72-67, Saturday afternoon in Kansas.

The Lopers (20-2, 9-2) sweep the season series from the rival Tigers (16-4, 7-4) for the first time in 17 years. Next UNK records just the fifth win by a visiting team in Gross Memorial Coliseum over the last six seasons (89-5); Kearney also won at Hays two years ago, 78-64. Finally this marks the 18th 20-win season in program history and the second by head coach Carrie Eighmey in a five-year tenure.

“Super proud of our team. I thought we were pretty focused all week. What’s really amazing about this group is that they stick with the process and weren’t really worried about how big a game it was,” UNK assistant coach Devin Eighmey said. “They are just trying to get better each day. Maturity is happening, stuff that’ll carry over into life.”

UNK controlled the 94th all-time meeting with the Tigers but needed to sink some free throws and make a few plays down the stretch to hold off a veteran squad. The two teams traded offensive haymakers in the first half as they combined for 86 points on 33 of 59 (55.9%) shooting. The output included seven threes with the Lopers closing the half on a 20-9 run to lead by double figures, 48-38.

“We had a 10-point lead going into halftime and then came out strong initially. But they are veteran team and number 16 in the country for a reason,” Eighmey said. “Our players won the game today. They made the plays that needed to be made.”

The Blue & Gold scored the first six points in the third quarter but then defense took over as the squads combined for only 17 points in this 10 minute stretch. Hays whittled that 14-point hole to seven by the end of the third and then five, 59-54, early in the fourth before UNK went on an 8-2 spurt. That key stretch featured buckets by grad transfer Haley Simental (Pueblo West, Colo.), junior guard Kelsey Sanger (Crofton) and four free throws by Carlson (Elkhorn).

UNK still had to sweat it out as the Tigers scored six points in a seven-second span to make it 71-67 with just 16 seconds left. A made free throw finished the scoring and was followed by two Tiger misses.

“It’s just neat to see a group that is locked in and focused while having fun,” Eighmey said. “Our rhythm in the first quarter was unbelievable. Defensively we weren’t able to get stops … we made that run in the second with some actions they had a hard time guarding.”

Carlson was one of five Lopers in double figures as she tallied a team-high 18 thanks to a 7 of 13 effort from the field. Limited to 21 minutes due to four fouls, this marks her fourth straight game in double figures (16.5 avg.). Next Sanger and Simental scored 12 apiece as they combined to make nine field goals with reserves Elisa Backes (11) and Madison Dreckman (10) providing 21 more points.

Backes (Salina, Kan.) was 5 of 8 from the floor and also grabbed five boards with Dreckman (Le Mars, Ia.) having two of UNK’s six triples. The team’s current tally of 200 made treys breaks the school record of 195, set over 30 games during the 2001-02 season.

Kearney, Neb. – The Fort Hays State Tigers shot 52 percent from the field and had eight players in the scoring column to down Nebraska-Kearney, 69-56, Saturday evening in Kansas.

Despite being down a couple of key players things got off to a good start as the Lopers jumped out to a 7-0 three minutes in. However FHSU responded with seven straight as part of a 23-6 run and never looked back. They finished the first half 15 of 24 (62.5 pct.) from the field and 23 of 44 (52.3 pct.) overall. That included a 7 of 12 effort from behind the arc.

UNK, getting a career-high 23 points from Bellevue senior forward AJ Jackson, did make a run midway through the second half. A 9-0 spurt featured three free throws and three Jackson buckets to cut the deficit to single digits, 51-43, with 10:41 to play. But reserve guard Perry Carroll, a tough matchup with the illness, hit two free throws and then junior wing Jared Vitzum nailed a three to push the Hays lead back to 13 points.

His team’s leading scorer and rebounder on the year, the 6-7, 200 pound Vitzum ended with a double double (13 points, 10 rebounds) with the quick Carroll, a 5-10, 195 pound junior, having 14 points in just 17 minutes. He came in averaging 5.1 points a night. Next senior guard Aaron Nicholson had 11 points and four assists. Finally Hays was plus eight on the glass and made 16 of 18 free throws.

Jackson was 10 of 14 to have his best offensive night as a Loper. His previous career-high of 22 came last year in a home win over Hays. Returning to his home state, senior forward Morgan Soucie had 14 points, four rebounds, and four assists with Alliance junior reserve forward Austin Luger supplying seven points, four boards, three steals, and an assist.