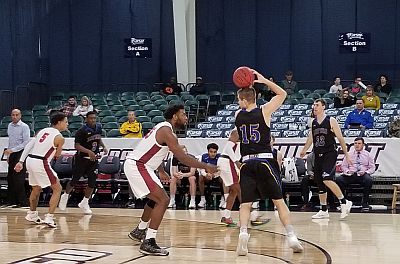 UNK ground out another one against a squad picked to finish in the top half of the league and that came in averaging 75 points per game. The Lopers slowed the pace down, took advantage of 24 turnovers and made some plays down the stretch to win another close ballgame.

“Anytime you win one on the road it feels like two. I’m unbelievable proud of our team … they competed their backsides off,” said UNK head coach Kevin Lofton. “We talk about being tough and gritty and they were that tonight. We talk about playing hard on the defensive end and we did that tonight.”

Down 40-31 with 14 minutes to play, the Blue & Gold used a 17-6 spurt to not only erase its biggest deficit of the night but also grab the lead back. A bucket by Utah junior guard Jake Walker made it 48-46 at the 6:09 mark and then the two teams traded blows the rest of the way.

“I told our guys this was like a boxing match. We wanted to go inside and deliver body punches and then smother them down the stretch. We didn’t want them to get away from us and then hope they might make a mistake at the end,” Lofton said.

Kansas senior forward Morgan Soucie drained two free throws with just over two minutes remaining to cut into a 55-52 deficit. After RSU missed a decent look from three point land, Soucie sunk his 11th career three to give the Lopers the lead for good.

“Morgan hung in there. They were really packing it in but he hit three big ones (jump shots). They were kind of daring him and AJ (Jackson) to shoot from the elbow,” Lofton said. “When he hit the first one you could see him relax and the pressure was off.”

While the ‘Cats tied things up at 57, a Loper team offensive rebound led to another Soucie bucket with 22 seconds remaining. Rogers had a chance to knot things up at 59 all but senior Marques Sumner, a 73% percent free throw shooter, missed the first of two freebies. UNK closed things out by going 3 of 4 at the line over the final three seconds.

Soucie warmed up to tally a team-best 19 points thanks to six buckets and a 6 of 6 effort at the line. Next, Bellevue senior forward AJ Jackson also made six shots to tally 14 with Walker at 14 thanks to, guess what, six made field goals. Finally Texas senior point guard Chase Winchester supplied five points, two assists, two boards and a steal before fouling out late. 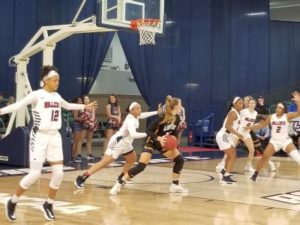 The Lopers improve to 14-2 (3-2) while the Hillcats, an MIAA newcomer, lose a 10th straight game (2-13, 0-6). Rogers began its women’s basketball program back in 2007 under current Nebraska head coach and former UNK graduate assistant Amy (Gusso) Williams.

Improving to 3-1 in true road games, UNK blew things open with a 23-9 second quarter. The Lopers ended the night with 12 three pointers, the seventh time this year the squad has had a double digit trey total. The hottest hand belonged to Wahoo sophomore reserve guard Aspen Jansa who tallied a career-best 17 points on 5 of 7 triple shooting. She came in shooting a team-best 46% from downtown.

“Real proud of our girls. That was fun to watch and be a part of. Everyone got in and did a good job,” said UNK assistant coach Devin Eighmey. “That was disciplined basketball and we came out focused.”

Rogers, with 11 players available and none over six feet, put up a fight over the first 10 minutes. They trailed by only a 19-13 margin thanks to two threes and 3 of 4 free throw shooting. However, RSU tallied just 16 points over the next 20 minutes and ended the night shooting 33% (17 of 51) from the field.

“We stretched things there in the second quarter so give credit to our bench. They were really productive and we’ve had a couple of second quarters like that this year” Eighmey said. “We hit some (three point) shots tonight but I thought they were good shots. They were in rhythm and shots people were capable of hitting.”

Besides Jansa’s heroics, South Dakota freshman reserve guard Trinity Law tallied a season-best 11 points on 4 of 9 shooting as the Lopers finished up shooting 46% (31 of 67) from the field. UNK also took advantage of 21 RSU turnovers and made 5 of 7 free throws.

Rogers, with no one averaging double figures on the year, got 11 points and 11 rebounds from senior guard Darian Jackson.