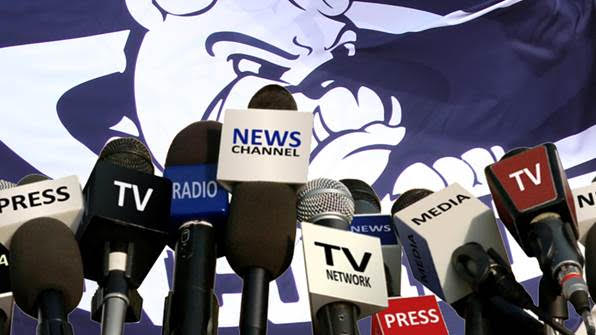 What impression has Concordia Athletics made upon local media and the surrounding communities? We asked several media members for their answers in order to find out. One theme in particular emerged: Concordia athletes and coaches have earned a strong reputation for how they conduct themselves on and off competitive venues.

What is the first thing that comes to mind when you think about Concordia Athletics?

Phil Bergman, 3 News Now Reporter/Anchor (previously of KLKN-TV): The first thing that comes to mind with Concordia Athletics is women’s basketball. The team has been so dominant over the past few years and Coach Olson has made it in to a regional if not national power. Walz Arena is also a terrific venue to watch a basketball game in. The other thing that comes to mind with Concordia is the access we get to coaches and players. Working with Concordia I felt I was able to build a relationship with the players and coaches and help tell their stories.

Tyler Cavalli, KRVN Radio Program Director/Concordia Play-By-Play Voice: The first thing that comes to my mind when I think of Concordia Athletics is family. In my four years of broadcasting Bulldog athletics, it really felt like a family from the administration down to the coaches and players.

Dan Corey, 10/11 News Sports Anchor/Reporter: The first thing that comes to mind when thinking about Concordia Athletics is the hospitality that is received when we cover the Bulldogs. From the fans to the student-athletes and the coaches, I always feel very welcomed in Seward. Covering sports over the years, Concordia ranks up there with schools that I love covering.

Stephanie Croston, Seward Independent Sports Editor: Excellence. I’ve watched a lot of Concordia sports since coming to Seward, and the athletes and coaches are always striving for excellence. Some are more successful than others, of course, but excellence is always the goal. I know coaches stress a Christ-honoring approach, which I also appreciate. The facilities are top-notch, which is also a great draw for recruiting and fans. I enjoy going to the games and cheering on the Bulldogs from behind my camera. 🙂

Marjie Ducey, Omaha World-Herald Reporter: Excellence. You have some really good teams in a lot of sports.

Clark Grell, Lincoln Journal Star Sports Editor: The across-the-board excellence/success. Concordia has programs with sustained national success (track, women’s hoops, wrestling, etc.) and then other strong programs that can make national noise every 2-3 years, it seems. While most athletic departments have programs that struggle for years and for various reasons, that doesn’t seem to be the case at Concordia.

Jayson Jorgensen, KRVN Radio Sports Director: Number one, I think of Concordia women’s basketball when I think of Bulldog Athletics. What a run they have had. Each spring you can just count on them being in the tournament and having a chance to win it all. Being that consistent has to be tough!

Gene Schinzel, Omaha World-Herald Sports Reporter: The first thing I think of, especially over the past decade or so, is how competitive Concordia is on a conference and national level in a number of sports, whether that’s basketball, soccer, track or baseball. That says a lot about the health of the overall athletic department and the kind of student-athletes who are attracted to the school.

Kevin Sjuts, 10/11 News Sports Director: Walz Arena.  More specifically, I think of a Saturday afternoon basketball game with the sun shining through the windows.  I absolutely love that scene.

Andrew Ward, KLKN-TV Sports Director: I would say the first thing that comes to mind when I think of Concordia athletics is the environment. It’s a high school atmosphere with college athletes, which makes it a whole lot of fun to cover.

How would you describe the interactions you’ve had with Concordia athletes and coaches?

Phil Bergman, 3 News Now Reporter/Anchor (previously of KLKN-TV): The interactions I’ve had with Concordia athletes and coaches have been terrific. They’re all extremely friendly and go out of their way to make you feel welcome on campus and were always available to answer questions. Coach Daberkow was always extremely friendly and Coach Olson was also great to work with.

Tyler Cavalli, KRVN Radio Program Director/Concordia Play-By-Play Voice: My interactions with all of the coaches and athletes was terrific. Over time I was able to build trust with everyone and that allowed a professional relationship to mold over time and that helped me tremendously on the air.

Dan Corey, 10/11 News (Lincoln) Sports Anchor/Reporter: The interactions I’ve had with the Concordia coaches and athletes has been nothing short of outstanding. Every coach and player that I’ve spoken to has been genuine, whether that’s been at their sporting event or when they’re not in uniform or coaching. I’m appreciative of receiving that kindness because it makes our job that much easier.

Stephanie Croston, Seward Independent Sports Editor: Great. I know that’s not a terribly specific term, but it’s the best I can do. 🙂 All the times I’ve asked for information, story ideas, contacts from the sports information office, the help has been outstanding and quick, which is fantastic when I’m on deadline. I know some of the athletes from covering them in high school, and it’s always nice to catch up with them when I can. When I need to interview someone I don’t know and who doesn’t know me, they’re still willing to answer my questions. I’ve chatted with some on the sidelines, and it’s always fun to get to know them. I don’t have to talk to the coaches as often, since Jake provides the game summaries and coaches’ comments, but when I do talk to them, they’re friendly and willing/happy to help me out. That attitude is much appreciated.

Marjie Ducey, Omaha World-Herald Reporter: Accommodating. Everyone has always been great to work with.

Brett Edwards, Former KLKN-TV Sports Director: I always had great interactions with athletes and coaches. Everyone was nice and accommodating and appreciated our coverage.

Clark Grell, Lincoln Journal Star Sports Editor: Among the best. The access to coaches and athletes is great, they’re always willing to give you whatever time you need, and they are always extremely appreciative of the coverage. Seems like it’s something they don’t take for granted.

Jayson Jorgensen, KRVN Radio Sports Director: In my time doing the games, everyone was top notch. The staff and the players were very easy to deal with, it really helped with trying to be prepared for the games. From day one we were welcomed on the bus and I felt very appreciated by everyone.

Gene Schinzel, Omaha World-Herald Sports Reporter: It seems like whoever the coach – I think I’ve interviewed Concordia coaches in football, volleyball, soccer, basketball, wrestling, track, softball and baseball in recent years – is generally generous with their time and prompt in returning calls if a message is left, which makes the media’s job much easier. For example, last month I wrote about the senior throwers from the track team who were returning and Ed McLaughlin talked to me for about 25 minutes after Matt Beisel talked for about 15. I’ve had a number of good conversations with the likes Ryan Durdon and Philly Lammers over the years.

Kevin Sjuts, 10/11 News Sports Director: The interactions I’ve had with everyone at Concordia have been wonderful. Administrators, coaches, players and fans all make me feel so welcomed. I’m always greeted with a smile and a “Thanks for coming,” which doesn’t happen with every event 10/11 covers. I can’t think of a time in which an interview request was denied at Concordia. In fact, most interviews turn into 15-20 minute conversations after the camera stops recording.

Andrew Ward, KLKN-TV Sports Director: The interactions I’ve had with your student-athletes and coaches have been nothing but phenomenal. Everyone is so nice and appreciative of our coverage, which makes us want to do more stories with Concordia.

Do you have a favorite Concordia athlete/moment you’ve covered?

Phil Bergman, 3 News Now Reporter/Anchor (previously of KLKN-TV): Athlete: Philly Lammers (obviously). My one-on-one interview with her is one of my favorite and funniest interviews I’ve done, and could be considered the first-ever of my “Phil in the Blank” segments. I think we totaled more than 10 “Phil” puns in the 1:30 segment.

Moment: The 2018 Women’s Basketball GPAC Tournament win and court storming and 2018 National Title game that they lost were great experiences. I think that team was incredible and it was fun to see them on the NAIA’s biggest stage.

Other Favorite Moments: Taking Creighton women’s basketball to overtime in a scrimmage and being with the baseball team on selection day for the NAIA tournament.

Dan Corey, 1011 News (Lincoln) Sports Anchor/Reporter: My favorite Concordia moment is a no-brainer-Concordia women’s basketball winning the 2019 national championship in Sioux City. Being up there the year before when the team lost, it was great to see them complete the job and win it the very next year. So happy for Coach Olson and those players who worked so hard for it. That game was definitely one of my highlights in working at 1011-TV.

Stephanie Croston, Seward Independent Sports Editor: Oh gosh. There are a couple that jump to my mind immediately. I had the opportunity to cover the men’s national championship game back in 2003. I got to ride the student bus down to Branson and be on the sidelines for the game. It was the first (hopefully not the last) national championship game I’d ever gotten to go to and, even though Concordia lost, it was a great moment. The second would be the women’s national title in 2019. While car trouble made me miss the game itself, I got there for the aftermath – the confetti on the floor, the postgame interviews. It was another amazing moment and one that I hope to see repeated. As far as athletes, the obvious answer is the kids from the area I got to cover in high school. Selfishly, I love it when our local athletes choose to stay local. I feel like I know them already (even though I really don’t :)), so to have the opportunity to watch their skills improve over four more years – I feel like a proud parent. 🙂

Gene Schinzel, Omaha World-Herald Sports Reporter: The first moment that comes to mind is the 2019 women’s basketball championship game. That’s a program that had a number of close calls at nationals over the years, but the breakthrough in that game was one you could tell the players, coaches and fans truly relished. I remember the players, who didn’t want to leave the floor, making confetti angels on the court well after the game ended.

Kevin Sjuts, 10/11 News Sports Director: Covering Concordia’s 2019 NAIA Women’s Basketball Championship season was amazing. The level of talent on that team was so impressive. Plus, they made it pretty easy to get highlights for the nightly newscast. But here’s a quick personal story: When covering the CIT at Walz Arena in 2017, the men’s championship game was too good to leave early. I stayed for the duration, despite a tight deadline for the 10 pm newscast. The ending was exciting and the students rushing the court made for some amazing video. All the while, I kept checking my watch thinking ‘Man, I need to get back to the studio to edit the highlights.’ Following the game, the teams gathered for the trophy ceremony and prayer. I was wanting to get a few quick interviews, but again — time was ticking. Then everyone in the arena – players, fans, coaches sang the Doxology. It was beautiful, powerful and forced me to pause. It was a moment that revealed the heart of Concordia. And for me, it reminded me that I was on God’s time, not mine. I will never forget that. The highlights and interviews aired on time that night, too.