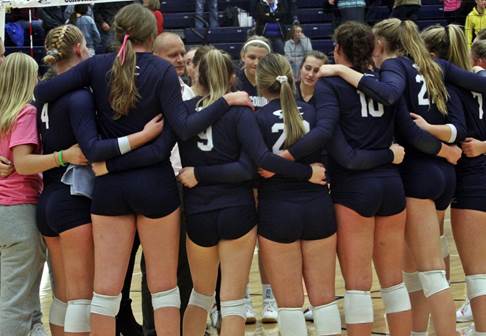 SEWARD, Neb. – Head coach Ben Boldt had called this a potential “separation week” for his Concordia University volleyball team. If the Bulldogs could hold serve at home, they would have a chance to separate themselves from the middle of the GPAC pack. For the second time in three nights, the Bulldogs shook off a stumble in the opening set and protected the home court. They sent 25th-ranked Morningside packing, 21-25, 28-26, 27-25, 25-18, on Friday (Oct. 11) night.

This is how Boldt would have hoped to enter a period of seven-straight days without a match. Concordia has moved to 18-3 overall and to 7-3 in the GPAC (currently in third place). The Bulldogs also defeated Doane on Wednesday.

“I was really happy with how we responded to a tough opponent,” Boldt said. “Morningside beat us at Morningside and I wasn’t necessarily sure how we were going to start. It comes back down to the things that we can control. That’s what the two early timeouts were about. It was about controlling our attitude, effort and communication. We responded well.”

You’re forgiven if you began to think perhaps the Mustangs (12-7, 4-5 GPAC) were just not a good matchup for Concordia, which fell in four sets in Sioux City on Sept. 17. Boldt called timeouts in the opening set with the Bulldogs facing deficits of 9-4 and 13-4. Concordia also trailed 21-15 in the second set. This is probably not a match it would have won a year ago.

But this is a different type of team with a different resolve. The Bulldogs were not keen on seeing Morningside’s high-flyin’ middle blocker duo of Emma Gerber and Brittni Olson have their way all night. Camryn Opfer (17 kills), Emmie Noyd (16 kills) and Kalee Wiltfong (11 kills) came through in a big way in combining for 44 of Concordia’s 69 kills on the night.

“Even though we had a rough start, we just told ourselves in that second set that we were going to take care of the ball, get mentally strong and push through,” Wiltfong said. “I thought our tempo when it got closer was a lot better and our urgency increased. Coach talks a lot about that. When he have it, we play much better.”

The Bulldogs recovered in time to salvage the night and, as the set scores indicate, the second and third sets produced high drama. It caused the type of stress that prompted Boldt to joke afterwards that he felt like he had just finished a marathon. Concordia rode its comeback in the second set to a hard-earned triumph in the third, which included what sounds like an impossibility – 25 kills.

Noyd put away a combined 10 kills over the third and fourth sets as the Bulldogs adjusted to the strong Morningside block (Mustangs finished with an 11-5 advantage in blocks). Opfer added 17 digs to her stat line while Marissa Hoerman topped all players with 25 digs. Setter Tara Callahan piled up 50 assists while leading an offense that outhit Morningside, .198 to .165.

“I put a challenge down to our middles,” Boldt said. “We worked in practice this week with the emphasis on them being the woman, getting up in transition and owning the net as a blocker. They weren’t doing that in the first set. Once they started doing that, we started clicking. They’ve got to feel it before they do it and they felt it tonight.”

The 18-3 overall mark equals the 2005 squad for the program’s top 21-match record during the GPAC era (2000-present). For those wondering about rankings, the Bulldogs will have to wait until at least Oct. 23 (next NAIA national poll release) to crack the top 25.

The Bulldogs will now have more than a week off before appearing again inside Walz Arena on Saturday, Oct. 19. On that date, 22nd-ranked Dordt (14-6, 5-3 GPAC) will visit town for a 3 p.m. CT first serve. It will be the first and only regular-season meeting of the season between Concordia and Dordt.