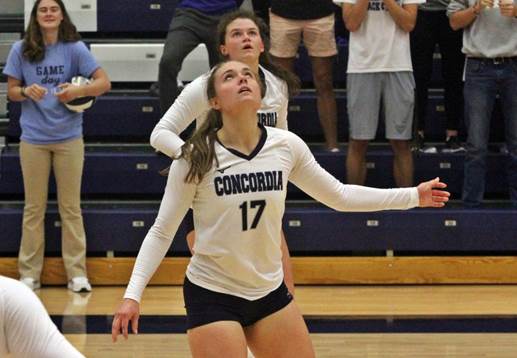 YANKTON, S.D. – Following Friday’s nailbiter at Briar Cliff, the 17th-ranked Concordia University volleyball team made its Saturday afternoon match a much snappier one. Sure there was that 8-1 deficit in set No. 3, but the Bulldogs got it together and took care of Mount Marty, 25-20, 25-17, 25-22, in Yankton, S.D. Concordia has now won six in a row while the Lancers have dropped 11-straight.

“We had a really good second set with great focus,” Boldt said of the latest victory. “Our middles were playing really well. Mount Marty has some crazy servers and they were getting us out of system (in the third set). We couldn’t find our offense and we got aced a couple times. It was nice to chip away and we eventually got to where we needed to be.”

Mount Marty did an exceptional job of limiting the Bulldog pin hitters, but things were left wide open for the middle blocking duo of senior Emmie Noyd and freshman Kalee Wiltfong. Noyd pasted 16 kills on 29 attacks (.517 hitting percentage) while Wiltfong swatted eight kills on 12 swings (.583). Wiltfong went off for five kills during the second set.

Noyd and Wiltfong were often one-on-one in the middle of the court while spurred by setter Tara Callahan (31 assists). They helped collaborate on a .286 team hitting percentage, compared to a .143 clip put up by Mount Marty. Camryn Opfer topped Concordia with four blocks while Kaylie Dengel pitched in with nine digs.

Straight-set losses have happened regularly within the GPAC for Mount Marty. The Lancers (7-21, 0-12 GPAC) nearly pushed this one to a fourth while being led by Elizabeth Watchorn. She floored a team high 14 kills and hit .294.

Realistically, the Bulldogs can still earn the No. 2 seed in the final GPAC standings, but the road to get there will not be without barriers. The remaining regular-season schedule includes No. 8 Jamestown, Dakota Wesleyan and No. 1 Northwestern. The Jimmies (22-4, 10-2 GPAC) will be inside Walz Arena on Thursday (Oct. 31) for a 7:30 p.m. CT first serve. It will be one of the program’s most anticipated home matches in years.

“It will be a national-type match,” Boldt said. “We’re excited about it and the preparation for it. We play on a Thursday, which is different from normal. It’s a situation where we absolutely have to play our best to win. We love those types of challenges.”