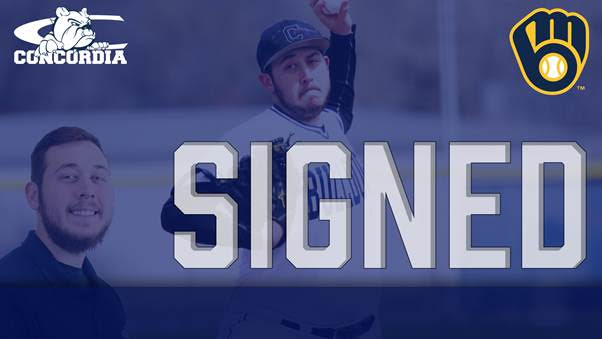 SEWARD, Neb. – Concordia University pitcher Jason Munsch will get his shot at professional baseball. Via Twitter, Munsch announced on Monday (June 15) afternoon that he has signed a contract with the Milwaukee Brewers organization. He is believed to be the first Concordia alum to sign with a Major League Baseball team since Faszholz brothers Gene (St. Louis Cardinals) and Dave (New York Yankees) played in affiliated minor league baseball in the 1950s.

MLB held its five rounds of the 2020 draft last week. Had the draft been a typical 40 rounds, Munsch would have likely heard his name called. Instead, Munsch has inked with the Brewers as an undrafted free agent.

Wrote Munsch in a statement, “I’m thankful to all of my family and friends who have supported me in my endeavors. I’m so excited for the opportunity to play for the Brewers and I can’t wait to represent Concordia at a professional level.”

In 26 innings of work in 2020, Munsch allowed just a single unearned run on nine hits and six walks. He struck out at least nine hitters in each of his four starts while totaling 59 punch outs. The native of Campbell, Calif., tossed a seven-inning, 16-strikeout no-hitter at Briar Cliff on March 13 prior to the cancelation of the remainder of the season. In his career, Munsch notched a 17-9 record with a 2.78 ERA and 281 strikeouts in 184.2 innings. Munsch owns school records for career strikeouts (281) and earned run average and for strikeouts in one game (20).

Munsch was recruited by Head Baseball Coach Ryan Dupic out of Westmont High School in California. The 6-foot-2 lefty earned his degree in chemistry from Concordia. He was twice named first team All-GPAC and was selected by “NAIA Ball” to its All-NAIA Team in 2020. Munsch collected two NAIA National Pitcher of the Week awards this past spring from the National Collegiate Baseball Writers Association.

Dupic stated, “I’m very happy for Jason to have the opportunity to realize this dream. He has had a tremendous impact during his time at Concordia. His growth has been fun to watch and the work he’s put in and responsibility he’s taken for his career has led to this tremendous opportunity, which he very much deserves. He’s going to have a whole bunch of people in his corner as he continues his career with a great organization.”