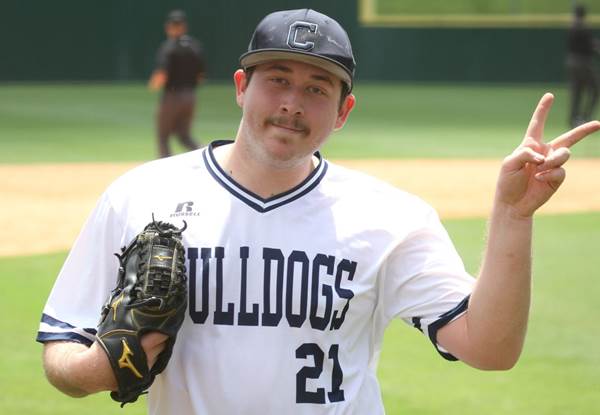 HENDERSON, Tenn. – Two years after stepping to the mound for the first national tournament game in the history of the Concordia University baseball program, Jason Munsch again took the ball. The junior lefty ace dominated while helping the Bulldogs claim their second ever win at the NAIA Baseball National Championship Opening Round. Concordia wound up playing twice in Henderson, Tenn., on Monday (May 13) with the results being a 3-1 victory over Clarke University (Iowa) and a 14-6 loss to No. 12 Oklahoma Wesleyan University.

The split on day one of the opening round (Henderson Bracket) means fifth-year head coach Ryan Dupic’s squad will fight to keep its season alive on Tuesday. The Bulldogs (33-19) acquitted themselves well in against top notch competition far from home.

“Jason pitched really well obviously the first game and that got us going really well,” Dupic said. “We’ve been here a couple times now – and you have to pitch really well. It’s tough because there are some really good offensive teams here. It challenges you a lot to try to prevent runs. We’re able to do that the first game. Playing with the lead was really big for us.

“Oklahoma Wesleyan can swing it. Our guys did a good job offensively as well. They put a lot of pressure on you and don’t give away easy outs.”

At least to date, Munsch can claim the best pitching performance ever by a Bulldog on the national stage. He struck out six of the first seven hitters he faced on his way to a 12-strikeout performance. Munsch surrendered a lone run in the eighth and allowed only two hits all day. One of those hits came when a Concordia outfielder slipped on what would have been a routine fly out. Munsch fired 114 pitches in his eight-inning gem.

“For me it was just taking it one pitch at a time,” Munsch said. “When I was warming up earlier I didn’t feel the best, but I just knew as long as I trusted myself I’d be all right. I just went out there and did my best to pick up the team.”

The Bulldog offense backed Munsch by putting up a run apiece in the first, third and fifth innings. Evan Bohman had a hand in each of those runs as part of his 3-for-4 game. Bohman drove in a run with an RBI single in the third. Teyt Johnson knocked in the first run with a sac fly. The final tally was scored by pinch runner Peyton Scott, who stole third and scored on an errant throw. Dylan DuRee then came on and struck out the side in the ninth and picked up his ninth save of the season.

The high powered Eagles (44-9) of Bartlesville, Okla., entered the opening round leading the nation in runs per game. They flashed plenty of firepower Monday night and chased Bulldog starting pitcher Sasha Jabusch before he could get through four innings. Paced by John Lantigua’s 4-for-6, two-double outing, Oklahoma Wesleyan rapped out 17 hits. It put up crooked numbers in the second, fourth, seventh and eighth innings.

Concordia’s offense battled against star Eagle pitcher Michael Anderson (12-1), who worked up a hefty pitch count in eight innings of work. Luciano DePamphilis tagged him for a solo homer and Beau Dorman kept the Bulldogs in it with a three-run smash in the top of the sixth. At that point, Concordia trailed 8-5 before Oklahoma Wesleyan pulled away. Johnson highlighted the Bulldog attack with a 4-for-4 night that included a ninth-inning RBI single.

Concordia did not commit an error on Monday in support of six different pitchers. Thomas Otte, Dresden Wilson and Adrian Cotton all appeared out of the bullpen versus the Eagles.

The season will be on the line when the Bulldogs meet up with either 14th-ranked Texas Wesleyan (No. 3 seed in the bracket) or Clarke (28-22) at 7 p.m. CT on Tuesday. The Rams (44-15) dropped a 3-1 decision to host and second-seeded Freed-Hardeman University (Tenn.) on Monday. Clarke and Texas Wesleyan will play the first game of the day in Henderson on Tuesday.

It will be a long wait before Concordia takes Carnes Field on day two in the Henderson Bracket. Says Dupic, “I kind of prefer (the wait). It was a long day today. It will be nice for everybody to get some rest, relax a little bit and enjoy the experience.”