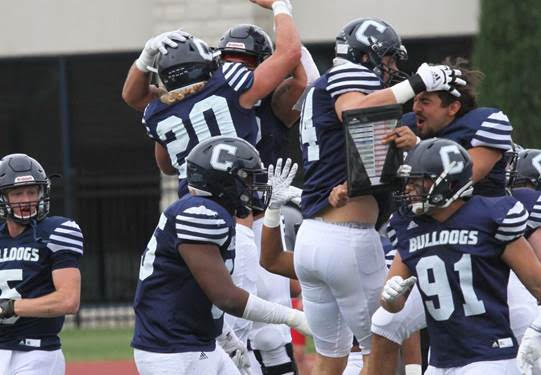 SEWARD, Neb. – The defense is shaping up to be as stout as the Concordia University football team has put together in years. The ball-hawking Bulldogs caused seven turnovers and held visiting Briar Cliff to just 191 total yards of offense in a defensive battle that unfolded on homecoming Saturday (Sept. 28) inside Bulldog Stadium. There were a combined 20 punts in a quirky, wild affair that ended in a 16-14 Concordia win.

The vibe in the locker room is dramatically more upbeat than it was two weeks ago. However, third-year head coach Patrick Daberkow would insist that his squad never lost faith. The Bulldogs are now 2-2 overall (2-1 GPAC) with back-to-back conference victories.

“A winning locker room is pretty special,” Daberkow said soon after the Bulldogs continued their tradition of singing The Doxology in the postgame locker room. “I always love taking part in that. I’m excited for our team.

“Any time you get that many takeaways in a game you’re probably going to win. I would have expected us to win by more than that. That was maybe one of the best coaching efforts by our offensive coaching staff as well. We had to try a lot of stuff. Their defense was good but man, I wouldn’t trade our defense for the world.”

Believe it or not, Concordia scored only three points off the seven turnovers. Incredibly, the Chargers (3-2, 2-2 GPAC) committed five turnovers in the first quarter alone. Briar Cliff found the football to be more slippery than a greased pig, coughing up five fumbles that were all recovered by the Bulldogs. Even quarterback Jake Kemp, who also long snaps on punts, dove on a muffed punt.

All of that happened and yet it was still a wire-to-wire grinder. Concordia picked up two crucial first downs on its final offensive possession to melt most of the remaining clock in the fourth quarter. The Chargers got one last possession, and fittingly, fumbled the ball away on a desperation lateral. Zac Walter fell on it as the final seconds ticked off.

The Briar Cliff defense, also one of the best in the nation, nearly bailed the team out. The Bulldogs did just enough through the air. The big offensive highlight of the day was a 55-yard bomb for a touchdown that went from Kemp to sophomore receiver Korrell Koehlmoos late in the first quarter. Koehlmoos finished with eight catches for 137 yards and a touchdown and is another blossoming receiver.

“We just worked our butts off,” Koehlmoos said in response to the two defeats to open up the season. “The Buena Vista game hit us right in the heart so we wanted to finish games. That’s what we did today. Our defense – No. 1 in the nation right there.”

The linebackers were already great while Concordia has made strides in every level of its defense. Freshman AJ Jenkins made a big impact on Saturday by forcing one fumble and by picking off a pass. All-American Lane Napier struck for a sack and a couple of quarterback hurries. Linebacker Riley Bilstein added eight tackles (one for loss) and for the second game in a row, Derek Tachovsky came away with an interception.

“We knew if we shut down the run we could force them to pass,” Tachovsky said. “Their quarterback was floating some passes up and we were able to get some interceptions. We just played hard. We came away with more turnovers than we thought we were going to.”

The Chargers netted 17 rushing yards on 26 attempts. It was tough sledding both ways. Sack yardage put Concordia’s rushing total at just 13. Ryan Durdon carried 24 times for 40 yards. In the passing game, Kemp went 20-for-42 for 265 yards and a touchdown. Cayden Beran caught six passes for 70 yards.

Freshman kicker Jordan Spilinek provided a lift by drilling field goal attempts from 34, 29 and 35 yards out as part of a perfect day. His final kick early in the fourth quarter proved to be the game winner. No Bulldog kicker had made three field goals in a game since Kenny Zoller in 2012.

The Bulldogs will embark upon their longest road trip of the season next week when they head to Jamestown, N.D., for a 1 p.m. CT clash next Saturday (Oct. 5) with the Jimmies (0-5, 0-3 GPAC). The two sides also met in Jamestown last season with the result being a 16-13 Concordia victory. This marks the second season that Jamestown has been a member of the GPAC.