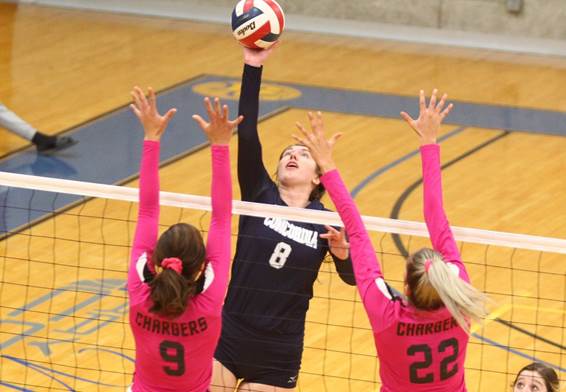 SIOUX CITY, Iowa – Every road match is a potential landmine in the GPAC. The 17th-ranked Concordia University volleyball team avoided one, barely, on Friday (Oct. 25) night at the Newman Flanagan Center in Sioux City, Iowa. The Bulldogs trailed 9-6 in the deciding fifth set before rallying for a 25-27, 25-19, 25-18, 26-28, 15-13, victory over Briar Cliff.

This was only the second time this season that head coach Ben Boldt’s squad had been involved in a five-set match. Winner of five in a row, Concordia has improved to 20-3 overall and to 9-3 in GPAC play (third place).

“We were able to stay steady and didn’t get tense when it came crunch time,” Boldt said. “What really kind of took us over the edge was that our serve and our block and defense showed up at the right time. It was a really good job in that stretch (in the fifth set) to get back in the game. We had some good serves, some good plays on defense and put it away with our attack.”

This one was definitely a bit stressful on a night when three of the sets came down to two-point margins. The breaks often seemingly going against the Bulldogs on several occasions. The Chargers (13-15, 3-10 GPAC) played like a team desperate to end what is now an eight-match losing streak. Boldt credited Briar Cliff with being a difficult team to defend. Concordia somehow withstood the Chargers hitting .429 in the fifth set.

But the Bulldogs outhit Briar Cliff, .286 to .228, for the night (blocking was even at 10-10). Freshman Camryn Opfer knotted the score in the fifth set, 9-9, with back-to-back kills. The Chargers edged back in front at 11-10 before Emmie Noyd got going late. She swatted kills for three of the team’s five points. Kara Stark ended the night with a kill of her own.

“It’s been nice to have the ability to put the ball away when we’re one-on-one,” Boldt said. “That happened tonight because our middles were getting up and allowing our pins to get swings. Kara and Cam did a great job of putting the ball away and when we really needed it, Emmie stepped up and had some big swings down the stretch. Briar Cliff is a really hard to defend because they attack the ball really high and mix up their shots a lot. Our defenders did a great job.”

The Bulldogs will have an overnight stay during this particular weekend journey. They will be headed to Yankton, S.D., on Saturday for a 4 p.m. CT matchup with Mount Marty (7-20, 0-11 GPAC). There will also be a junior varsity contest at 2:30. In Friday action, the Lancers were beaten by 24th-ranked Midland in straight sets.