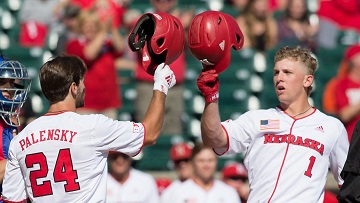 “We have a challenging schedule that will give our student-athletes the opportunity to compete against some of the top teams in the nation at some of the top venues that college baseball has to offer,” Bolt said. “The Big Ten continues to improve every year and our schedule leading up to conference play will help us get ready to compete in our league. I’m excited for our home slate and look forward to playing in front of our great fans at Hawks Field this spring.”

The Huskers open their 53-game schedule against former conference foe Baylor in Waco, Texas (Feb. 14-16). Last season, NU won 2-of-3 on the road against the Bears before both teams qualified for the NCAA Tournament.

NU continues its season-opening road trip when the Huskers visit Arizona State for three games from Feb. 28 to March 1 in Tempe, Ariz. Last season, the Sun Devils earned a spot in the NCAA Tournament after the Huskers won 2-of-3 in Lincoln during the penultimate weekend of the 2019 campaign.

Nebraska’s home opener is scheduled for March 6 against Columbia, as the first of 24 games at Hawks Field at Haymarket Park in 2020. The four-game set between the Huskers and Lions continues with a doubleheader on March 7 before the series finale on March 8. NU continues its six-game homestand against Northern Colorado on March 10 and 11.

The Huskers hit the road to face Wichita State (March 13-15) and Kansas State (March 17). Earlier this fall, the Huskers defeated the Shockers, 10-8, in a 12-inning exhibition game on Sept. 21. The Huskers and Wildcats are scheduled to meet twice in 2020, as K-State visits Lincoln on March 31.

Nebraska’s four conference road series are against Maryland (April 3-5), Purdue (April 10-12), Michigan (April 24-26) and Indiana (May 14-16). Last season, the Wolverines advanced to the finals of the College World Series before finishing as the national runner-up. The Hoosiers won the Big Ten regular-season crown in 2019 before qualifying for the NCAA Tournament.

NU has four games against intrastate foes in 2020. The Huskers visit Creighton on April 7 and April 28 at TD Ameritrade Park in Omaha, Neb., and host the Bluejays at Hawks Field on April 21. The Huskers host Omaha on April 14 in Lincoln. The Bluejays and Mavericks both qualified for the NCAA Tournament last season.

Nebraska baseball fans interested in purchasing 2020 season tickets can sign up for the request list today by visiting Huskers.com/tickets. Current season ticket holders will receive renewal information in the near future. Improvements and additional purchases will be available in January during the “Seat Yourself” process, which allows fans to choose their own seats at Hawks Field.