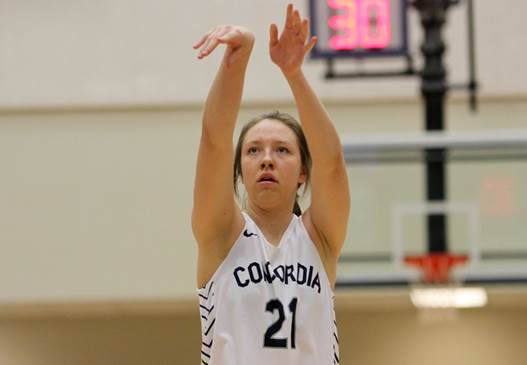 SEWARD, Neb. – Saturday’s opponent may go by the nickname the Roadrunners, but it’s the top-ranked Concordia University women’s basketball team that continues to leave foes in the dust. NCAA Division II Metropolitan State University of Denver had the size advantage. It just could not account for the quickness and pressure put on by the Bulldogs, who forced 37 turnovers and won, 81-65, inside the Auraria Event Center in Denver.

Officially, the contest goes down as an exhibition for both sides. Fourteenth-year head coach Drew Olson’s squad remains undefeated at 7-0.

“I thought we did a decent job of getting the pace to go how we wanted it,” Olson said. “But we never really felt like we were in good rhythm like we had been over the last couple days, partly because they’re a really good defensive team. They’re a little bit longer and bigger and we’re on the road for the first time in a long time. I thought it was a really good thing for our team to have a closer game and to be on the road to get us ready for at Morningside.”

Defending national champions of NAIA Division II, Concordia is proving it can compete on any level of collegiate basketball. The Bulldogs just missed out on an upset of Creighton University in a double overtime defeat (also an exhibition) on Oct. 22. In this particular matchup with an NCAA opponent, Concordia essentially led wire-to-wire and pulled away late with the help of Mackenzie Koepke’s long range shooting.

It was a battle of contrasting styles. The Bulldogs were outrebounded, 55-29, but overcame that disadvantage by forcing 37 turnovers. MSU Denver trailed by just five (59-54) early in the fourth quarter before Concordia kicked it into gear. A Mackenzie Helman steal and dish to Grace Barry initiated a 10-2 run that put the Bulldogs in control, 69-56. That spurt was capped by back-to-back treys from Delani Fahey and Koepke.

The Roadrunners are officially 0-4 this season but own an exhibition win over MidAmerica Nazarene University (Kan.), which is ranked 14th in NAIA Division I. MSU Denver’s length played a role in Concordia shooting only 35.1 percent (26-for-74) from the floor. The Roadrunners had three players in double figures: Bree Wellington (17), Jaela Richardson (15) and Mariah Schroeder (13).

“I think both teams played it to win,” Olson said. “It wasn’t like we looked at it as an exhibition. Both teams competed hard … I thought in the second half Koepke and Delani allowed us to extend the lead. It was a six-to-10 point game the whole time and then they hit some shots to extend the lead. That’s when our defensive pressure picked up. It probably wore on them because they’re not used to getting pressed like we do.”

The Bulldogs made the trip out to Denver on Friday evening and will spend Saturday night there for some team bonding. Concordia will turn around quickly for a battle at 19th-ranked Morningside (6-2, 3-1 GPAC) at 6 p.m. CT on Tuesday. In Saturday action, the Mustangs fell at home, 76-69, to No. 16 Hastings.