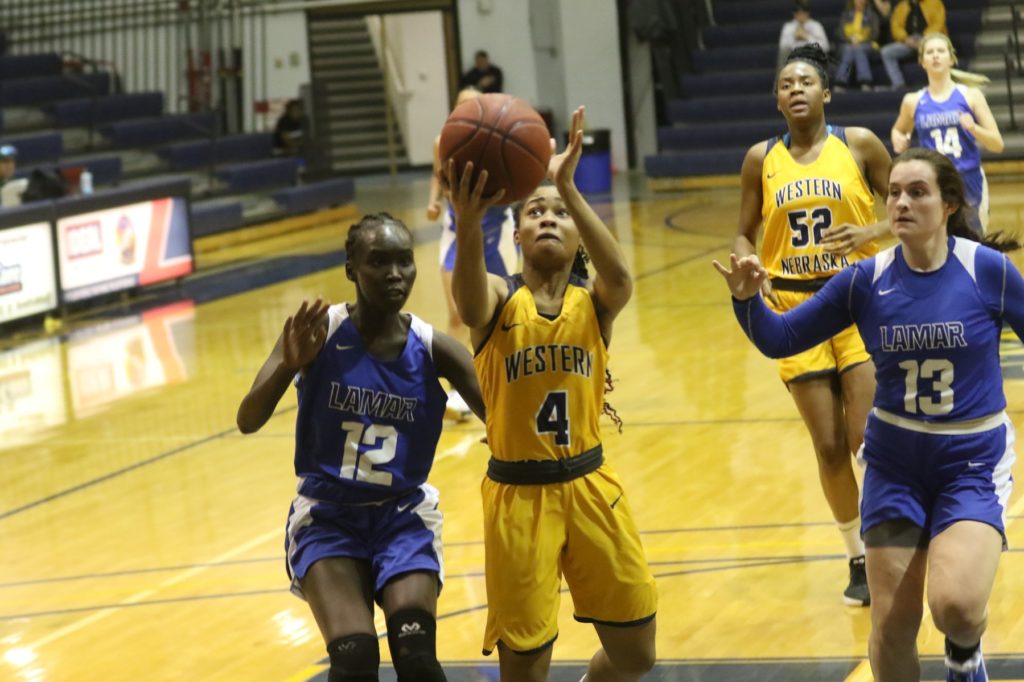 The win moves the Cougars to 25-1 overall and winners of their last 23 straight. More importantly it keeps WNCC undefeated in conference play at 9-0 with a big South Sub-region contest on Friday at Otero, who is 8-1 in conference play and 20-4 overall.

WNCC head coach Chad Gibney was pleased with how his team took care of business on the road.

“We did a nice job competing and setting ourselves up for a showdown on Friday,” Gibney said.

“There’s been a lot of people and players that have contributed to 100 wins,” Gibney said. “I’m very thankful for everyone who has helped make WNCC the special place that it is.”

WNCC had all 10 players that played score on the night with two in double figures and another four with eight or more points.

Tishara Morehouse led the way with 16 points while also getting three assists and six steals.

Yuliyana Valcheva finished with a double-double with 13 points and 11 rebounds.

After somewhat of a slow start, WNCC led 11-7, the Cougars heated up and raced to a 24-14 lead after the first quarter.

The Cougars played good defense in the second quarter, while struggling a bit on offense, outscoring Trinidad 13-8 to lead 37-22 at halftime.

The second half was where WNCC showed what team they are that is ranked No. 2 nationally. After Trinidad cut the lead to 13, 41-13, the Cougars went on a 22-6 run that saw back-to-back 3-pointers by Morehouse and Campbell to lead 63-34 after three periods.

WNCC never looked back in the fourth quarter, outscoring the Trojans 21-14. WNCC led early in the fourth at 71-36 and led 77-42 after back-to-back Dezmonea Antwine buckets.

A big key in the game was rebounding and 3-point shooting. WNCC out-rebounded Trinidad 51-36 behind 11 from Valcheva and seven from Mahoukou.

WNCC also buried 10 treys, led by Joplin’s three and two each from Duplessis, Campbell, and Morehouse.

WNCC will be back in action Friday for the last regular season contest on the road in La Junta, Colorado, to face Otero in a game that could decide the No. 1 south seed. The top seeds in both the North and South conferences get a first-round bye in the regional tournament.