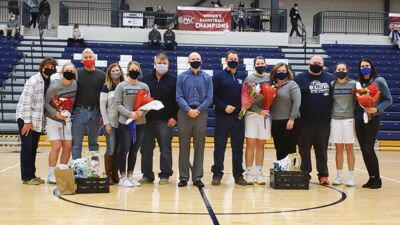 SEWARD, Neb. – This one won’t rank amongst the classic battles between the perennially powerful Concordia University and Hastings women’s basketball programs. A massive run in the second quarter allowed the 22nd-ranked Bulldogs to cruise to a 79-64 victory over the visiting Broncos on Wednesday (Feb. 10) evening. Prior to tipoff, Concordia honored a senior class of Taylor Cockerill, Rebecca Higgins, Emily Jones and Faith Troshynski.

Head Coach Drew Olson’s squad has won five in a row and seven of its last eight outings. The Bulldogs (17-7, 16-5 GPAC) moved one step closer to locking up the No. 2 seed for the GPAC tournament coming up later this month.

“We wanted to mix things up on Hastings and get them off balance and see what was going to be more effective,” Olson said. “After that first quarter we knew to feed it inside and use Kayla (Luebbe) a little bit more. That second quarter was dominant – third quarter we were good too. I thought the fourth quarter we were mixing lineups and our flow maybe wasn’t great. We’ll take the win.”

Concordia had Hastings overmatched. The Bulldogs had little trouble finding the shots they desired while shooting at a 55.6 percent clip for the first half. Early in the second quarter, the Broncos owned a slight 17-15 lead. Concordia responded with a 26-4 run that put it in front, 41-21, at the half. The advantage grew as large as 28 points never dipped below 15 the rest of the way.

All three senior players were part of the starting lineup on Wednesday. While the starting five looked a bit different, usual suspects like Cockerill (15 points and four steals) and freshman Taysha Rushton (17 points; three 3-point field goals) feasted on a loose Hastings defense. In the post, sophomore Kayla Luebbe enjoyed a fine night that saw her put up 14 points on 6-for-8 shooting from the floor.

The approach to this game represented another example of Concordia’s growing maturity. It had to sweat out a 73-66 win at Hastings back on Dec. 2. These Bulldogs are playing too well and with too much confidence to allow for a slip-up down the stretch.

“It’s a pretty special day,” Higgins said of senior night. “It’s always a special day to play here, to play at Friedrich Arena, especially with this team. From the beginning of the year we’ve really had to grow together. I think that’s made us really tight. Every opportunity we have to play with each other is pretty special.”

Hastings is now 1-12 in its last 13 games versus Concordia. The Broncos (6-16, 5-15 GPAC) were limited to 27.5 percent shooting on Wednesday. Off the bench, Elle Danley recorded a team high 11 points. Hastings has struggled mightily since starting out 3-3 in conference play.

The Bulldogs will now wait until Saturday, Feb. 20 for their regular-season finale, which will put them up against Doane (5-19, 3-18 GPAC). Tipoff on that date is set for 2 p.m. CT from Friedrich Arena. In this season’s first meeting, Concordia knocked down 17 treys in a 111-52 rout of the Tigers in Crete.

“I think it’s a big stretch for us,” Olson said. “We can too relaxed and start taking step backwards. You either get better or you get worse each day. We have to keep getting better. Our goal isn’t just to beat Doane or get second (in the GPAC). We’re looking big picture with nationals and stuff like that. We’re going to work really hard and hopefully get better.”