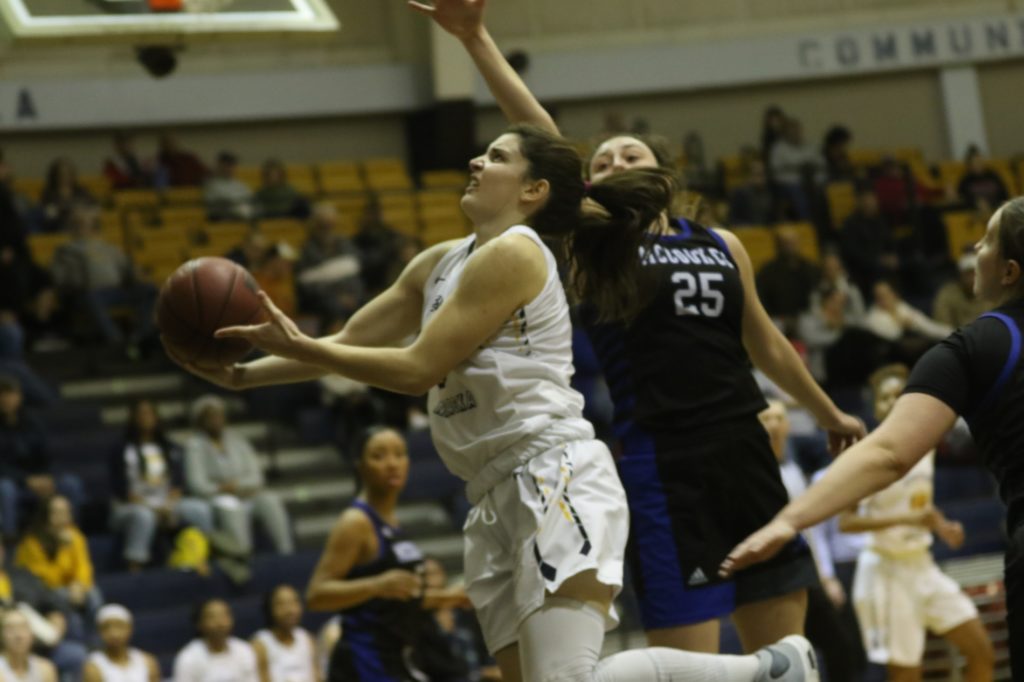 WNCC put three players in double figures while burying 12 treys in rolling to their 17th win of the season. The win moves the Cougars to 2-0 in the South sub-region.

WNCC will be back in action Saturday afternoon at 2 p.m. when the Cougars host Iowa Western Community College.

The Cougars were led by Tishara Morehouse with 28 points followed by R’Manie Pulling with 21 points.

Pulling, who buried three 3-pointers in the contest, said the team was focused from the beginning in getting the win.

“We played really good today,” the sophomore from Denver said. “We just executed and played good defense. We shared the ball.”

WNCC dominance started in the first quarter. WNCC held a slim 7-4 lead and then went on a 18-2 run to lead 25-6 after one quarter.

Pulling said they were ready to play against a McCook team that entered with a 10-3 record.

“Coach Gibney let us know how important it was to be locked in from the beginning so that is what me and my teammates did,” Pulling said. “We came into the game locked in and that is how we set the town.”

Defense played a huge part in the win as well. WNCC won three of the four quarters. The only quarter WNCC didn’t win was the second when McCook outscored them 21-19. Still, WNCC held a commanding 44-27 lead at halftime.

“Our defense was one of the biggest impacts on the game today,” Pulling said.

While WNCC held a 17-point halftime lead, the Cougars quickly put the game out of reach in the third quarter, outscoring the Indians 36-13. The Cougars opened the third on a 9-0 run behind a trey from Morehouse and back-to-back buckets by Pulling and Taylor Joplin. WNCC doubled the score at the end of the third, leading 80-40.

WNCC won the rebounding battle 49 to 21. Lidsey Mahoukou led the way with eight boards followed by Morehouse with six and Georgia Berry with five.

Morehouse and Zarrea Coleman each dished out four assists in the contest.

Besides Morehouse and Pulling with double digits, Yuliyana Valcheva finished with 17 points with two treys. Mahoukou finished with eight points while Joplin had seven.

Pulling said this was a big win for her team and they need to keep improving as they get ready for Iowa Western on Saturday as well as building on their No. 7 ranking.

“It means a lot to us because a lot of the teams, from year-to-year, lose a lot of people,” she said. “But the freshmen came in and they are helping us sophomores do what is best. They are helping the sophomores get to where we want to go and being seventh in the country is now amazing.”