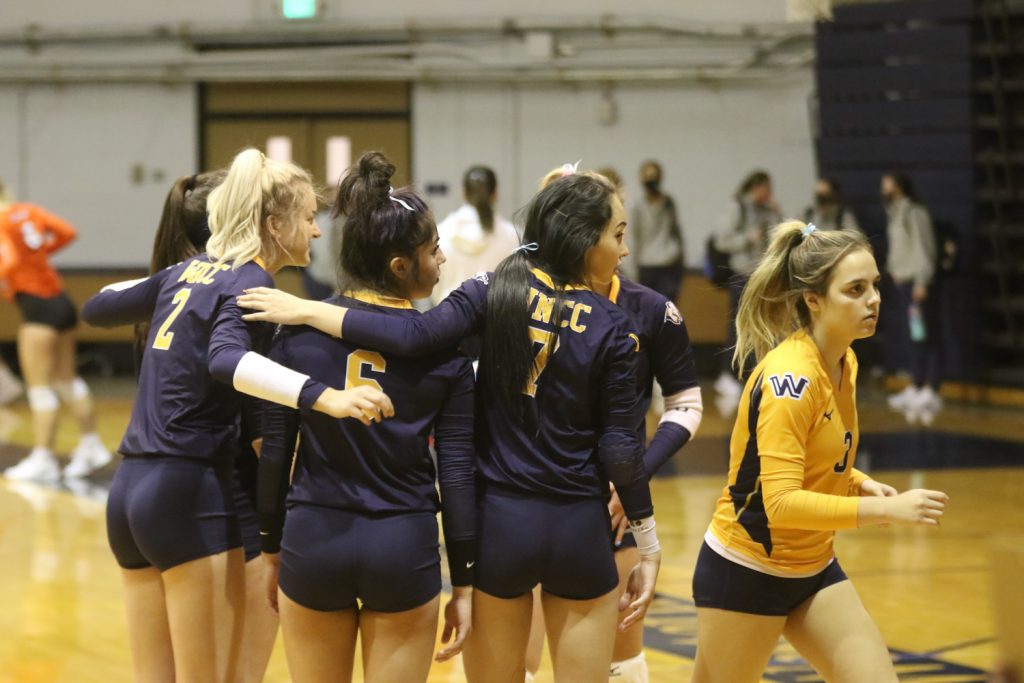 Mariah Fukamoto had the only double-double in the match, tallying 12 points and 13 digs. Andrea Tsvetenova had a near triple-double, collecting 40 set assists, nine digs, and nine points.

The hitting was well dispersed. Anuhea Kaohi led the way with 11 kills followed by 10 from Karen Cordero, and eight each from Olivia Schaub and Alex Hernandez.

The first set was tight with nine ties. WNCC trailed 11-8 and later 12-9 before Fukamoto served four points to put WNCC up 18-15. Otero came right back and tied the set at 18. WNCC went back in front 22-19 after two Tsvetenova points only to watch the Rattlers go up 23-22.

After a Cordero kill, Hernandez served a point to put WNCC up 24-23. Otero tied the first set at 24 before Kaohi hammered a kill and Cordero served the final point to give WNCC the 26-24 win.

The second set was back and forth as Otero led 12-11 and 13-12 before a Kaohi kill and two Cordero points put WNCC up 15-13. WNCC pushed the lead to 18-14 after two Macey Boggs points. The Cougars extended the lead as Schaub had a kill and then Fukamoto had four points for a 23-15 lead. WNCC won the second set 25-17 on a Hernandez kill.

The third set was similar to the first two with the start. Otero led 7-5 before WNCC tied the set at 7-7 on a Cordero point. Later, Boggs had an ace serve for a 9-8 lead and Fukamoto had two points for a 12-9 lead.

Otero fought back, slicing the lead to 16-15. It was short-lived as Boggs had another point and Fukamoto had another point for a 20-16 lead. The Rattlers didn’t quit as they went back in front 21-20 and led 23-21 on an ace serve.

WNCC stopped the scoring spree with a sideout and then Tsvetenova had three points for the match win.

WNCC also had six digs and six points from Cordero in the win while Anabelle Gillen had eight digs; Boggs had two digs and five points; Hernandez had 11 digs and three points; Kaohi had six digs; and Angel Nahinu had three kills.