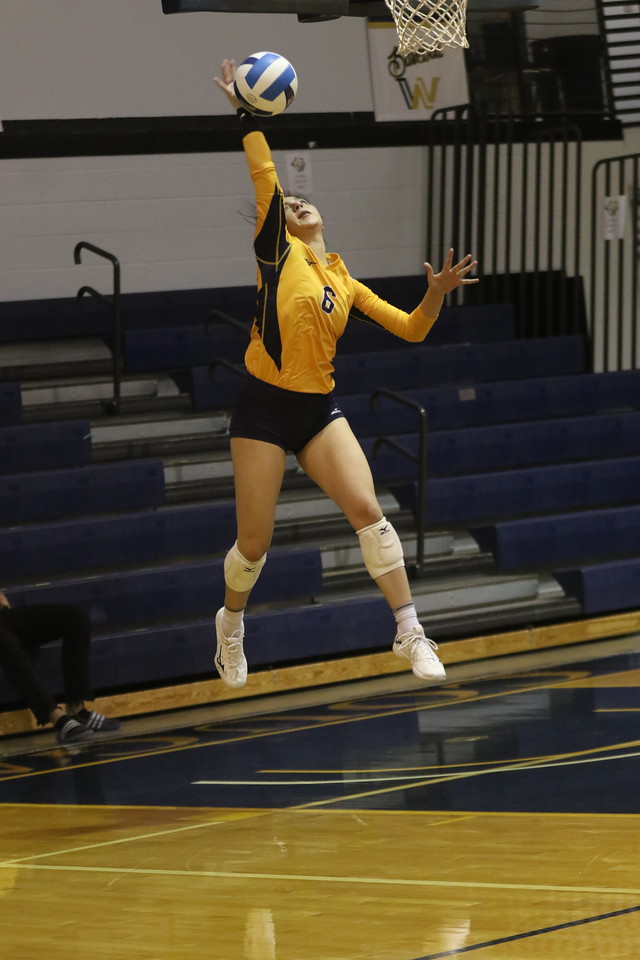 Olivia Schaub, who had eight kills in the win, said it was a good performance from her team.

“I definitely think we had the home court advantage which helped a lot. This is only our second home game of the season so we are really excited to be at home and play at home,” Schaub said. “I think serving, passing, and the offense and defense overall. Everything came together and we played really well.”

Schaub said it was a big difference the last time they faced Casper and lost to the Thunderbirds compared to Tuesday night.

“A big difference was that our serving and passing was a lot better,” the Gering High graduate said. “And we switched up the offense a little bit so everyone was getting set and we weren’t getting blocked as much.’

Serving was a big key in the game, too, as the Cougars finished the match with a total of 11 ace serves. Karen Cordero had four aces, which was half her eight points. Andrea Tsvetanova finished with 10 points, while Alex Hernandez had six, and Macey Boggs and Anabelle Gillen each had five.

“I think our serving tonight was really great,” Schaub said. “That helped us a lot.”

The first set was tight with WNCC holding a slim 8-7 lead. Things changed after that as Gillen served two points for an 11-7 lead and led 13-9 on a Tsvetanova ace. Moments later, Cordero had back-to-back aces for an 18-11 lead.

WNCC went up 21-13 on two Boggs points, including an ace. WNCC was in striking distance of closing out the first set at 23-15 after two Schaub kills. Casper came back ass they went on some nice service runs of their own to cut the lead 20 24-21. WNCC got the final point, however, on a block for the 25-21 win.

Casper led 1-0 in the second set, but quickly changed things as Hernandez served for three points, including two aces for a 4-1 lead. WNCC went up 15-7 on three Tsvetanova points, including an ace serve that hit the net and rolled over and fell to the floor. WNCC added to the lead with Hernandez getting two points and an 18-8 lead.

Cordero then hammered a kill and then served four points, including two aces, for a 23-9 lead. WNCC won the second set 25-12.

Cordero and Kaohi finished with double figure kills. Kaohi had 12 kills while Cordero finished with 11. Schaub was next with eight and Hernandez had three.

WNCC also had four solo blocks, two each from Cordero and Tsvetanova.

Schaub said they will need to work hard the next two days as they get ready for McCook and Iowa Western.

“We definitely will have to mentally and physically prepare for Friday, especially since we play two big games in the same day,” Schaub said.