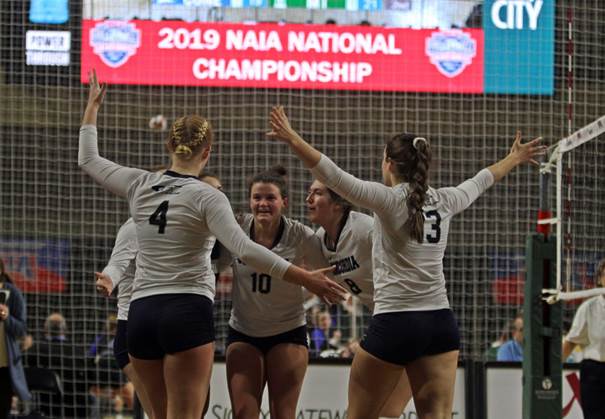 SIOUX CITY, Iowa – The 15th-ranked Concordia University volleyball team had not played a match since Nov. 13, but you wouldn’t have known it by how they performed late on Tuesday (Dec. 3) night. The Bulldogs displayed the calmness of NAIA National Championship tournament veterans while handling No. 19 Montana Tech, 25-16, 22-25, 25-14, 25-18, at the Tyson Events Center in Sioux City, Iowa. The victory was the program’s first ever at the national tournament.

In just his second year as head coach, Ben Boldt has Concordia making waves like never before. The Bulldogs (24-6) passed the test in their first of three matches in pool play on the national stage.

“We’re trying to focus on the controllables,” Boldt said. “I told them in that last set – we got out to a big lead and they started climbing back in. Once we called that timeout it could either go 25-18 or it could go 25-23. We did a really good job of serving well and keeping our composure.”

By night’s end, the Bulldogs had outhit the Orediggers, .322 to .156. It was a mostly dominant outing from senior Emmie Noyd and company. There were some adverse moments faced in the second set and win Montana Tech made a run in the fourth set, but Concordia always had an answer. Noyd powdered a match high 16 kills as one of five Bulldogs with at least eight kills.

Concordia’s serve game (eight aces) put it in good position and the attack never dipped below a .222 hitting percentage in any of the four sets. A nice crowd of Bulldog fans that made the fairly short journey were treated to a rather sharp effort.

“During practices our coaches really focused on knowing what our strengths are and building on our skillset,” Noyd said. “Just the different shots we were able to hit tonight really set it up for us to win tonight. I think that was really the difference in how we were able to go into it so confident in this match.”

Junior Kara Stark blasted 11 kills while Camryn Opfer (nine), Kalee Wiltfong (nine) and Arleigh Costello (eight) were close behind. Concordia’s advantage at the net surfaced in obvious ways. Wiltfong was in on eight blocks and the Bulldogs owned a massive 13-3 edge in blocks. Fittingly, Costello and Wiltfong combined on a denial for match point.

Concordia deserved at least a little time to celebrate. The 2015 Bulldogs are the only other team in program history to qualify for the national tournament. Boldt actually saw a turning point in his squad going way back to the preseason.

“Our very first practice of preseason was not great,” Boldt said. “But after that they realized we need to get ready to go. The rest of the practices were all really good. Great teams are player-led and they are holding each other accountable.”

Wednesday’s pool play: Up next for the Bulldogs is a matchup with Kansas Collegiate Athletic Conference regular-season champion University of Saint Mary (Kan.) at 8 p.m. CT on Wednesday. The Spires (30-11) were defeated by third-ranked Indiana Wesleyan University, 25-16, 25-18, 25-18, in Tuesday night action.