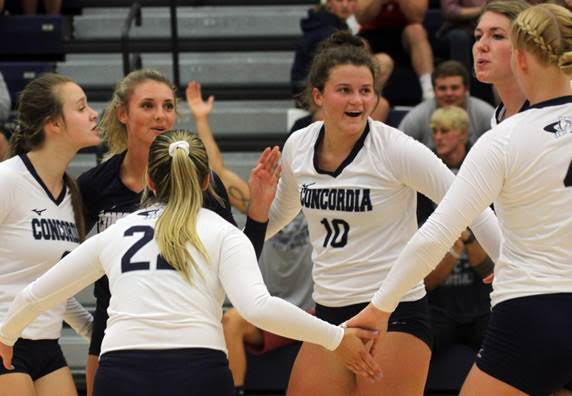 Head coach Ben Boldt’s squad has completed the opening week of the 2019 season at 4-0 without dropping a single set. The victory over Corban marked the program’s first over a top 25 opponent since November 2015.

“That was one of my favorite blocking matches of the year that we’ve had so far,” Boldt said of the Corban match. “We really did a great job of controlling where they can attack. Our block and defense was really coordinated in that match. We were taking away the line with our block. We were digging really well across court. When that happens, the setting and the hitting kind of takes care of itself.”

Noyd and freshman Camryn Opfer are a major part of that blocking effort. Together they helped the Bulldogs earn an 8-4 blocking advantage over Corban, a 2018 national tournament qualifier. Noyd has elevated her game in her final collegiate season. On Saturday, the Shelby, Neb., native floored 23 kills, including 15 in the weekend capper. She hit .440 for the week. Meanwhile, Opfer racked up 11 kills (.348 hitting percentage) and 10 digs versus the Warriors (3-3).

Defensively, Concordia played especially well in the opening set versus Corban, which had eight kills compared to nine attack errors during that stretch. The next two sets were might tighter. In the second one, the Bulldogs rallied from down 12-7 and put it away with Raymi Marquardt’s ace. In the closing set, Concordia withstood a late Warrior push and ended the threat with an Opfer kill.

Sure there are things that can be better, but the opening week of the season has been an undeniable success. Said Boldt, “Some serving we definitely have to clean up. We had six aces and seven errors. I would like to have a couple more aces to that error ratio, but you know what, we’ll take a three-oh win.”

The late afternoon thrills came several hours after a bit of a sluggish start in the match with Wayland Baptist that got underway at 9 a.m. Concordia allowed the Pioneers (0-3) to rally and make the first set a tense one. Whatever momentum Wayland Baptist might have had was crushed in the second set when the Bulldogs hit .517. In this contest, Noyd, Arleigh Costello and Kalee Wiltfong shared the team lead with eight kills apiece.

“We talked to our team about preparing for the future. We’re going to have to play matches at 9 in the morning,” Boldt said. “We want to be great. We want to be great at all points in time. That was our message to them. Hopefully we come away learning how to be great and how we need to prepare.”

Among other stat leaders on the day, Tara Callahan amassed 66 assists while the digs were spread around to the likes of Kaylie Dengel (19), Camryn Opfer (18) and Marissa Hoerman (17). Noyd, Kara Stark and Kalee Wiltfong each had a hand in at least five blocks.

The most recent victory over a top 25 team (according to ratings at the time matches were played) was a four-set triumph over No. 17 Northwestern on Nov. 7, 2015. The ‘15 Concordia squad wound up playing in the opening round of the national tournament.

The next time out the Bulldogs will be back inside Walz Arena as part of the Bulldog Bash. The event will feature seven teams and 11 total matches. In action on Friday (Aug. 30), Concordia will take on Waldorf University (Iowa) at 7 p.m. CT.