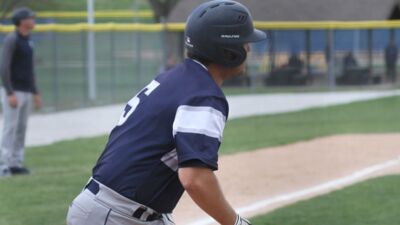 DICKINSON, N.D. – After demoralizing Dickinson State University (N.D.) in Saturday (March 13)’s game 1, the Concordia University Baseball team needed some late game heroics to pull out the second contest and earn a four-game weekend sweep. A game-tying two-run homer from Jesse Garcia and a go-ahead RBI double by Beau Dorman made the difference in a 7-6 win to cap Saturday’s action. In game 1, the Bulldogs piled up 23 hits in a 24-0 white washing.

“It was really good to play a tight game, feel some pressure and see how we can handle that moment,” Dupic said. “I was pleased with our ability to come back and get that win. Their pitcher did a really nice job, but we were able to hang with it. We got some really big swings late in the ballgame from Jay Adams, Jesse Garcia and Beau Dorman. (In relief) Nathan Buckallew did a great job. He put up three zeroes for us to give us a chance to make the comeback and Shane Whittaker closed it out.”

The final game of the set was the only one that came with any drama or tension. The Bulldogs fell behind 6-0 after four innings and still trailed 6-1 heading into the sixth (in a seven-inning game). The rally got kick-started by Dorman’s two-run triple in the sixth. He then scored on a sac fly by Ben Berg. An inning later, Garcia deposited a laser of a homer over the left field wall to knot the score, 6-6. Joey Grabanski then walked and scored on Dorman’s clutch RBI double.

Other than a rough third inning, Concordia’s pitching was solid. Buckallew allowed two hits without a walk over his three shutout frames (four strikeouts). He then handed the ball to Whittaker, who did not surrender a hit or walk in two scoreless innings. Whittaker earned the win while striking out four.

Game 1 was very different. The Bulldogs put up 10 runs in the top of the first and never looked back. Of their 23 hits, 10 went for extra bases, including the homer by Teyt Johnson, who drove in six runs. In the blowout, five Concordia hitters collected at least two hits:

Dupic used four pitchers to get through the first game. Lukas Diehm started and went four scoreless innings (seven strikeouts) with two hits and one walk allowed. Nolan Johnson, Ryan Samuelson and Zach Pinkerton threw a hitless inning apiece out of the bullpen. Collectively, they combined on a two-hit shutout.

The Bulldogs are slated to open up conference play next Saturday (March 20) when Midland (10-9) will be at Plum Creek Park for a 1 p.m. CT doubleheader. Due to last season’s shutdown, Concordia has not played an official home game since May 4, 2019, when it hosted a GPAC tournament pod.