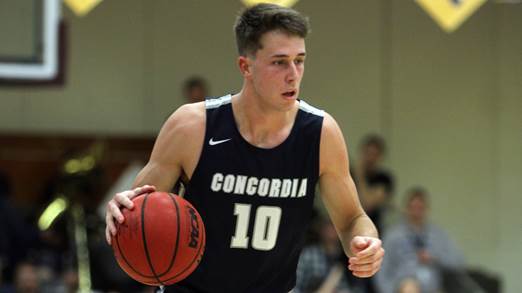 CRETE, Neb. – It’s been a five-day stretch to forget for the Concordia University men’s basketball team. The Bulldogs peppered the rims at the Haddix Center with 46 3-point tries on Wednesday (Feb. 5) night – but only 10 of them found the bottom of the net. Star Anthony Laravie and the pesky Doane zone were enough to lift the home team to victory, 64-59.

Head coach Ben Limback’s squad has been held below 60 points in back-to-back losses within the conference. The Bulldogs (17-8, 8-7 GPAC) had hoped to complete a regular-season sweep of the Tigers.

“We just didn’t shoot it with confidence,” Limback said. “Unfortunately we just couldn’t snap out of it in time. We made a nice little comeback. We missed some inside stuff too and had some chances. You have to give Doane a lot of credit. They outplayed us and we just weren’t good offensively.”

Concordia shot 34.3 percent (24-for-70) from the floor just a few days after turning in a sub-30 shooting percentage in a loss at No. 10 Dakota Wesleyan. The Bulldogs have run hot and cold this season along with their perimeter game. It had been mostly hot during a recent stretch of 10 wins out of 11 games. Concordia wasn’t able to slice and dice the Doane zone in an efficient manner. The Bulldogs also turned it over 11 times in the first half in the face of frequent full-court pressure.

On the plus side, sophomore guard Justin Wiersema gave an effort-packed 30 minutes of play. He recorded 17 points and a personal high 12 rebounds for his first career double-double. Meanwhile, seniors Tanner Shuck and Brevin Sloup supplied 12 points apiece. Concordia got only seven points from its bench.

Doane (7-18, 2-13 GPAC) led for the majority of the second half and enjoyed an advantage as large as seven points. The outcome hung in the balance up until the last few seconds. After the Tigers turned the ball over leading 62-59 with 7.2 seconds on the clock, the Bulldogs got one more chance. However, Shuck’s 3-point trey missed the mark and Tyler Sullivan made two free throws to put the game away.

Wiersema went 8-for-14 from the floor, meaning he was responsible for one-third of the team’s field goal makes. Said Limback, “He turns it on all the time. He doesn’t waiver. We just need other guys to feed off of it.”

A junior from Omaha, Laravie is the go-to guy in black and orange. He posted a game high 23 points and grabbed nine rebounds in his 38 minutes of action. Joe Burt added 14 points and Miguel Lopez contributed 10. Doane very nearly came away from Walz Arena with a win back on Dec. 4 when the Bulldogs escaped with an 83-77 double overtime triumph. Mathematically, the Tigers still have a shot at qualifying for the conference tournament, but they need a lot of wins and a lot of help down the stretch.

Another pivotal road game awaits on Saturday when the Bulldogs will be at Dordt (18-8, 9-7 GPAC) for a 4 p.m. CT tipoff in Sioux Center, Iowa. Both sides continued to receive votes in the national poll released on Wednesday. Concordia will go for a season sweep of the Defenders having defeated them, 91-79, in Seward on Jan. 4.