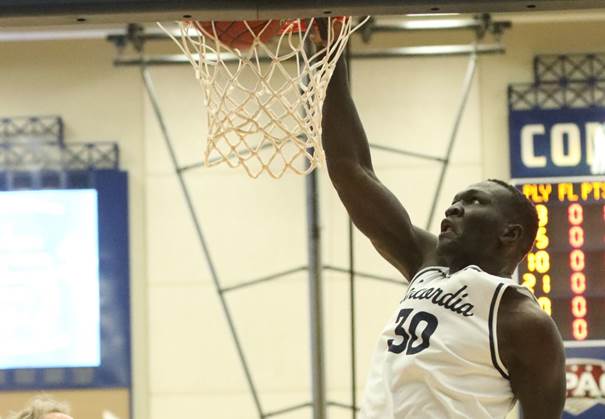 SEWARD, Neb. – The Concordia University men’s basketball team did a fine job of holding down a Dakota Wesleyan squad that features plenty of firepower. The Bulldogs just couldn’t muster enough of their own offense while slipping up in their 2018-19 home finale, 68-63, at the hands of the 18th-ranked Tigers on Saturday (Feb. 9).

The loss snapped a four-game home win streak for sixth-year head coach Ben Limback’s squad. Concordia (14-15, 6-13 GPAC) is still hoping to hold onto a top eight spot in the standings required to qualify for the GPAC tournament.

“I’m proud of our effort to come back but I’m disappointed that it had to come to that,” Limback said. “We want to see the growth happen quickly. It was nice to see our guys compete and make it interesting. We just have to get better. We have to keep fighting.”

Things have been a bit of a work-in-progress offensively. The Bulldogs heated up enough in the second half to inject some drama into the affair. Instead of wilting down 47-27 in the second half, Concordia roared back. It chiseled that deficit to down to five when Gage Smith dropped home a triple with 38 seconds left. Smith gave the Bulldogs a lift by knocking down three treys off the bench.

When it’s needed, Tiger star Ty Hoglund can put a team on his back. He racked up a game high 28 points. He helped keep Concordia at arm’s length by netting 12 points over the final 10:04 of game time. With one last gasp in the final seconds, Brevin Sloup misfired on a 3-point attempt and the clock expired during a scrum for the rebound.

If nothing else, the Bulldogs gave a much better account of themselves than they did in a 105-56 blowout loss at the Corn Palace back on Dec. 15. This time around Concordia fought back by shooting 53.1 percent in the second half. It was a drastic turnaround from a first half that saw the Bulldogs score just 16 points on 7-for-29 (.241) shooting. They went the final 6:29 of the half without scoring a single point.

The Tigers needed this one in their quest to reach the national tournament. On Saturday, Collin Kramer (14 points, four assists), Larson Mason (14 points, 13 rebounds) and Aaron Ahmadu (12 points, five assists) aided the cause led by Hoglund.

The Bulldogs will wait a full week before closing out the regular season next Saturday (Feb. 16) at Mount Marty (6-21, 2-16 GPAC). The game time in Yankton, S.D., has been bumped up to 3:30 p.m. CST from the originally scheduled 4 p.m. tipoff. Concordia hopes to avenge a 70-69 home loss handed to it at the buzzer by the Lancers on Dec. 8.

“We have a full week of practice so we have to maintain some offensive confidence, clean up our cutting action and our screening action,” Limback said. “Our guys will be battling really hard in practice. Whoever’s out there, I feel like we’re getting better.”