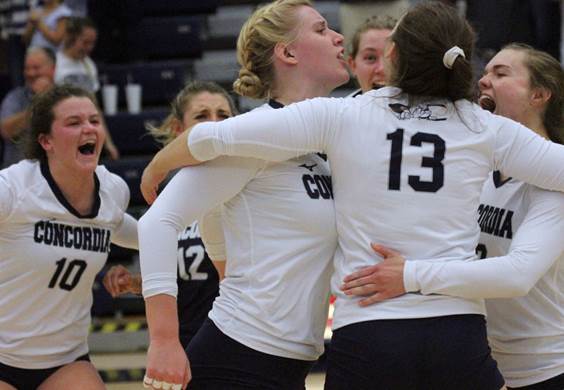 SEWARD, Neb. – No further evidence is needed at this point. Concordia University volleyball has proven its case. This team is good. The Bulldogs won for the fourth straight outing while finishing strong in a 25-23, 20-25, 25-20, 25-16, win over 22nd ranked Dordt inside Walz Arena on Saturday (Oct. 19). Concordia is now 9-1 at home this season.

Head coach Ben Boldt’s squad is demanding to be placed inside the NAIA’s top 25 with its play on the court. The Bulldogs have improved to 19-3 overall and to 8-3 in the GPAC (third place).

“In the middle of the match, I think Dordt really upped their serving game,” Boldt said. “It had a domino effect on us upping our serving and passing game. When that happened our offense really took off. That was as close to clicking on all cylinders that I’ve seen our team towards the end of that match. That was really fun to watch.”

The Defenders (15-8, 6-5 GPAC) graduated a great deal of talent from last year’s GPAC championship squad, but they remain a strong team. Head coach Chad Hanson’s squad took Northwestern to five sets before falling on Wednesday night. But Camryn Opfer and her teammates were up for the challenge. Concordia slammed the accelerator and turned a close 14-12 score in the fourth set into a runaway. Arleigh Costello blocked Dordt’s leading attacker, Karsyn Winterfeld, for match point.

As Boldt said afterward, he will take this type of production every time out from Opfer. Her final stat line glimmered: 14 kills, 14 digs, two blocks and a .467 hitting percentage. She played a major role in the Bulldogs hitting .419 in the fourth set. They outhit Dordt for the match, .271 to .160.

“(Coach Boldt) always talks about communication, effort, attitude – the three things we can control,” Opfer said. “I felt like our communication and our effort was great. We were getting things up that sometimes we don’t normally go for. We were just going, pushing and communicating. I think that’s what helped us at the end.”

Concordia gave the Defenders trouble with its block. Senior middle blocker Emmie Noyd contributed to on eight of the team’s 15 blocks (Dordt totaled nine blocks). Offensively, Kara Stark (12) and Noyd (10) joined Opfer with double-figure kill numbers. Tara Callahan worked the ball around for 45 assists to go along with eight digs and two blocks. Back row stalwart Marissa Hoerman chipped in with 19 digs.

In Boldt’s mind, the results taking place right now are simply due to a continuation of a focus on the process that must be followed in order to become a champion. The Bulldogs own seven wins over teams that were ranked in the top 25 at the time the matches occurred.

“I don’t necessarily feel like it’s different,” Boldt said when comparing the 2019 squad to the 2018 edition. “Obviously our results are different. Our focus is our process. It’s our attitude, our effort and our communication. I still feel like we’re coaching the same things that we did last year. We’re playing different people this year and we have another year under our belts with our tempo and our expectations and standards.”

Winterfeld paced Dordt with 14 kills while teammate Ally Krommendyk added 13. Hannah Connelly led all players with 23 digs. The Defenders had won six-straight in the series with Concordia dating back to 2014.

The Bulldogs will return to action next weekend (Oct. 25-26) with trips to Briar Cliff (13-13, 3-9 GPAC) and Mount Marty (7-19, 0-10 GPAC). Just five matches remain on the regular-season slate as Concordia attempts to keep pace with the top of the league. Northwestern (10-0 GPAC) and Jamestown (8-1 GPAC) are the only teams that the Bulldogs are looking up at.